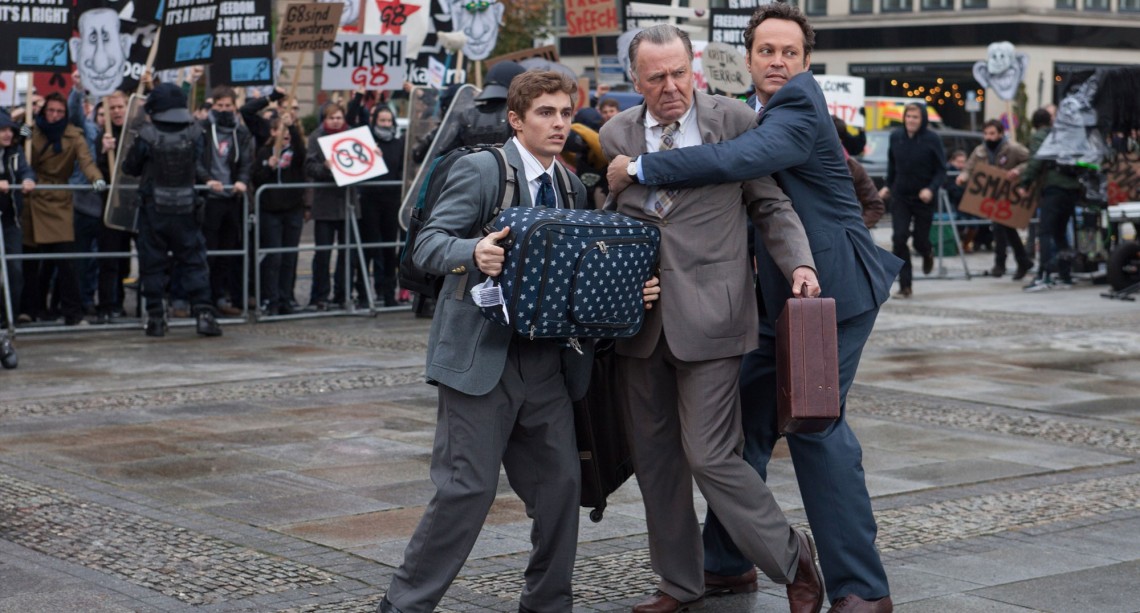 There are details about Ken Scott’s Unfinished Business worth respecting, or at least admiring. Scott has made a movie rooted in an indistinct business environment in which a woman holds a position of top authority; she’s allowed to be bluntly, even crudely alpha without being caricaturized or defamed for it, at least until an unfortunate display of Dave Franco’s tuches during the film’s denouement. And for as many times the film revels in the sight of bare breasts, it also cares enough to show off the male member in full view for the benefit of punchlines, which is sort of unexpected given how wobbly studios are with depictions of all things penile.

At this point, you can probably tell that Unfinished Business isn’t a particularly good movie; these are silver linings a person really has to reach for to find and appreciate them. On that same token, this isn’t a particularly bad movie, either, but it’s blandly drawn, awkwardly paced, and contains a real scarcity of good gags, visual, verbal, or otherwise. A comedy production can be many things – acrid, sweet, joyful, melancholy, sly, stupid, outrageous, refined – but it absolutely must be funny, which is such an obvious trait that being forced to spell it out in a sentence is sort of embarrassing.

In Unfinished Business, Dan Trunkman (Vince Vaughn) breaks free from his employer, Chuck Portnoy (Sienna Miller), and strikes out on his own in the swarf game. (Swarf, in case you’re interested, is an actual thing, but you’re not, so let’s leave it alone.) Dan’s company, Apex Select, boasts a staff of three, including him; his associates are Timothy McWinters (Tom Wilkinson), an older gent with a pervy streak a mile wide, and Mike Pancake (Dave Franco), a character who screenwriter Steven Conrad appears to have created just as an excuse to bag on intellectually disabled people. The three of them are on their way to securing an Important Business Deal, but Chuck butts in on the action to give the guys competition and thus sets their road trip off-kilter, all the better to engage in naughty European hijinks.

Unfinished Business is at its best, so to speak, when focused on Wilkinson, a well-regarded actor generally associated with high bearing. Timothy isn’t given much motivation to do any of the things he does; every action he takes is in service to the idea that sexagenarians smoking weed and ordering sex maids is hilarious. With a guy like Wilkinson in the role, that lazy conceptualization works, but only because it’s Wilkinson. You haven’t lived until you’ve heard Tom Wilkinson wax poetic about wheelbarrowing. Frankly, Scott and Conrad are more obsessed with sex positions than Timothy is, but at least Wilkinson gives their puerility some deadpan pizazz.

The rest is a bust. Vaughn does his Vaughn thing, which is fine if you’re still into that. He is, at certain points, afforded chances to show some surprising sweetness, as Dan’s two kids are both dealing with school bullies, a theme the film does a impressively half-assed job of bleeding into its A-plot. Mike, meanwhile, is so inept that we feel guilty for finding him irritating. It’s not that he’s a bad guy but rather that Unfinished Business treats him with shameful mean-spiritedness. He’s barely even a character, though that word – “barely” – accurately describes just about every other element of Scott’s work from tip to toe. Comedies this toothless and safe are a dime a dozen; it’s tempting to be outraged over the film’s worst offense, but its myriad trivial offenses are so unrelenting that it barely seems worth the effort.