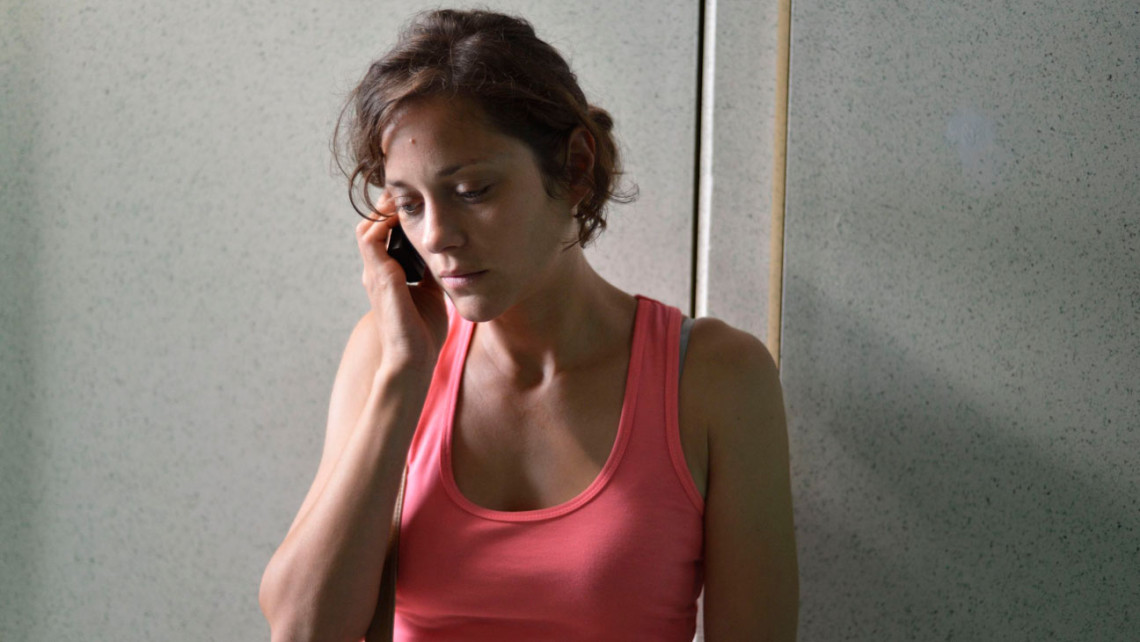 In discussing Jean-Pierre and Luc Dardenne’s altogether remarkable Two Days, One Night, it’s indeed tempting to praise the movie for all the things it doesn’t do. This is a film of uncommon emotional directness, of simple truths presented unadorned. The Belgian brothers have been cranking out one small-scaled social realist triumph after another with such clockwork regularity, it’s hard sometimes not to take them for granted, i.e. this being their first masterpiece since the last one.

Two Days, One Night is a departure for the Dardennes in that it’s got a big movie star and a catchy hook. Marion Cotillard stars as Sandra, returning to work at a solar panel factory after medical leave following a nervous breakdown. Unfortunately, during her time away, the business realized it could get by just fine without her, so the boss presents Sandra’s 16 co-workers with an ultimatum: if the majority of them agree to give up their annual bonus, she can keep her job.

The vote is scheduled for Monday morning, and the film follows a fraught, emotional roller-coaster of a weekend in which the still-fragile Sandra goes door to door, personally imploring her fellow employees to cast ballots in her favor. It’s a humbling, humiliating ordeal, and one could easily imagine such a structure tipping into histrionics, or worse, one of those grinding Lars Von Trier kind of exercises in punitive female martyrdom.

But part of what makes Two Days, One Night miraculous is the restraint the Dardennes display. Cotillard is such a magnificently expressive actress that there’s no need for speechifying or tear-jerking Oscar clip monologues. We see every thought rolling in waves across her face, as Sandra – with the help of her deeply patient and understanding husband Manu (Fabrizio Rongione) – is just barely holding it together. The no-fuss filmmaking allows many scenes to play out in single takes, and there’s no musical score to goose along the audience’s emotions. We just sit and live with these characters for a little while until their problems begin to feel like our own.

There’s an extraordinary empathy here, as the Dardennes have no interest in passing judgment or scoring points off their creations. The fact is that Sandra is asking an awful lot from people who, in certain cases, she might not even know all that well nor even like very much. Sharply attuned to our miserable economic reality, some folks just plain can’t afford to help her out. The built-in repetition of the structure allows the filmmakers to present every possible side of the dilemma, the brush-strokes so finely detailed that at times it feels like the entirety of human experience can be found within these fleet 95 minutes.

I get that this probably all sounds like a serious downer, and yet Two Days, One Night is never depressing. When I think back on the film, I fondly recall the warmth of unexpected kindnesses, Manu’s love for his troubled wife, or a momentarily transporting scene in which, during all of this duress, everybody sings along with Van Morrison on the car radio. One emerges from the film with a battered, hard-won sense of optimism. It’s an unlikely vision of hope.