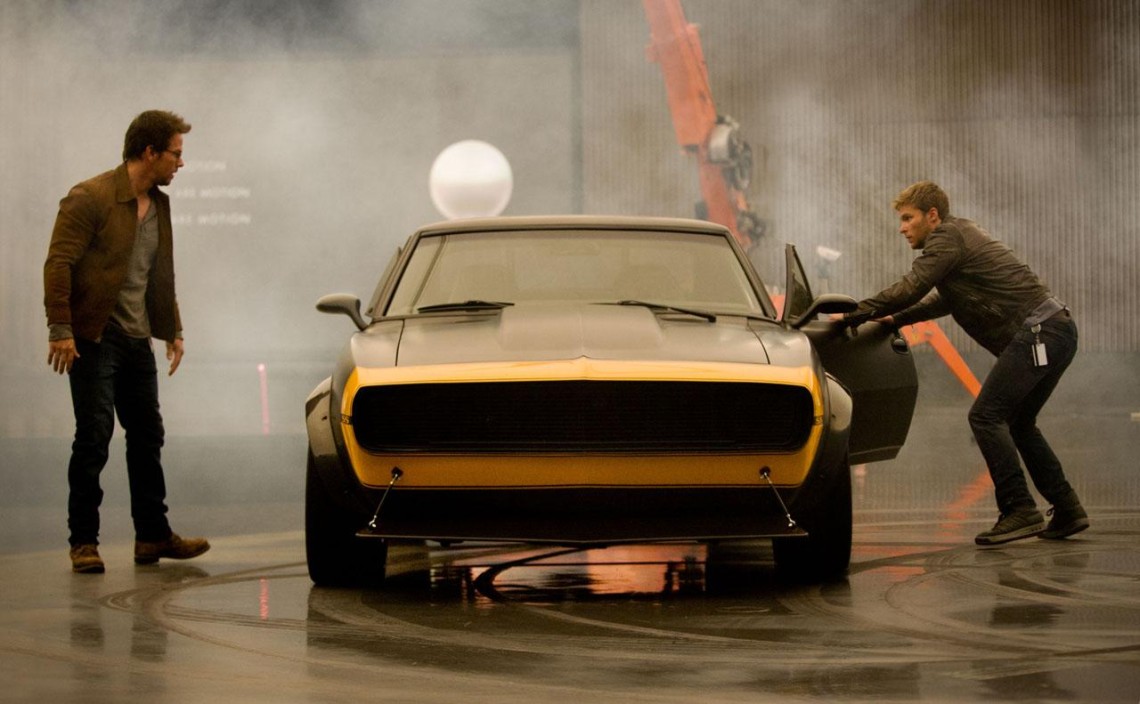 “Transformers: Age of Extinction” Represents The Antithesis of Fun

The tired-looking radio DJ looks at the equally tired audience, going through the motions of asking trivia questions so the people who’ve waited in line for hours to watch a movie about robots beating the tar out of each other and anything nearby can win a prize pack full of stickers that no one really wants. “OK, so, in the new Transformers, what are the names of Mark Wahlberg’s two co-stars?” The answers run the gamut: “Megatron and Optimus Prime!” “Kelsey Grammer and Stanley Tucci!” “The one who replaced Megan Fox…and her boyfriend, I guess.” All of these answers are incorrect, and they are all correct. Optimus Prime and a Megatron-esque baddie loom large in Transformers: Age of Extinction, as do Kelsey Grammer and Stanley Tucci. And then there are Nicola Peltz and Jack Reyner, AKA the one who replaced Megan Fox…and her boyfriend, “I guess.” No one in this crowd really cared too much about the question or the answer or the prize pack, which is fitting, because Transformers: Age of Extinction is a movie made by people who care equally as little.

Wahlberg plays Cade Yeager (Cade, by the way, only becomes a first name not worth scoffing at if we choose to let it pass, and we shouldn’t), a down-on-his-luck inventor living near Paris, Texas, and…now, now, don’t laugh too hard. Yes, Wahlberg is playing a real inventor here, someone whose various robotic creations look roughly as chintzy as the audio-animatronics that lined Disneyland and Walt Disney World in the late 1980s. Cade, in spite of his enthusiasm, is clearly not a very good inventor; as this character, Mark Wahlberg makes Mark Wahlberg in The Happening look like something of a Rhodes scholar. He and his winsome daughter (Peltz) wind up entangled in an interstellar battle when Cade stumbles on Optimus Prime, who’s in hiding as a shady black-ops group led by Frasier Crane and his attack dog (Titus Welliver, who was far more evil in brief moments on Lost as The Man in Black) take down any and all Transformers in hopes of harnessing the technology to create them on Earth. Of course, this idea backfires on them, as Autobots and a series of nasty human-made Transformers do battle in Chicago and China and everywhere in between.

It’s been just over a year since Michael Bay directed Pain and Gain, which was a decent enough if sloppy satire, but with the fourth Transformers, he’s sliding back into his old routine. The one thing that’s lacking from this film, thankfully, is outlandish and frequently racist attempts at humor. (TJ Miller and Thomas Lennon have brief appearances here, but the comic relief is much lower in general.) But everything else he’s known for, like excessively noisy, lengthy, misbegotten, and incomprehensible action sequences, is present in this film. Transformers: Age of Extinction is that rare beast in cinema: a movie that’s so drawn-out, so long, so unnecessary, and so obnoxious, that it becomes physically exhausting to make it to the closing credits. Those who make it out of this film should get a commendation. The major problem, specifically, is that this film is 165 minutes, and very few of those minutes are essential. The basic plot could be dealt with in a handful of minutes; the rest is just interminable visual and aural chaos.

If there is a contender for the worst moment in Transformers: Age of Extinction, it comes right before the closing credits when the script all but ends with a character saying, “Get ready for Transformers 5, everyone!” Watching robots destroy each other should be fun, especially when some of those robots ride dinosaur robots. It should be enjoyable to watch Stanley Tucci get loud and flamboyant, or to watch Kelsey Grammer sneer evilly (even if the enjoyment of the latter is ironic). Hell, watching Mark Wahlberg do a riff on Bruce Willis’ overly protective dad in Armageddon could be good in the right film. But Transformers: Age of Extinction is the very opposite, full of bland character types, mixed political metaphors (the Transformers are illegal aliens and terrorists and drones, oh my!), and truly mind-numbing action. It’s almost impressive how Michael Bay figured out how to make robots fighting each other the antithesis of fun.