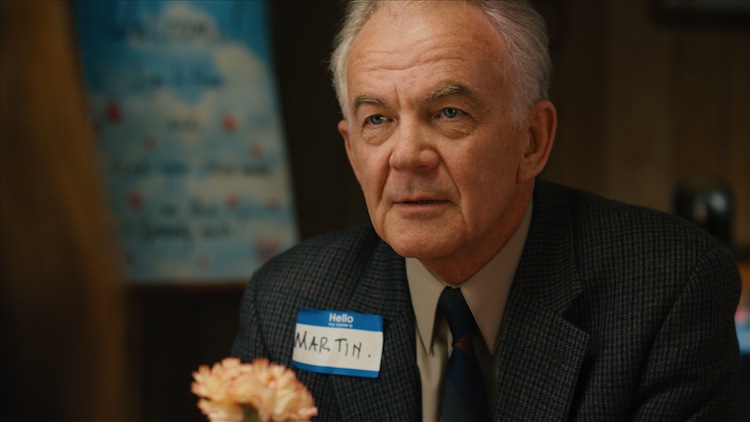 ‘This Is Martin Bonner’

Chad Hartigan sets up the title card for his sophomore feature, This Is Martin Bonner, with small but revealing glimpses into the character’s life. We meet Martin (Paul Eenhoorn) in a Nevada prison, attempting to sell an inmate on a Christian-themed rehabilitation program for whom he acts as a business manager. But the roles of authority and confinement are quickly reversed, with the pragmatic, quick-witted prisoner calling out the nervousness and discomfort in Martin’s face, correctly guessing he is new to the job. When Martin later has to read his address off a Post-It Note, it is clear that he is new to just about everything around him, having relocated to Reno without his family to find work.

Eenhoorn’s Australian accent instantly marks Martin apart from his surroundings, but his sense of displacement is far more specific and intimate than a national separation. (Further shrinking that geographic distance, the life he leaves behind is one on the East Coast, not Perth.) Martin’s modestly furnished apartment is filled with dead space, but medium-long shots of him relaxing and cooking emphasize how cramped his new digs really are. The camera generally remains static, with only the occasional, delicate pan to break up its long takes and shot/reverse shot patterns. It’s an old-school form of filmmaking that befits the film’s middle-aged protagonist while also making a clear distinction between itself and the jittery, youth-oriented style of most indie cinema. But it also emphasizes the quiet bewilderment of a man who, though he never makes a fuss about it, clearly did not expect so vast a change in his life at his age.

Hartigan soon pairs Martin with a polite and penitent but emotionally stunted ex-con named Travis (Richmond Arquette), whose own situation begins to reveal strong parallels to Martin’s life. Both men come from other places; as Travis says, “I’ve never been to Reno, but I’ve lived here for 12 years.” They have rocky relationships with their children, Martin with a daughter who is affectionate but almost mothering and a son who never calls, Travis with a daughter, Diana (Sam Buchanan), whose formative years he missed.

Hartigan occasionally uses the comparison to check Martin’s muted despair: the first shot of Martin’s apartment, on a small table, looks as if the camera is in a hotel room until it pans over and takes in the whole unit. But Travis actually does find himself living in a motel, so cramped the camera can cover the interior without moving. Only when Travis stands outside the motel can the camera pivot, leading to a 360-degree shot that situates the man in the drab edges of the town, with a blaring stretch of highway surrounded by cheap inns, an industrial park of giant silos and, only in one sliver of the panorama, ritzy hotel/casinos in the distance. But Travis too learns he is not so distinct in his suffering; the ex-con struggles to find work after being released, but Martin confides in him that his theological studies and lifetime in the church have made finding a job outside religious organizations impossible, and that his current position is his first job in three years.

The film’s handling of these constant checks to both men’s self-regard is never simply a critique of the inherent myopia of loneliness but a means of building empathy. Both Eenhoorn and Arquette fill their deliveries with pauses and slight second-guesses, but from this hesitation, frankness follows, the initial reluctance to open up quickly supplanted by the relief in finding someone else unsure of their place in the world. Even Hartigan’s direction develops this sense of unity, matching scripted parallels between the characters with recurring shot setups that provide a joined sense of perspective. Even so, the static, observant style that marks their mature but confounded view also makes for shots that provide next to no respite, as in a scene that reunites Travis and Diana in unbearably long two shots that only feel more uncomfortable when they are separated in isolating medium close-ups. Diana brings her own hangups and feelings to the film, and the long takes between estranged father and daughter serve as a reminder that exposure to others can be as harrowing as it is therapeutic.

There are so many ways This Is Martin Bonner could have gone wrong. Hartigan’s focus on characters a generation removed from him could have resulted in overly courteous and respectful or condescending treatments. The carefully interwoven lines of Martin’s and Travis’ mirroring lives could have been a means to their own end, a Guillermo Navarro-esque feat of self-satisfying tidiness. Its vision of loneliness could simply have wallowed in the misery of abandonment at an older age. But from the moment Hartigan cuts from Martin sitting in on an antiques auction to the man trying to flip a lamp he acquires on eBay, nothing is predictable about this film, and to see the writer-director consciously (but never self-consciously) ducking the many traps he laid for himself provides more of a thrill than any blockbuster to be released this year.

This Is Martin Bonner is one of those titles that is both basic and ambitious, a blunt statement of fact that also throws down a gauntlet to the filmmaker to truly define his chosen character. The depths Hartigan and Eenhoorn draw from naturalistic interactions surely live up to the title’s thinly hidden intent to truly define Martin, but that title is also misleading. To see who Martin Bonner is, we must also learn who Travis Holloway is, and Diana Holloway, and Martin’s unseen daughter and wholly absent son. A deeply human work, This Is Martin Bonner fundamentally understands that to accurately impart an idea of its singular subject requires equally rich characterization of the others against whom that person is defined.