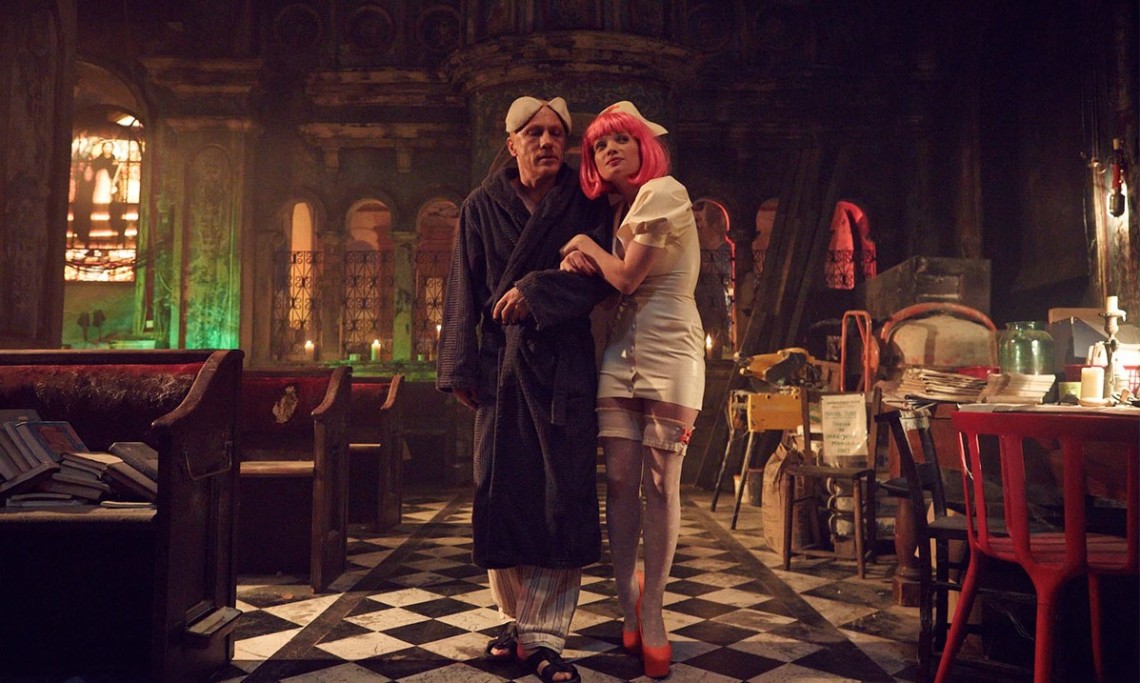 “The Zero Theorem” Waltzes Through Disconnection

The Zero Theorem‘s first 20 minutes or so are an endurance test. If you can withstand the film’s introductory sensory assault, then you can reasonably withstand the rest of it. But the ride remains jarring even when the edges smooth on Terry Gilliam’s latest tale of wacky, low-tech future shock. Entire scenes go by without a word of explanation given to contextualize his hyper-colorful, thoroughly grimy reflection of our web-crazed modern society; by the time Christoph Waltz and David Thewlis discuss “crunching entities” for the umpteenth time, you may feel like you’re in over your head.

But that’s just Terry being Terry. Monty Python’s token Yank has always preferred to unleash his cinema in torrents; hand-holding isn’t really his style. A typical Gilliam movie will airdrop its audience smack dab in the middle of a world that feels familiar beneath the surface, but with a metric ton of surface to drill through. This is as true of The Zero Theorem as Brazil, or 12 Monkeys, or The Imaginarium of Doctor Parnassus, perhaps more so. After the film’s striking, lilting opening image, it kicks into high gear with an unrelenting buildup of inexplicable oddity: Christoph Waltz codes naked at his home computer, answering his ringing phone with excitement that dissolves into disappointment. City streets are veritably haunted by blaring ads that actively harangue passerby. It’s loud, it’s abrasive, it’s discomfiting, and it’s all too much.

Which is what makes it so damn great. If you’ve never watched Gilliam’s work before, The Zero Theorem is probably a poor starting place, but for the initiated, it’s a gem. All of his usual hallmarks are present – his attention to detail, his gift for deploying narrative through design, his dystopian anxieties, his sad-sack characters, his belief in the power of  imagination – and he overlays them with a heightened level of hand-wringing cynicism. It’s his stubborn refusal to act as tour guide that makes the film a decidedly tougher nut to crack. Even Brazil offers the courtesy of easing us into its cinematic space. Meanwhile, The Zero Theorem brusquely shoves us down a flight of stairs instead.

In other words, the film is an acquired taste, like most of Gilliam’s output. If you’ve got the right palette, it’s an ambitious delight. The Zero Theorem takes place in a far-flung hereafter where eccentric programming guru Qohen Leth (Waltz) struggles with existential ennui and workplace frustrations; he’s waiting for a call that never comes, and which he believes will tell him the meaning of life. By happy coincidence, the company he works for, Mancom, has an initiative in place – the cryptic mathematical quandary of the title – to solve the exact same conundrum. It’s almost like fate!

So Qohen shoulders the burden of reconciling the equation. Along the way, he’s aided by Bainsley (Mélanie Thierry), a sexually enlightened party girl-cum-philosopher, and Bob (Lucas Hedges), a 15-year old boy genius who happens to be the son of Mancom’s big cheese, the enigmatic Management (Matt Damon, discarding his common man persona to play the shadowy avatar of bureaucratic villainy). The film flits between Mancom’s chintzy, industrial offices; Qohen’s decrepit, burnt-out abode; and a virtual reality simulator of Bainsley’s design, where Thierry and Waltz enjoy a couple of naughty but brief escapades before Gilliam tightens the noose; there’s quirk aplenty here, often seen in his dazzling brand of world-building, but The Zero Theorem‘s prevailing tone is tragic. You can see the unhappy ending a mile away. 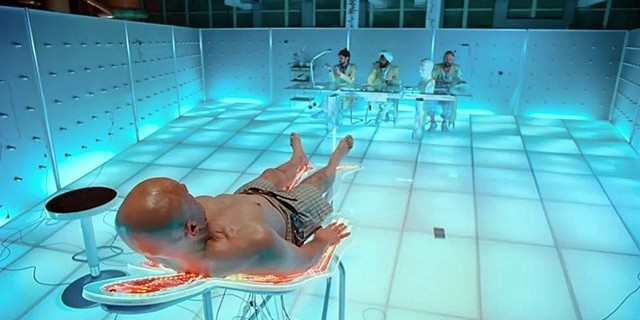 Just take care not to let the rest of Gilliam’s nightmarish vision of Internet culture run amok overwhelm you. The film is very much a broad critique of our current obsession with online realms, be they Facebook or World of Warcraft; like 2013’s Her, it suggests that the more people connect with one another through software, the less connected they actually are. The coda provides the ultimate punctuation point to Gilliam’s commentary, but he leaves clarity in the margins and forces the audience to wade through his abstractions. And that’s okay – even if you don’t “get” what’s going on here, you’ll comprehend it. If The Zero Theorem is aggressively weird, it’s no less coherent.

It’s also deeply, intrinsically sad. What is life without meaningful human contact? If there’s no point to existence, does that necessarily mean our existence is pointless? The film may strike introspective moviegoers with a serious case of the heebie-jeebies, all while offering little solace in exchange. Maybe that’s Gilliam’s most significant trademark: his knack for layering zaniness with despondency. It’s a neat trick that lends The Zero Theorem a veneer of frivolity, all the way up until its gut-punch of a finale. The journey Gilliam takes us on is worthier than the destination, but let’s hope he’s merely musing over the direction we’re heading in rather than predicting it.