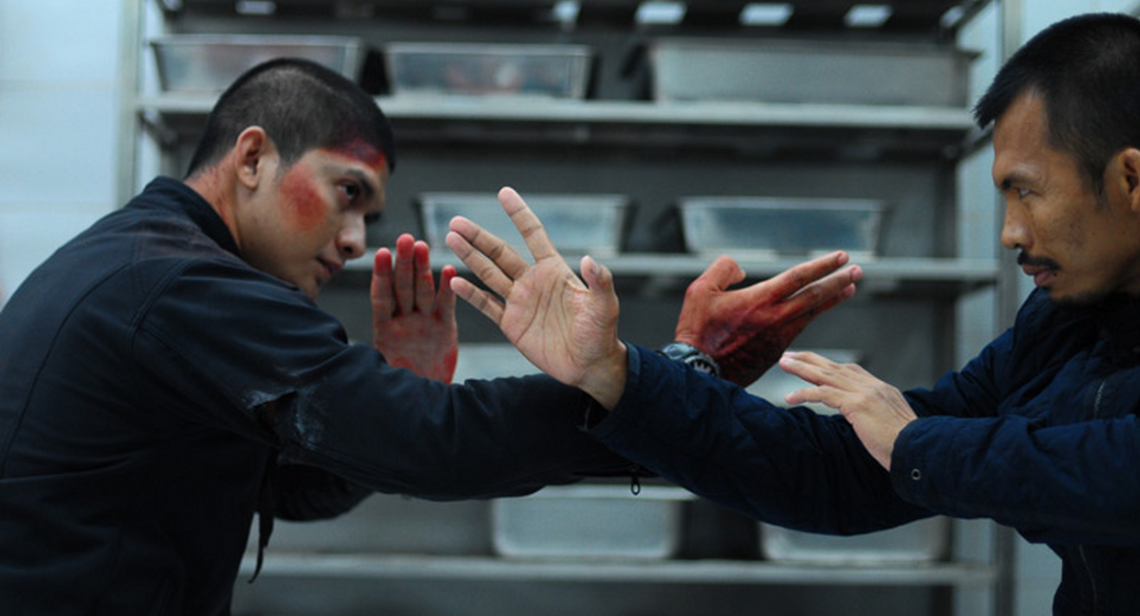 “The Raid 2: Berandal”: Character Through Action, Action Through Drama

Self-congratulatory types may observe The Raid 2: Berandal in terms of its smorgasbord of cinematic influences, and pat themselves on the back for catching its touchstones: the A Better Tomorrow and Infernal Affairs trilogies, the filmography of Johnnie To, The Godfather: Part II, maybe even a little The Untouchables. Frankly, those engaged in that kind of navel-gazing can’t see the blood-soaked forest for the viscera-spattered trees, because the most significant voice in that prestigious cavalcade belongs to Welsh filmmaking dynamo Gareth Evans. His new film, a sequel to 2012’s The Raid: Redemption, deserves mention alongside those titles, and not in deference to them.

Picking up where the previous entry in Evans’ unexpectedly burgeoning franchise left off, The Raid 2: Berandal sticks with the essentials of what made The Raid: Redemption work so well while also inflating its basic blueprint. Those anticipating the same sort of no-frills set-up, complimented by precise, bravura fight sequences peppered with bursts of unapologetic, amoral brutality may find themselves either elated or disappointed; Evans has jettisoned the bare bones approach here in favor of far grander storytelling, complimenting his expanded plot with almost twenty action sequences interwoven along the crewel of his overarching narrative.

We’re back in Jakarta once more, where Rama (Iko Uwais) has been intercepted by a small, elite squad of hard-nosed cops led by the seemingly benign Bunawar (Cok Simbara). Bunawar’s ardently anti-corruption, so much so that he guns down the survivng treacherous cop on the take from the first picture without hesitation within The Raid 2: Berandal‘s opening ten minutes, and immediately after recruits Rama to his cause: rooting out the bad eggs among the ranks of Jakarta’s finest. For Rama, that means going deep undercover by getting arrested, so as to infiltrate the city’s most notorious and dangerous gang outfit, identify the crooked officers on their payroll, and bring them to justice.

Justice, of course, becomes kind of a distant dream once Rama enters the seedy underworld where local kingpin Bangun (Tio Pakusadewo) reigns through a steady but fragile truce with the Goto family, an interloping clan of Yakuza. It’s a fiefdom defined by distrust, paranoia, and ambitions both realized and broken. Everything Rama (who adopts the pseudonym Yuda as a means of protecting himself and his family from reprisal) witnessed in The Raid: Redemption amounts to child’s play next to the unbridled barbarities carried out in the sequel, all in the name of maintaining – or, as eventually becomes the case, destroying – a criminal empire. Turns out that the cost of business is occasional havoc.

Responsibility for the mayhem falls squarely on the shoulders of a select few transgressors; Bangun prefers avoiding bloodshed when able, but his son and heir, the unstable Uco (Arifin Putra), would rather go about his shady dealings from the trigger handle of a shotgun. Meanwhile, outsider Bejo (Alex Abbad), a self-made type, believes in the Petyr Baelish school of getting ahead, treating everybody not on his side (and even those who are) as pieces on a chessboard. Rama is beset on all sides by each of these parties, bent on uncovering law enforcement on the take but ever more discombobulated as the lines between his ideals, his vocation, and his mob foster family blur further and further. 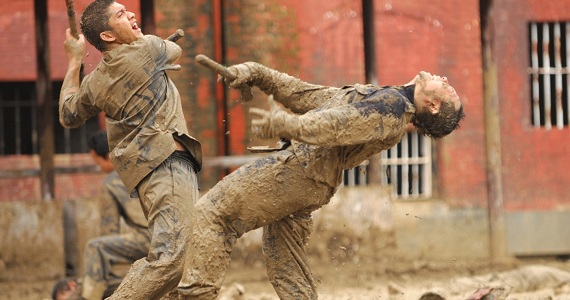 Evans, in other words, approaches the world he depicts in The Raid 2: Berandal as a powder keg. Fight scenes occur in fits and spurts as he lays the groundwork for the film’s absolutely unhinged third act, which exists as a nearly never-ending stream of betrayals, operatic reversals, staccato gunfire, and jaw-dropping hand to hand carnage. Unlike The Raid: Redemption, which doesn’t hold back at any point in its running time, Evans is building to a very real crescendo here, topping himself with each sequence until he arrives at the piece de resistance that is Berandal‘s climax. Action fans will be satisfied; those who aren’t dedicated patrons of the genre will be, too.

That’s because Evans has a genuine story to tell, and a legitimate sense of craft. The Raid 2: Berandal defies the expectations imposed on it by category, boasting impressive artistry in tandem meticulously planned action. Long, unbroken takes are just one of the many tools in Evans’ arsenal, each of which he uses to precise effect to draw out anticipation, heighten suspense, and build his characters with economic efficacy. In the end, there’s as much of a thrill in the sight of returning The Raid: Redemption alum Yayan “Mad Dog” Ruhian dispatching a bar full of hoodlums (or in the film’s highly-touted car chase, which is every bit as mind-blowing as early hype suggests, if not more) as there is in watching the heavies and the heroes encircle each other like lions stalking prey.

Common wisdom suggests that action cinema needs nothing more than a handful of well-staged fracases to have merit. To a limited extent, that’s true. Even films like Ong Bak enjoy popularity and success despite the fact that they’re mostly atrocious when they’re not about people punching each other. But with The Raid 2: Berandal, Evans proves that it’s what resides in the margins of fight scenes – characters with pathos, a cohesive, compelling story, and all the tenets of drama – that makes an action movie truly iconic, and maybe even meaningful.

Three features into his career, Evans has already demonstrated his trenchant knack for manifesting images that endure in his audiences’ minds long after they’ve left the theater, but equally important to his vision is his deft hand at the fundamentals of filmmaking and narrative. The Raid 2: Berandal isn’t simply great action. It’s great art.

6 thoughts on ““The Raid 2: Berandal”: Character Through Action, Action Through Drama”