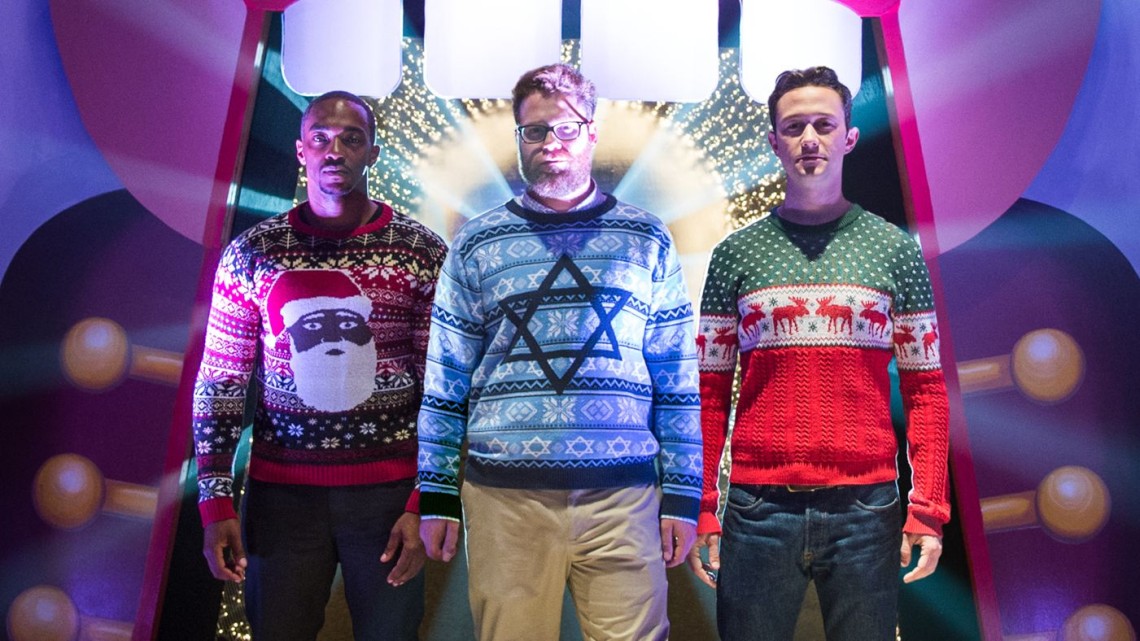 Seth Rogen, our generation’s pothead Peter Pan, is afraid to grow up again. Ever since his spot-on screenplay for Superbad (co-scripted with regular writing partner Evan Goldberg), Rogen has mined comedic gold from coming-of-age anxieties, whether high school graduation or impending parenthood — the passing of personal milestones are occasion for existential dread. And lots of drugs.

Nowhere near as focused or incisive as last year’s Neighbors, director Jonathan Levine’s The Night Before is a ramshackle romp through the Rogen formula co-starring Joseph Gordon-Levitt and Anthony Mackie. The somewhat convoluted backstory (narrated in rhyme by Tracy Morgan) explains that ever since JGL’s parents were killed in a car wreck on Christmas Eve, these three lifelong friends have spent the holiday out on the town getting plastered together, longing to attend a secret, invitation-only bacchanal known as The Nutcracker Ball.

After a dozen or so years of this, it’s kinda time to move on. Rogen’s a successful lawyer with an extremely pregnant wife (Jillian Bell) and Mackie is an NFL star mysteriously having the season of his life at age 34. The orphaned Gordon-Levitt, however, remains adrift. Underachieving at go-nowhere jobs and blowing it with his girlfriend (Lizzy Caplan), he seems to only live for these yuletide benders with his increasingly distant bros.

Having decided that this will be their final night on the town before embracing adulthood, the boys head out for some wild and crazy adventures that are never quite as wild and crazy as Levine’s antic direction seems to think they are. Stylistically, the movie attempts to ape the screeching nocturnal momentum of Scrooged but the screenplay (credited to Levine, Goldberg, Kyle Hunter and Ariel Shaffir) feels like a rough draft. It’s a lot of half-baked conceits that don’t really fit together, but I’d be lying if I said I didn’t laugh.

Naturally, the funniest bits involve Rogen and drugs. Decked out in a glorious Star of David sweater, the straight-laced Dad-to-be devolves into a paranoid party monster, tripping on shrooms, hoovering blow until his nose bleeds and having nightmare hallucinations of his unborn daughter all grown up and working at a strip club. These are extremely familiar riffs for Rogen, but he happens to still be really good at them. My personal favorite running gag involves him accidentally switching phones with an office pal (Mindy Kaling) and receiving an array of gargantuan dick pics from a suitor of hers named James. I’m terribly embarrassed to admit I didn’t see the glaringly obvious punch-line coming a mile away, but the roundabout route it takes getting there is still delightful.

Less involving are Mackie’s strange steroid subplot and Gordon-Levitt’s attempts to woo back Caplan, both of which seem to take place in different, more grounded universes than the rest of the picture. The Night Before‘s scattershot but at times very real charms are perhaps best exemplified up by a brilliant performance by Michael Shannon as Mr. Green, the boys’ high school pot dealer.

Hovering on the sidelines of scenes, halfway between deadpan and dramatic, Shannon’s work is so wonderfully strange that during his brief appearances he flips the entire movie over onto his own unique time signature. (The towering, terrifying figure seems so jarringly out of place in a picture like this that none of the other actors seem sure of how to respond to him either.) At first just a weirdo, Mr. Green gains pathos and ultimately becomes something of a tragic hero, in ways that in all honestly don’t really make any sense. But by then The Night Before is just flinging stuff at the wall to see what sticks. Mr. Green sticks.