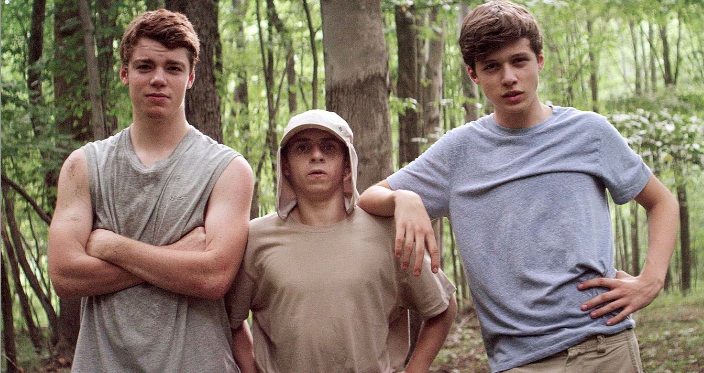 ‘The Kings of Summer’

Usually, describing something as “adolescent” is a put-down. Not so in the case of The Kings of Summer. The movie accomplishes the uncommon feat of capturing what it’s like to be a teenager, while at the same time casting a critical eye on how teenagers can be, well, terrible. It also pulls off the even rarer feat of indulging nostalgia for youth without sugarcoating the pain that comes along with the fun. More to the point, though, The Kings of Summer is very, very funny.

Nick Robinson and Gabriel Basso play Joe and Patrick, 15-year-olds seething beneath the strictures of their parents. Joe’s single dad Frank (Nick Offerman, in a typically muscular performance) is a coarse authoritarian, while Patrick’s parents (Megan Mullally and Marc Evan Jackson) are almost aggressively chipper as they smother him with affection. As summer sets in, the pair decides to liberate themselves the old-fashioned way: by running away to live in the wilderness. But they do it with a bit more style than the typical kid – with the help of strange loner Biaggio (Moises Arias), they build an honest-to-god house in a clearing in the woods. Their own lords and masters, the trio lives it up while their parents launch a search for them.

Kids today (a phrase I use despite not really being too far from a kid myself) have been distanced from true adventure by technology. Why tromp into the forest when you can just play Zelda? Bizarrely, the scenario of Stand By Me might be more plausible than this film’s. The movie semi-acknowledges the unlikelihood by making itself partially about a desire to get back to nature. Joe, resenting his father’s boundaries, wants to be his own man, and sees building a house and living independently as the means to that end. And it’s the friction between that masculine ideal and the realities involved in actually living it out that provides both the biggest laughs and the most heart in the movie. Hunting, it turns out, is more difficult than any of the boys think.

Of course, the house in the woods also represents the last gasp of childhood. It’s a silly fantasy brought to life, only to slowly collapse under encroaching adulthood. Part of Joe’s goal in being a manly man is to woo his crush, Kelly (Erin Moriarty), but bringing outsiders into the group turns out to be its undoing. Petty jealousies shove their way into Joe and Patrick’s friendship, and nothing can be the same. It’s a relief, though, that the movie doesn’t paint Kelly as the spoilsport female interloper. The conflict over her comes wholly from Joe and Patrick’s personalities, while she actively resists being the heartbreak girl.

The movie wouldn’t work if any of the three central actors were miscast, but Robinson, Basso, and Arias have fantastic chemistry. Robinson and Basso feel like old best friends, both in how they banter and how they fight. Robinson has a tricky role – Joe is kind of a dick, the cause of all his own problems, but he remains sympathetic. Arias, though, is something else. He’s working a worn indie movie trope, the weird dude who says random things, but he makes it work almost entirely by sheer force of will. Biaggio is a live-action Ralph Wiggum, and Arias, with his unnerving, alien-like stare, sells every non sequitur (“I met a dog who taught me how to die”). The triad’s relationship isn’t quite trying to be realistic, operating on a heightened sense of emotion, but it works.

The cast as a whole is split between real-feeling characters and cartoons. Mullally and Jackson are flat. Moriarty is more rounded, which is impressive considering her relatively brief screen time. Alison Brie as Joe’s older sister is convincing, mainly because she acts as the lone voice of sanity. Frank oscillates – at some points, Offerman is just rehashing his role as Ron Swanson from Parks and Recreation, while at others, he makes the viewer empathize with the pain of a widower who can’t relate to his son. Most of the supporting cast, though, consists of people doing schticks.

The movie itself, in fact, is rather heightened. For example, how the three kids acquire the needed materials for a small house, and then manage to build it on their own in something like a week, is an element of the movie that’s glossed over. More than that, though, is how director Jordan Vogt-Roberts and editor Terel Gibson allow an improv sensibility to overtake many scenes. It makes sense, what with Offerman and his comedy ilk onboard, and sometimes it works. Other times, though, it just makes the proceedings drag.

There are actually a lot of different sensibilities flying about in the movie. Sometimes it turns into a music video. Sometimes it’s a teen sex comedy. Sometimes it’s almost Malick-esque. It’s incredibly messy, but in a way that feels suited to the spirit of this freewheeling story.

The Kings of Summer is a great surprise. It has future cult status written all over it, and the film certainly deserves it. If you were lucky enough to grow up near the woods, you’ll see how true the movie is to the tenor of adolescent exploration. This is a kid’s film in the best sense of the word, not a movie for kids, but a great story about being a kid.