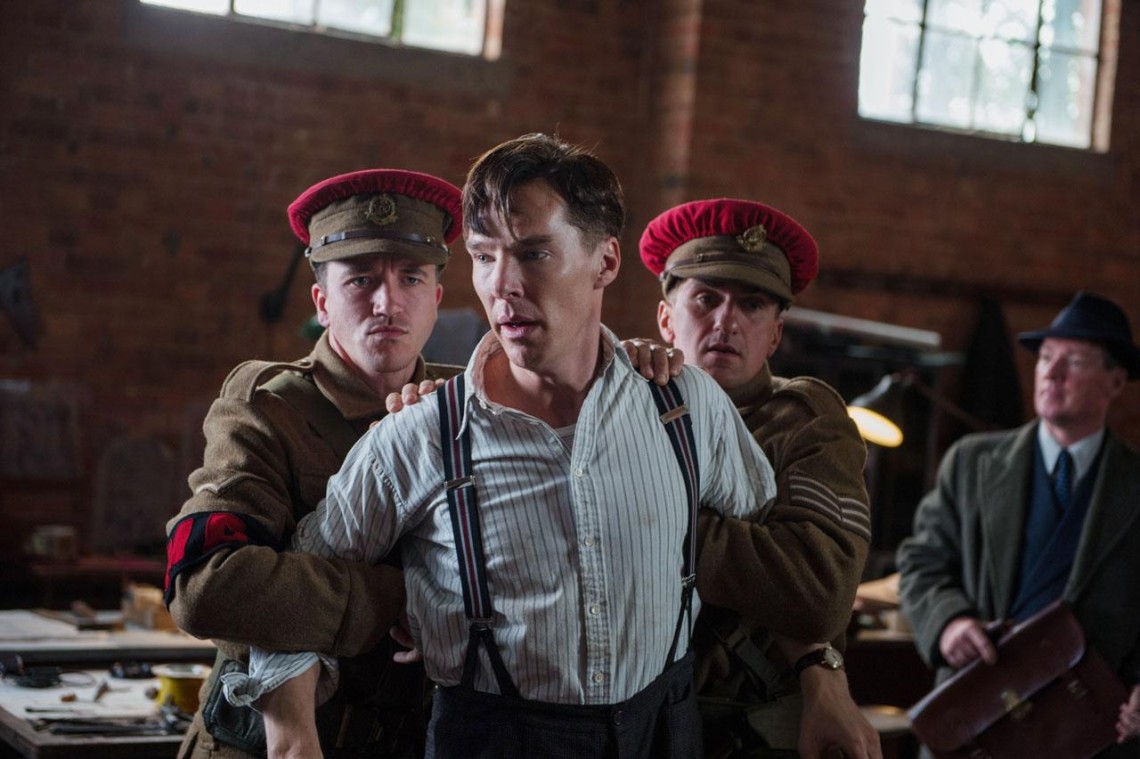 Those who’ve had it with biopics –especially of geniuses or otherwise historically distinguished male figures- can rest easy, as The Imitation Game turns the tiring elements of a lately overdone formula into a highly engrossing and entertaining achievement. At a time when it’s tempting to write off the genre entirely (if it can be called one), when the comparably slight and conventional The Theory of Everything (on another British genius, Stephen Hawking) is also meeting audiences worldwide, The Imitation Game excels at some good, old-school, polished storytelling –a somewhat undervalued cinematic virtuosity nowadays. And to no one’s surprise, it features one of this year’s most astonishing lead performances, from Benedict Cumberbatch, who accentuates Turing’s humanity so profoundly that even the at-times overwrought “odd genius” staples of his character never become overbearing (Alexandre Desplat’s unassuming, non-bombastic score certainly helps). A Beautiful Mind, this film thankfully isn’t. Don’t let anyone tell you otherwise.

Early on, Turing gets arrested for “gross indecency,” is summoned to the police station for questioning, and tells his story to the police officer (Rory Kinnear) who takes interest in the bizarre nature of nonexistent documentation under Turing’s name. And there you have one of three narratives through which The Imitation Game meticulously builds the story of Alan Turing: of how he led a team of brilliant minds in breaking Nazi Germany’s unbreakable Enigma code and according to some experts, helped shorten World War II by at least 2 years, only to later on get convicted by the British government on accounts of his homosexuality, and to evilly and inhumanly put on a hormonal therapy “as a cure,” which eventually led to his devastating suicide.

Yet the core plotline is set during World War II, following his recruitment by the government to help break the Enigma code in the Bletchley Park work base. Miraculously managing to secure funds from the government (having arrogantly written a letter directly to Winston Churchill), Turing sifts through an existing group of recruits and builds a team to include the brilliant cryptanalyst Joan Clarke, played by a gracefully convincing Keira Knightley in a substantial performance, continuing to deliver upon a ever-growing and rich career. Despite initial resistance from his male teammates, Turing persists on building a machine he names “Christopher,” after his secret first love in elementary school, the story of which we learn through flashbacks that make the film’s third narrative line. The machine is designed to break the code of Enigma, which Germans change daily at midnight, thus making a day’s uncompleted work utterly useless. According to the team’s calculations, the possible number of Enigma settings could add up to 20 million, which they would have to go through in 20 minutes; thus, Turing’s machine becomes their only option and despite not getting along with him (to their defense, the often humorless, obnoxious Turing doesn’t offer them many reasons to like him), they end up defending him and his machine against their superior Commander Denniston (Charles Dance), who wants to shut down the funding for their work. It’s tempting to understand Turing’s vision in its entirety, though naturally it’s an impossible task. To the film’s credit, the script does a good job of explaining “Christopher’s” main principle without talking up or down to the audience. The task remains engaging, and you might briefly fool yourself into thinking you basically understand what Turing’s machine (a basis for the modern computer) was all about.

Certain fictional liberties with her character might have been taken for dramatic effect, yet it’s worth opening a window to talk in some length about The Imitation Game’s Joan Clarke. She was not only Turing’s good friend and confidant, but briefly his fiancée, until Turing decided to not go through with the marriage and came out with his sexual identity. Joan affixes a vast dimension to the story. When she first appears to take the exam Turing designs to discover the most brilliant of minds, the males are quick to assume she is a secretary who stepped into the wrong room and try to reroute her. Even after being selected for the mission, she faces resistance from her parents and succeeds in following Turing to Bletchley Park under a cover role that is “more suited” for a woman her age and upbringing. Steering her way around gender norms and blatant sexism, Joan Clarke doesn’t only become a character merely defined by Turing, as she has her own genius to stand by.

The film inevitably has taken some heat by those who criticized it for its lack of adequate focus in Turing’s identity as a gay man. After all, the country he served killed him in the end because it rejected and condemned his homosexuality. So why not put more emphasis on his identity, and be more brave, the critics suggest. While it’s certainly an understandable stand against the film, it’s not one that’s completely relevant within the context of the story told in The Imitation Game. If anything, there is something inherently refreshing about not defining a gay man primarily by his sexual orientation, but by his work and unparalleled contributions to history. Here, Alan Turing is a mathematician, a code-breaker, and a war hero, who also happens to be gay. The film in no way tries to whitewash his identity and instead, ensures you feel that sharp pain for a remarkable life, cut way too short. That pain, rest assured, will follow you around and leave a lasting mark, knowing gay rights might have come a long way, but there is still a million miles to travel, especially seeing that the Queen has only apologized for England’s treatment of Turing in 2013. As the film’s characters suggest, this war is perhaps over, but there might be others to come.

One thought on ““The Imitation Game””