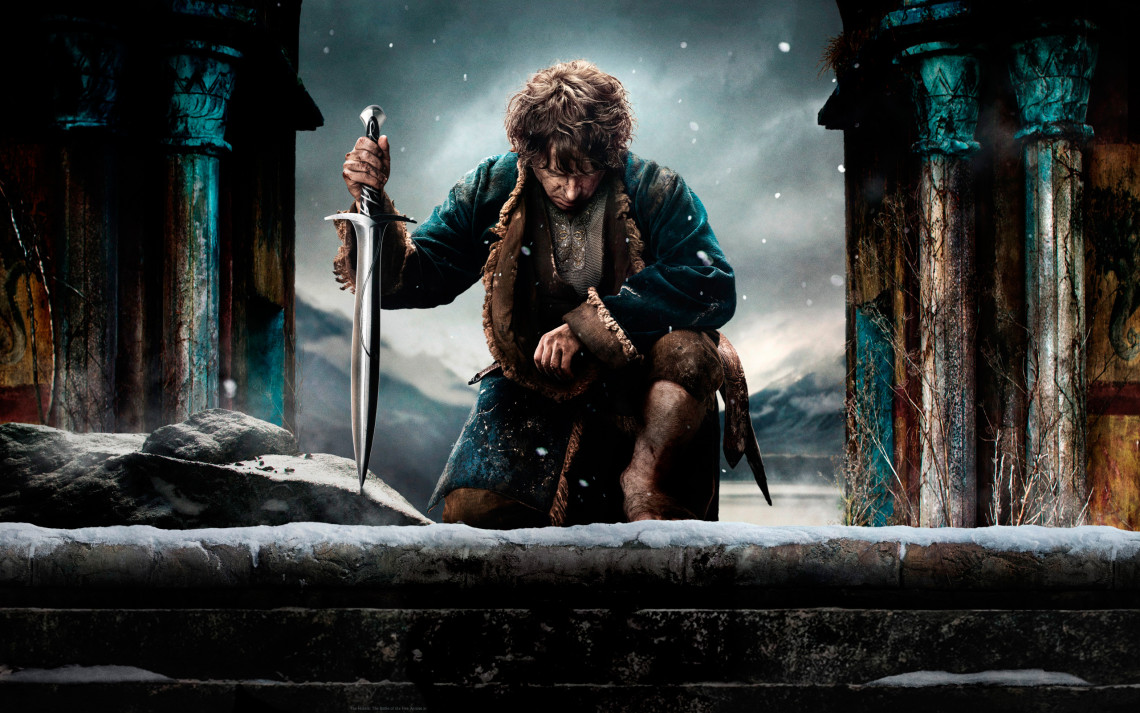 “The Hobbit: The Battle of the Five Armies”

Do you remember that pulse of excitement you felt when New Line and Warner Bros. first announced that they’d be adapting The Hobbit into a movie, a la The Lord of the Rings? Do you recall your anticipation as the project went, year by year, from being an idea to taking one step closer toward becoming a real film?

No? Good, because I don’t either. There was a time when I welcomed the idea of visiting J.R.R. Tolkien’s fantasy realm on the big screen. That was before Peter Jackson took over for Guillermo del Toro as director, and before the production split into a bloated three-picture monstrosity, and before last year’s The Hobbit: The Desolation of Smaug made me feel stupid for trusting that Jackson would do the material justice. Mercifully, we’re at the end of The Hobbit’s tenure in multiplexes with The Hobbit: The Battle of the Five Armies, and now we can all go back to enjoying winter without hearing from Hollywood’s literary adaptation chop shop.

The Hobbit: The Battle of the Five Armies is not that much like The Hobbit at all, which can also be said of the films that precede it. In the series’ climactic chapter, we’re wrapping up the nonsense that occurred when last we tuned in: the dragon Smaug’s (Benedict Cumberbatch) impending attack on the waterbound Lake-town, the slow march of the orc-ish armies on the Lonely Mountain, and the ominous threat lurking within the grim facade of Dol Guldur. So we have a dragon to slay (which happens in the first 10 minutes), a dark lord to vanquish (which happens within 10 minutes), and an army to defeat (which comprises most of the remaining 120 minutes). After the rising action of The Desolation of Smaug, The Battle of the Five Armies should be a lot of fun, a cavalcade of falling action captured through the melee of the title. You’ve either read the books or seen the ads, so the idea of men, elves, dwarves, and orcs duking it out sounds like a fine way to kill a couple of hours.

But it isn’t. It isn’t because The Battle of the Five Armies is exactly the same kind of film as The Desolation of Smaug, a fun park ride where the emphasis is more on the ride than the fun. How can armies clashing in open combat be this boring? Jackson made the battles of the Rings films practically sing; he turned them into pivotal moments plot where plot becomes action, clearly laid out their stakes, plunged us into their ebb and flow. Here, we’re basically watching video game cutscenes unfold. Blame that at least in part on Jackson’s unimpeded reliance on CGI, which has sucked the life out of his work in all three Hobbit joints, but the real issue here has to do with personal investment. You can throw all the computerized combatants at us as you like, Peter, but you can’t make us care.

It has taken far too long for this story to be told, and with far too many interruptions to keep us engaged. Two hours pass, and then we must wait a year to find out what happens in the next installment; another two hours, another year, then yet another two hours, and oh, come on, just read The Hobbit instead of waiting for the movies, for Christ’s sake. This isn’t a book that demands fanfare. It’s a children’s story, 300 pages of charming, fish-out-of-water whimsy that’s as unlike Tolkien’s other Middle-earth tomes as it is related to them. In Jackson’s hands, it’s a mess inflated beyond all recognition. Bilbo (Martin Freeman) is scarcely a presence here. The film may as well be called The Emo Dwarf King, for all the time it spends on Thorin’s (Richard Armitage) pouty recalcitrance. He doesn’t want to play ball with the elves, led by Thranduil (Lee Pace), or with the humans, led by Bard (Luke Evans), who both feel they have a claim to part of Smaug’s hoard. But Thorin doesn’t buy it, and the movie tries to paint his contempt for the interlopers with the same brush as Smeagol’s mad devotion to the One Ring.

Like every other change Jackson makes to the source, it doesn’t work in The Hobbit: The Battle of the Five Armies’ favor. More is more here, not less, and the narrative is made worse, not better, for Jackson’s tinkering. The point is to develop the supporting characters and side plots of Tolkien’s original yarn, but if he thought they needed to be developed in The Hobbit, then he would have done so himself, wouldn’t he? Jackson tries to improve on a model that never needed to be improved. All we’re left with once his grand plans go awry is the nostalgic tug to return to the textured, lived-in Middle-earth of 2001 before he got around to bulldozing it.

6 thoughts on ““The Hobbit: The Battle of the Five Armies””