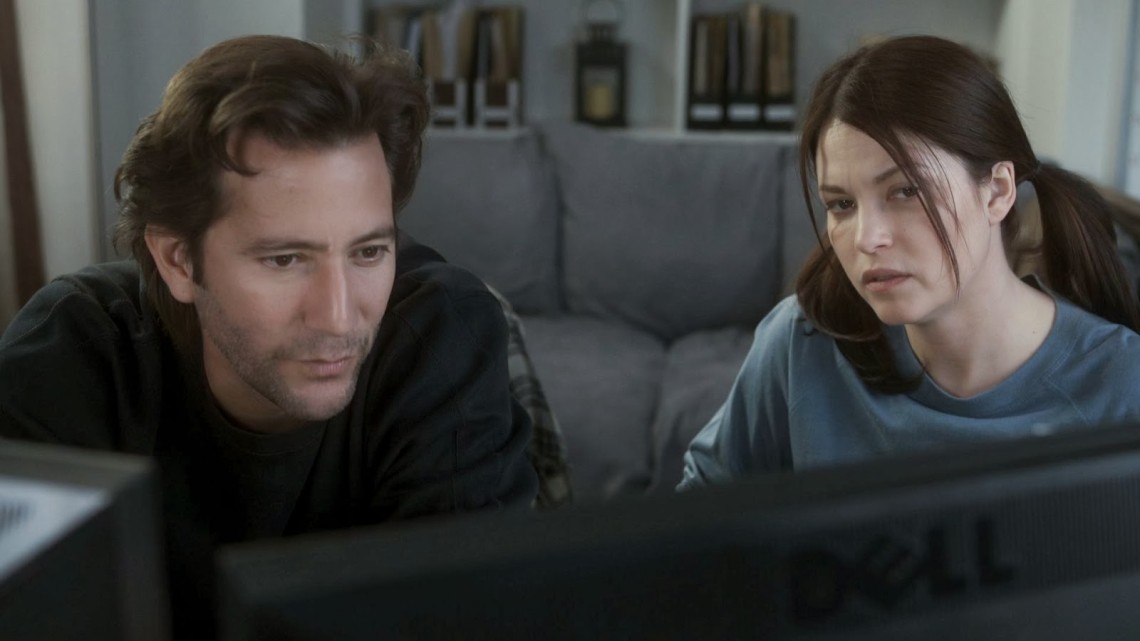 “The Girl on the Train” A Silly and Ultimately Forgettable Thriller

“Didn’t Jesus say, ‘What is truth?” is an odd question for a NYPD detective to ask a potential suspect of a murder, but it’s no odder than the cool-headed reply: “I think it was Pilate.” Debating the essence of moral or objective truth, what it means to film the world instead of experience it, and how life can change based on a moment of action or inaction are topics that might be more appropriate for a college lecture in introductory philosophy. Yet, they’re all up for discussion in the intellectually grandiose and soppy thriller The Girl on the Train, which has a faux-Hitchcockian core that’s gussied up at the edges by silly and arguably pointless conversations about the meaning of the world that inevitably go nowhere.

Henry Ian Cusick (best remembered as Desmond Hume from Lost) plays Danny, a documentary filmmaker in the New York area who, by happenstance, runs into a strikingly beautiful woman (Nicki Aycox) on a train leaving Grand Central Station one day. He engages her in a chat and, in spite of her apparent lack of interest, she gives him her name (Lexi) so he can fruitlessly attempt to track her down. Instead, she finds him the second time and they begin some sort of relationship. But Lexi has a sordid past and Danny is all too willing to help her break free of her equally sordid old friends. Lexi’s a textbook femme fatale, and Danny a textbook hapless fall guy; granted, the script, by director Larry Brand, is all too keen to focus less on the noirish tendencies of this thriller and more on how the story is told at all.

To wit: the film opens with Danny’s in medias res voiceover narration as he’s tied up to a chair in a bleak and darkened hotel room, which is directed both at the audience and at that detective (Stephen Lang), who’s grilling him about the aftermath of his capture in that room. There’s also a subplot involving Danny’s latest documentary, about a Holocaust survivor (David Margulies) reconnecting with a German woman who once offered him a small bit of kindness while he was stuck on a Nazi train headed to a concentration camp. So there’s the actual story of Danny and Lexi growing close, there’s the Holocaust subplot, there’s the image of Danny bound up in a grim motel room, and there’s the constant return to Danny and the detective, all in 80 minutes, plus closing credits. One might presume that the problem with The Girl on the Train is that there’s too much story, but it’s the opposite: there’s almost nothing here, as the climax occurs before an hour has elapsed.

There’s also just about nothing in terms of the performances. Cusick, as he proved on Lost, has the chops to be a memorably raw and over-the-top performer and is charismatic enough to usually make anyone else sharing a scene with him a little bit better. But he and Aycox have zero chemistry together, which makes it awfully difficult to understand why Danny would do what he does for Lexi, aside from the script demanding it. (Too often, as well, Lexi’s demands are stated not by Lexi, but by the detective who’s ostensibly recapping Danny’s story, in between their encounters. Hard to recap something that hasn’t actually happened on screen.) What’s more, Lexi is an empty enigma; Aycox is unmemorable in the role, but to her credit, the dialogue she has is as pretentious as the way Lexi is described. She’s given so many conflicting characteristics by the men in her life that she might as well be the purposely, maddeningly enigmatic subject of Billy Joel’s “She’s Always A Woman.” The core of the story relies on Lexi being as alluring and mysterious as people say she is, but the character remains a cipher to the very end.

The Girl on the Train believes it’s far more intelligent than it actually is, both in structure and in storytelling. The jumps in chronology are wholly unnecessary–if there is meant to be any suspense in Danny’s capture in that dank hotel room, it evaporates as soon as we realize he survives to tell a detective his story–and the attempts at achieving some superior intellectual state through its discourse are equally misbegotten. The nature of storytelling, of deciding what is and isn’t real, and if we can even pinpoint what reality means, is a fine topic to consider in cinema. But this take on perception versus reality, and fiction versus nonfiction, is wholly flat and forgettable.