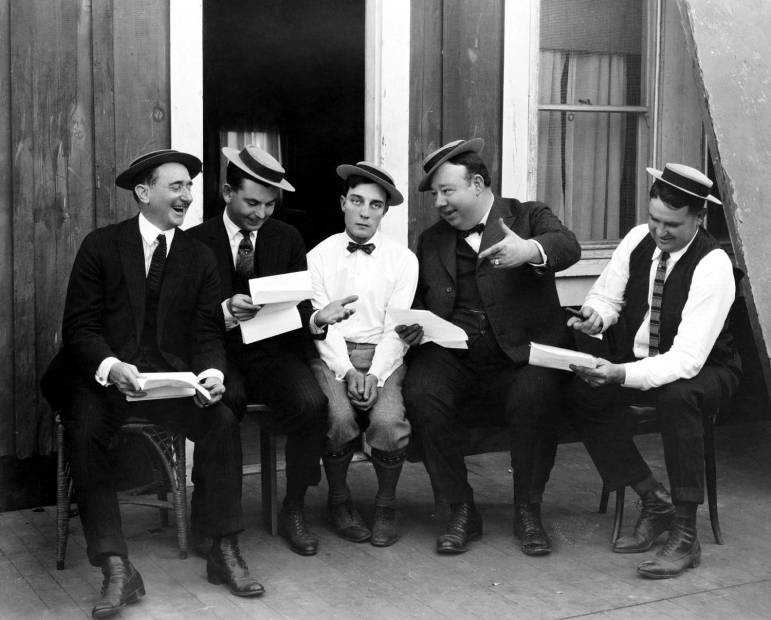 “The Gag Man” And His History with Buster Keaton

Editor’s note: Today, we’re proud to present readers with an exclusive passage from Matthew Dessem’s book The Gag Man. Be sure to pick up the book up now that it’s available for purchase from The Critical Press.

In retrospect, Clyde Bruckman was such a natural fit for Buster Keaton’s production company that it seems odd he didn’t land there sooner. Working on intertitles and gags hadn’t given him much experience with structure, but that wasn’t what Keaton was looking for, as he explained in the fall of 1921:

“I would suggest, to those who are writing for the comedy-end of motion pictures, that they concentrate on ‘gags.’ Novelty and originality are essential. We usually get an idea as to what our picture will be, then erect a set and start ‘shooting,’ improvising as we go along.

“So, I recommend to those who are inclined along comedy-writing lines that they do away with story and just mail in ‘funny pieces of business,’ and I am sure they will succeed,” Buster said. “We want ‘gags,’ not story.”

Gags, not story. That was something Clyde—whose work for Lyons and Moran had involved inserting jokes in already-finished films—excelled at. And there was another reason Clyde was ideal for Keaton’s company: Buster was a baseball nut and always had been, as he explained in his autobiography:

As far back as I can remember baseball has been my favorite sport. I started playing the game as soon as I was old enough to handle a glove. A sand lot where baseball was being played was the first thing I looked for whenever The Three Keatons [his family’s vaudeville act] played a new town. We always had a team in Muskegon, and later I organized baseball teams at my own studio and at M-G-M.

The team he put together, the Keaton Nine, was well known enough that the Los Angeles Times covered their games, and one sportswriter joked that Keaton’s employment application looked like this:

Please Check One of the Following Questions:

Are you a good actor?

Are you a good baseball player?

So Clyde, high school athlete, sportswriter, amateur baseball player, and gag man, was right at home. Though he’d played infield and sometimes pitched when playing with other sportswriters, Keaton hired him in a dual role as “outfielder and writer”; he’d stepped up a league. (One of Keaton’s stunt doubles, Ernie Orsatti, even made the leap into professional baseball.) There was no firm line between playing and working, as Clyde told it years later:

“Oh, we’d get hung up on sequences. Throw down your pencils, pick up the bats. The second, maybe third inning—with a runner on base—Bus would throw his glove in the air, holler, ‘I got it!’ and back to work. ‘Nothing like baseball,’ he always said, ‘to take your mind off your troubles.’ ” 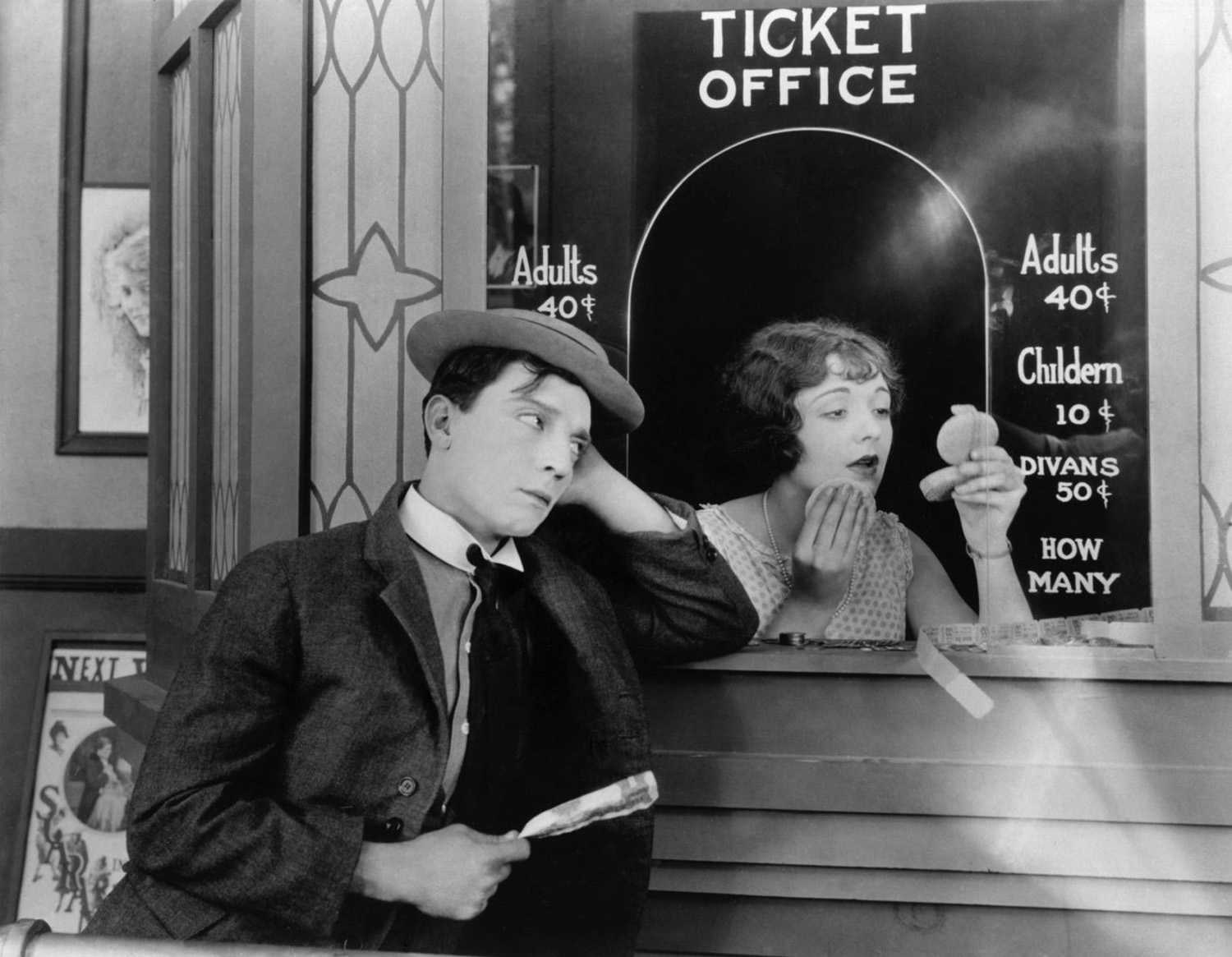 Nineteen twenty-one hadn’t started well for Keaton. He broke his ankle in February when an escalator malfunctioned during his first attempt to make The Electric House and was in a cast for months. When Clyde started that summer, Keaton had just returned from marrying Norma Talmadge in New York; although his leg was healing rapidly, he wasn’t ready for the kinds of athletic slapstick he’d made his name with.

So Clyde was faced with the problem of creating gags for an actor who couldn’t rely on the acrobatics that had propelled much of his work to date. But it wasn’t a problem he faced alone. The scenario department was headed by ex-vaudevillian Joe Mitchell, Fred Gabouri had been recently hired as the technical director, and Elgin Lessley, a one-time still photographer who’d started with Keaton back in the Arbuckle days, was in charge of the camerawork. At the time, Keaton had planned on alternating directors for his First National shorts between longtime collaborator Eddie Cline and cartoonist and ex-Keystone Kop Malcolm St. Clair; Cline was assigned to Clyde’s first project. Their workday started at the civilized hour of ten in the morning and ran until six, six days a week.

Keaton was always open to ideas from anyone on his staff, but came up with the central idea for The Playhouse himself: a vaudeville show in which Buster played all the roles. Since duplicating Buster would depend on visual gags more than acrobatics, Keaton could make the film while his ankle continued to heal.

The film’s showstopper is a shot of nine Buster Keatons on stage at once, an effect Keaton, Cline, and Elgin Lessley achieved through extraordinary camera trickery. (Its technical virtuosity is perhaps overshadowed for modern audiences by the fact that all nine Keatons are performing in a blackface minstrel show.) Clyde explained the shot to Keaton biographer Rudi Blesh: instead of shooting the entire frame of film twice or using an optical effect to superimpose images in post-production, the camera itself was rigged to only expose a small portion of the film at any one time, then rolled back, modified to expose a different section of the film, and reshot. The resulting effect was completely finished on the original negative—entirely in-camera.

This wasn’t a new technique, but it was usually done with only two exposures—and even then, it was hard to do well. It required extraordinary precision rigging the camera, then equally precise timing on the part of the actor, who had to respond to his or her performance from the first exposure. In the days of hand-cranked cameras, the cameraman had to be as skilled as the actor, as a failure to match the camera speed would throw the whole thing off. It was an excruciatingly difficult effect to pull off with two exposures. Buster did it with nine.

Part of the solution was technical. The exposure was handled through a contraption Clyde credited to Keaton himself:

“He built a lightproof black box, about a foot square, that fitted over the camera. The crank came out the side through an insulated slot. It was in the front that the business was: nine shutters from right to left, fitted so tight you could have worked underwater. You opened one at a time, shot that section, closed that shutter, rolled the film back, opened the next shutter and shot, and so on.

The secret to getting the timing right, as Keaton explained years later, was banjo.

“. . . it was hardest for Elgin Lessley at the camera. He had to roll the film back eight times, then run it through again. He had to hand-crank at exactly the same speed both ways, each time. Try it sometime. If he were off the slightest fraction, no matter how carefully I timed my movements, the composite action could not have synchronized. But Elgin was outstanding among all the studios. He was a human metronome.

“My synchronizing was gotten by doing the routines to banjo music. Again, I got a human metronome. I memorized the routines very much as they lay out dance steps—each certain action at a certain beat in a certain measure of ‘Darktown Strutters’ Ball.’ Metronome Lessley set the beat, metronome banjo man started tapping his foot, and Lessley started each time with ten feet of blank film as a leader, counting down, ‘Ten, nine, eight,’ and so on. At ‘zero’—we hadn’t thought up ‘blast off’ in those days—banjo went into the chorus and I into routine. Simple.”

So simple, in fact, that Keaton managed to execute it perfectly in eleven separate setups:

Besides the wide shot of the minstrel show, the close shot of the dancing act was probably the most challenging for Lessley and the banjo player, given that it’s a single twenty-second take and the two Keatons perform a complicated routine in perfect synchronization. As Patricia Eliot Tobias notes in her visual essay about the film, “Only someone as athletic as Buster Keaton would think that dancing was a good way to recuperate from a broken ankle.”

The result is dreamlike—director Albert Lewin called it “a phantasmagoria of masks,” as Keaton after Keaton interact and perform with each other. The second half of the film—the trick shots are, in fact, part of a dream sequence—picks up on the theme of doubling, putting Buster through his paces with mirrors, symmetrical sets, and even twins, only one of whom is Buster’s love interest. And it’s hilarious. So even from his first day, Clyde was working with the very best in the business, stretching the boundaries of what was possible in film comedy both technically and thematically. Moving to the outfield was a small price to pay. 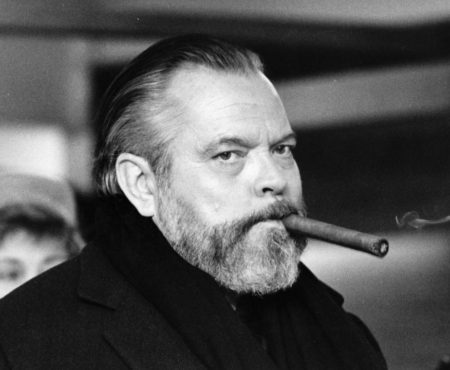