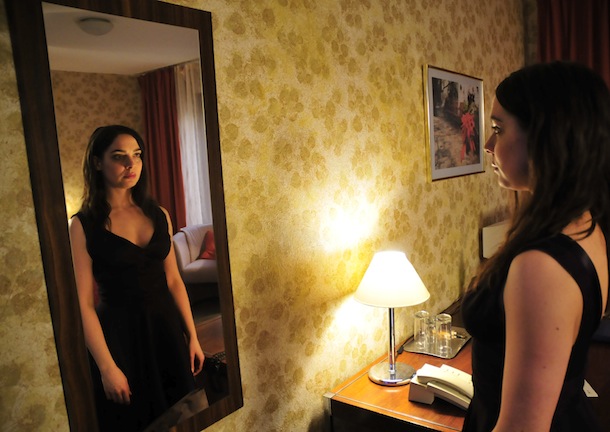 The Fire Heats Up Cold Euro-Drama

Brigitte Maria Bertele’s The Fire starts innocuously enough, with a thirtysomething physical therapist, Judith (Maja Schöne) heading out for a night at the club alone after her boyfriend (Mark Waschke) calls with an excuse for not coming. She dances innocently with an awkward lad before getting scooped up by a more suave, confident man who introduces himself as Ralph (Wotan Wilke Möhring). They have a good time and he offers to walk her home, but when she resists his advances, he drags her just off-screen and rapes her.

To leave the act outside the frame might seem an act of decency on Bertele’s part, but in some ways it anticipates the path of this crime’s fallout. Shot in distanced long takes, The Fire shows a great deal of other trauma throughout the rest of the film, but it concerns not the personal violations of rape but the ways in which the legal system, and society as a whole, only worsens the psychological impact with more personal violations and a noxious cloud of doubt and judgment.

The camera steadfastly stares at out along the water when Ralph drags Judith out of frame, but it places the woman well within an extreme long shot that shows her being medically examined in a penetrative fashion. Likewise, when she meets with a lawyer (Florian David Fitz), his questions about her relationship with her boyfriend and her actions that night feel like physical probes of their own. Soon, Judith worries so much about being taken seriously (despite her visible injuries) that she tells her boyfriend that tears in her vaginal wall are “good” because they prove there was a struggle.

Or do they? With recent news stories about bills that could allow rapists to sue their victims for having abortions, or even to claim joint custody of such a child, it tragically comes as no surprise when Ralph mounts a brutal defense that would seem cynical if it did not happen every day around the world. Bertele highlights the uphill battle rape victims face by changing up long shots for closer glimpses at faces that cloud with darker thoughts: of the lawyer who fatalistically smirks at the hassle of representing this woman, of the boyfriend who seems to wonder if blood isn’t the only fluid she washes out of her mouth when she cleans up after the attack. Bertele contrasts these judging looks with Judith’s face, all color drained to the gash in her lip, or to reddish pits under her eyes where tears, insomnia and fury mingle in a hellish display. The veneer of objectivity in the director’s removed style dissipates in such juxtapositions, communicating a powerful outrage at Judith’s treatment.

Less visceral, however, are the film’s brief stabs at becoming a revenge movie, a sort of Euro-sterile Ms. 45. The despair in Judith’s eyes, frightened and frightening in equal turn, certainly demand a justice the system will not provide. But the sequences in which Judith plots ways to get even with Ralph lack tension and merely restate the point that the law is arrayed against her, no matter what path she takes. Far more disturbing, and resonant, is the loophole she eventually discovers, one that cryptically but vividly coalesces the hypocrisies and Catch-22s a rape victim must endure through the prism of a shattered face.

Vyer Films (www.vyerfilms.com) is a new pay-to-stream service that believes great films matter. They bring the best films from around the world, as determined by festivals, critics, and our board of curators, previously undistributed in the U.S. directly to the viewers that want them: audiences looking for something new, unique, and unlike anything available at the local theater. Packaging each rental with exclusive interviews, essays, and more, Vyer Films helps spur the kind of discussions we all want to have after seeing a great film, the ones that go on much longer than the film itself. With compelling films, thought-provoking features, and the convenience of streaming, Vyer Films doesn’t want you to spend your time looking for something good to watch, they want to help you see something new.