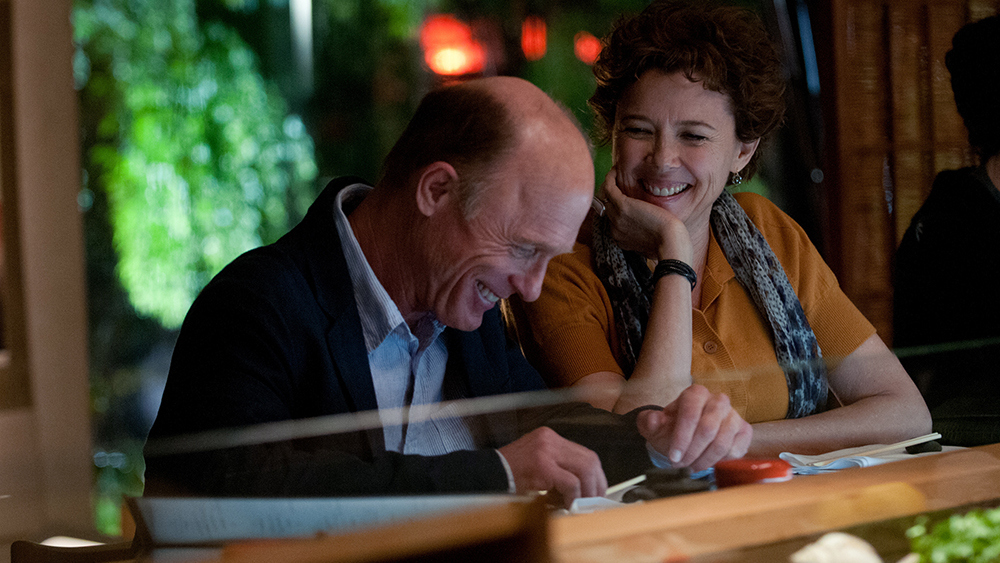 “The Face of Love” Will Give You Vertigo

In the first act of suspense-driven melodrama The Face of Love, protagonist Nikki (Annette Bening) converses with her daughter, Summer (Jess Weixler), expressing her concerns over the younger woman’s relationship; like any good mother, Nikki doesn’t want her child to get hurt. But Summer expertly turns the proffered misgivings aside with her own wisdom, pointing out that in matters of love, hurt is often unavoidable. It’s as close to a thesis statement as filmmaker Arie Posin bothers making, and it’s an idea that he mostly carries through to the film’s bittersweet ending.

It’s also redundant. Nikki learns this lesson in the harshest way possible before the aforementioned exchange even occurs; the opening sequence shows us that Nikki’ beloved husband, Garrett (Ed Harris), died five years prior in a fatal moment of ill-judgment in the riptides of Mexico’s shoreline. The film intercuts between the moment she discovers his body on the beach, and the self-imposed isolation of her bereavement; by the time mother and daughter have their talk, the point has already been made far more elegantly through Posin’s craft.

But the repetition sets us up for what happens next. Hanging around her old haunts (notably, the Los Angeles County Museum of Art), Nikki spies a man who looks exactly like Garrett; she pursues the man (also played by Harris), introduces herself to him (his name is Tom), and sparks an amour with him, though so far as he’s concerned, there’s nothing weird or illicit about their bond in the slightest. Not at first, anyways; over time, he comes to realize that she’s hiding something from him, or perhaps just hiding him.

We’ve seen situations like theirs committed to film before; The Face of Love‘s most obvious touchstones are Vertigo (which receives direct reference here), movies like Laura, and pretty much every picture ever made that concerns itself with the identity-fracturing experience of meeting your doppelganger. (The film also happens to be one of four movies in 2014 that revolve around similar conceits, from The Pretty One, to upcoming, dueling features Enemy and The Double.) Yet Posin, last heard from with 2005’s Chumscrubber, borrows ideas from these movies rather than vision. It’s his own stamp on a retread concept.

The Face of Love has endured sharp criticism for the enormous amount of stylization Posin employs in his production designs; every scene appears staged down to the bowls of fruit that rest atop kitchen counters. The effect, arguably, leaves the entire film feeling void of substance by virtue of his overly-fussed mis-en-scene; too much directorial control breaks suspension of disbelief, throwing back the curtain and reminding us that we’re watching a story unfold over the luxurious backdrop of a movie set. 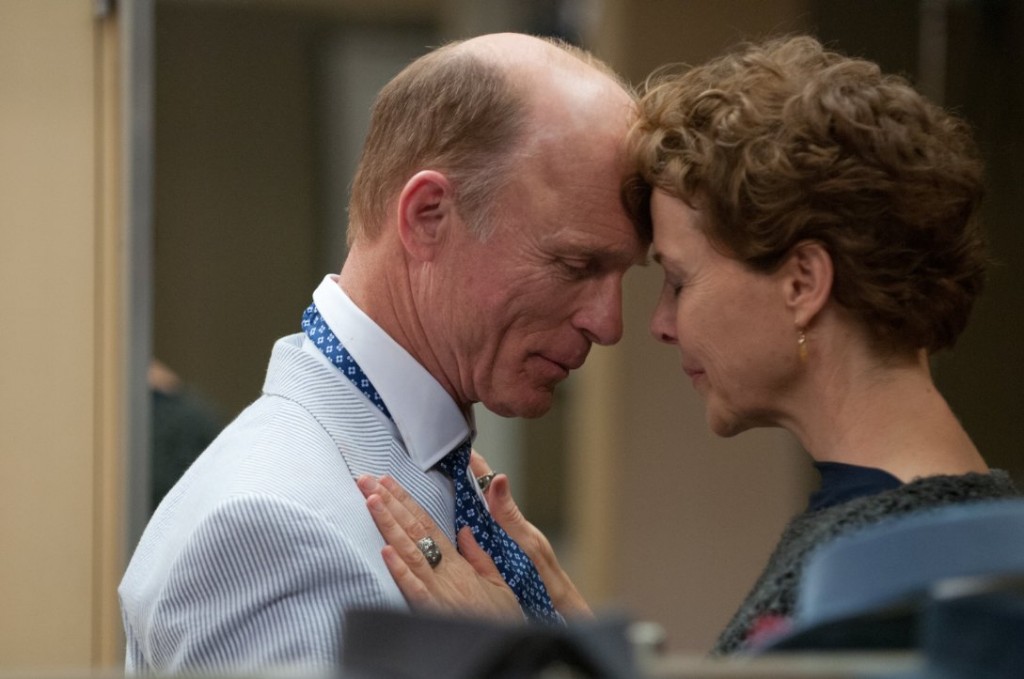 Frankly, that complaint has little merit. Posin isn’t the only filmmaker in the world whose touch can be seen in every detail captured within the frame of his camera, and as much as he has clearly obsessed with arranging those elements just so, his efforts can only be described as impressive. The Face of Love looks exquisite; Posin has a clear visual command that shows in every image he commits to the screen. That’s a necessary and welcome attribute. Anything less than a clear-cut sense of personality from behind Posin’s lens, and The Face of Love might have wound up a half-baked faux-tribute to the works of Hitchcock.

The issues that stymie the film actually originate from the story’s core. Posin has a gift for teasing out tension, orchestrating countless near-misses in which Garrett – kept in the dark about the drive behind Nikki’s attraction to him until the final act – comes uncomfortably close to stumbling upon the truth. She campaigns relentlessly to keep Tom a secret and to hold him at arm’s length from her friends and family, lest her tragic, possibly crazed infatuation be exposed; each of these moments is a threat to the survival of her fantasy.

What’s problematic here is that The Face of Love treats these close calls as though they’re disposable, rather than essential beats for sustaining the film’s central conflict. When Summer and Tom finally meet, the reaction is explosive and alchemical; it’s one of the film’s best scenes, overblown but necessarily so. We wait with baited breath for Roger (Robin Williams), Nikki’s lovelorn neighbor and Tom’s friend, to enjoys his own confrontation with the man. Sadly, it never comes, and despite coming so close to figuring it out, Garrett reveals Nikki’s mania too late, robbing the film of the juicy, overwrought soap opera theatrics offered by its premise.

Instead, Posin lets Harris and Bening get cutesy and maudlin, which renders The Face of Love little more than a pretty diversion for most of its running time. Posin’s leads have chemistry all day long; Harris in particular is in fine form, blending masculine modernity and  rascally charm, while Bening brings a steely, determined desperation to Nikki and her search for emotional succor. But the film gives them fluff to play with, as opposed to real, dangerous material with teeth. The effect is a work that’s far less dramatic than it ought to be – which is far more troubling than a fetishistic devotion to style.