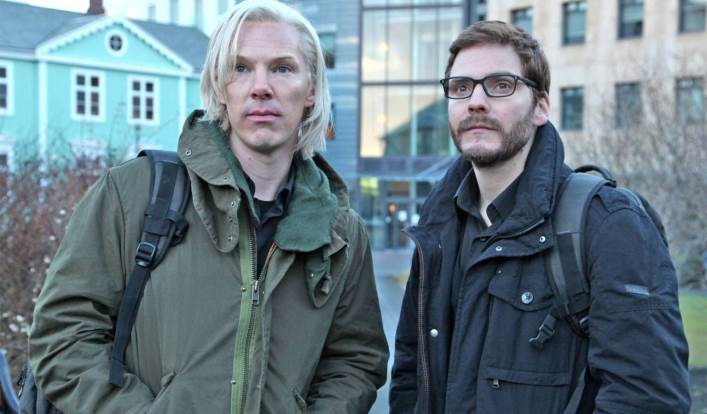 ‘The Fifth Estate’ Lacks The Intrigue of Its Subject

If you like true-story potential throttled into banality, then look no further. Depicting Daniel Domscheit-Berg’s (here played by Daniel Bruhl) involvement with and subsequent banishment from Wikileaks, The Fifth Estate is a biopic that doesn’t have either the courage to say anything, or enough information on the star attraction – Julian Assange, played by a mesmerising Benedict Cumberbatch – to justify its own existence. Charting Wikileaks’ beginnings as filler at tech conventions to its reputation as a hugely influential online organisation, The Fifth Estate is a great performance surrounded by a very bad movie.

Benedict Cumberbatch is excellent. Turning the lack of detail in the written character to his advantage, he makes Assange a riveting enigma. Rather than criticise Assange through his portrayal, Cumberbatch triumphantly creates a real mess of contradictions, despite the very basic character as-written. That charm, that blank-eyed stare, that rich, hypnotic interpretation of Assange’s Aussie twang – they’re all Cumberbatch’s inventions. It’s really quite unfair that he’s flanked by such a bad film. Cumberbatch just drifts through Bill Condon’s movie – past all the awful, on-the-nose dialogue and flatlining supporting performances – untouchable, filling his role with nuance and unsettling charisma. Do I need to repeat that he’s the only reason to watch it?

The script for The Fifth Estate had to be written fast (God forbid the film get released before the real-life Julian Assange did something to selfishly change the narrative), leaving us with a notable lack of insight. To explain away Assange’s duplicity, arrogance and egomania, the film constantly sends us back to the shorthand that all Assange’s personality traits stem from his being raised in a cult. Any human being who’s ever existed would know life could never be boiled down to such simplicity. And yet this script was, apparently, written by such a human being. That would be Josh Singer, WGA-award nominated screenwriter.

Daniel Bruhl, so good in last month’s Rush, has nothing to work with as Daniel Domscheit-Berg. His progression from corporate underling to Wikileaks revolutionary is first draft-blunt, but Bruhl seems to recognise that it doesn’t matter anyway, because this is a platform for Cumberbatch, and nobody else. It’s the same with Laura Linney, Anthony Mackie, Peter Capaldi andDavid Thewlis. These actors, so usually dependable, are bad, bad, bad, because the script they’re working from is bad, bad, bad.

Scuppering the film on the directorial front so that he and Singer can make a two-pronged assault, Bill Condon steals the style of The Fifth Estate from Paul Greengrass’ two Bourne movies. He clearly doesn’t understand that those films were sleek and fast-paced because those films were all about the chase. In The Fifth Estate – as in any biopic – the focus should be on the subjects, but Condon goes handheld and favors humourless, colourless minimalism over character development and thematic depth.

I’m not here to judge Wikileaks or the real Julian Assange, because it’s not in my job description to do so. But I will judge the way The Fifth Estate handles the story. Neither pro-Wikileaks nor anti-Wikileaks, The Fifth Estate is worse than just a bad movie about Julian Assange: it’s a safe one. The material available, with so many characters and contemporary themes ripe for exploration, has been gutted in favour of a movie takes no risks whatsoever.

Perhaps it’s not all bad. The Fifth Estate argues that you should trust nothing and no-one, not even The Fifth Estate. In a pointless meta-coda, Cumberbatch-as-Assange conducts an interview from his London-based Ecuadorean bunker and dismisses the film as fiction. And sure enough, by the end, I didn’t trust this film. Shot in a mock-verite style from a trite, cliched script, the film repels any sense of realism. It all rings as false as Cumberbatch’s wig. The Fifth Estate has nothing but its awards-worthy central performance. It doesn’t deserve it.