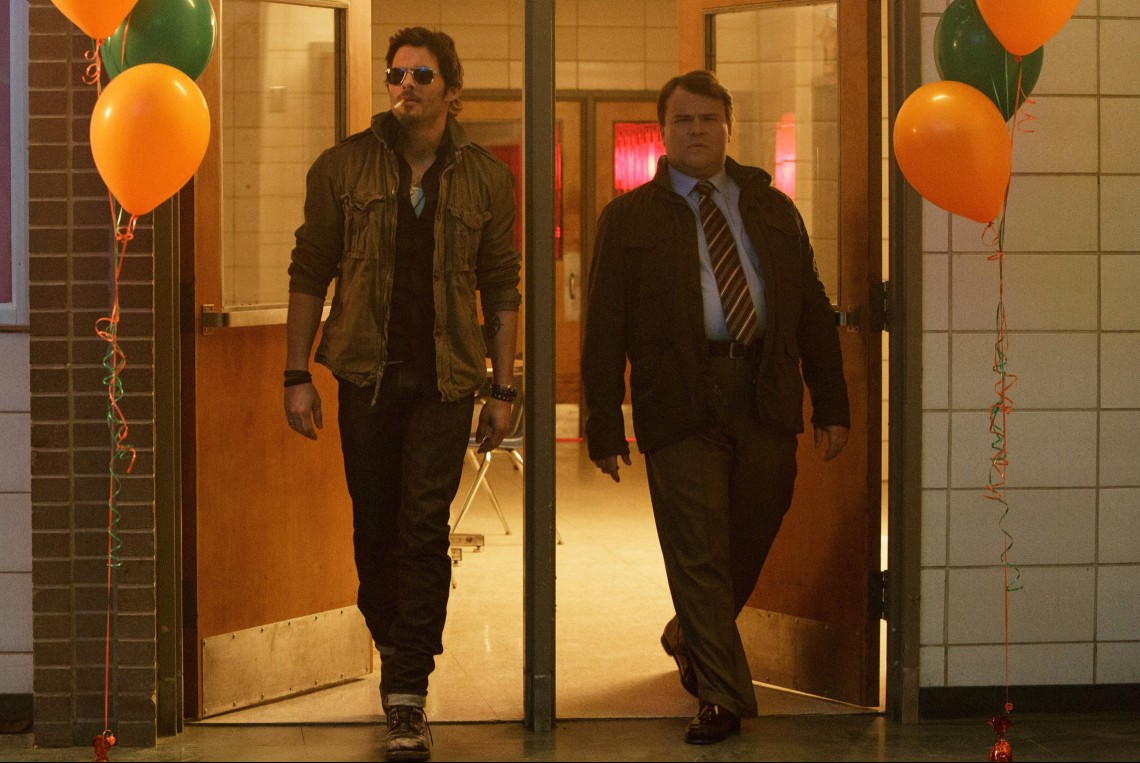 Warning: There be spoilers within.

Reflecting upon the years since high school and re-evaluating life goals and missed opportunities is a tough exercise. Yet, in The D Train, the now-middle-aged Dan Landsman (Jack Black) seems to have done pretty well for himself—especially when considering he’s a clingy, uncool guy with an annoying sense of humor. Married to the lovely Stacey (Kathryn Hahn) and a father of two beautiful children—one of whom happens to be a textbook “good kid” (Russell Posner)—Dan lives in a serene Pittsburgh suburb and has a decent-ish job. He’s also the head of his high school reunion committee and is pressured to organize a well attended, smashing party.

Convinced that he can turn the reunion into a success by making the coolest guy in his graduating class, Oliver Lawless (James Marsden), attend the party, Dan lies to his wife and his technologically illiterate boss, Bill Shurmur (Jeffrey Tambor), and heads to LA to find Oliver. Although initially reluctant, Oliver—who’s now a struggling actor—falls for Dan’s motor-mouth pitch, and agrees to help him with his complex and totally unnecessary (as the film thankfully acknowledges) cover-up to Dan’s boss regarding his sham, “business-related” reasons for traveling to LA.

To its credit, The D Train throws a few genuinely daring and provocative surprises at the audience during the LA-based scenes by deconstructing the concept of bromance. In building the chemistry between the two men, who come to find they have more in common than they first realized, The D Train unexpectedly twists the arm of Oliver’s perceived manliness and Dan’s stringency. After a long night of partying and bonding—which includes a well-played, amusing scene where Dermot Mulroney plays himself—Oliver and Dan end up in bed together. To Oliver, a casual and active bisexual—although he refuses to live with any sexual labels, natch—this incident doesn’t mean much, but it makes Dan question everything about himself, including the extent of his expectations from Oliver.

Sadly, The D Train—the directorial debut from Yes Man writing duo Andrew Mogel and Jarrad Paul—abandons this particular plotline’s potential for profound meanings and gendered analysis. Instead, the film chooses to preoccupy itself with bad puns and insufferable jokes that target oblivious luddite bosses. Is it really funny that an older executive doesn’t know how to cc people to an email, or that Google is the best search engine? Thus, what could have been an exercise on the hysteria of masculinity and a bittersweet dramedy on moving up and on in life ends up feeling more concerned with displaying Jack Black’s facial mimics and body language instead of harmonizing them with the supposedly broken-down character he embodies. And, frustratingly enough, The D Train never makes much of an attempt to offer any real insight into the continually exasperated Dan (beyond “he’s just not cool, OK?”) to help us make some valid sense out of his crisis.

Consequently, The D Train can easily be distilled as a disjointed collection of irritating humor sprinkled over moments that seek—yet seldom approach—sincerity. Even more egregiously, and unfortunately not at all surprising for a buddy comedy, there isn’t much material given to Hahn as Dan’s wife—a misstep that could have deepened the film’s reach and made a more robust commentary on sexual norms. Audiences can rest assured, however, that they will get to watch Black rant like no one’s business, pause with a devilish grin, and stare wide-eyed plenty of times. The D Train signals a return to Black’s signature comedic qualities, which fit Richard Linklater’s School of Rock and the Farrelly Brothers’ Shallow Hal like a glove. But in The D Train, none of it really belongs.