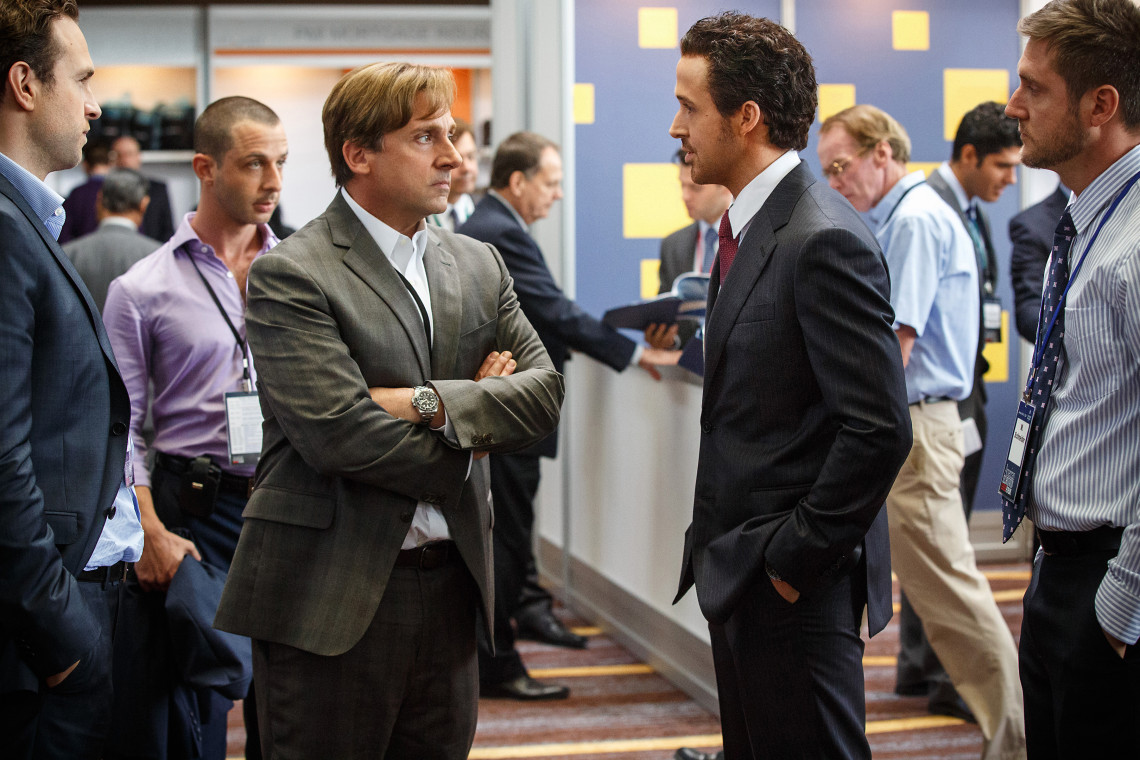 “The Big Short” Winds Up Being Vaguely Condescending

The fundamental argument of Adam McKay’s The Big Short, adapted from Michael Lewis’s overview of the housing collapse of the late 2000s, is that the basic truths of the economic collapse are easy to understand but are made difficult by the architects of that collapse to seem like they were the only people capable of comprehending it. More than once, the film screeches to a halt to throw the task of exposition to a completely unrelated celebrity who breaks down the bubble of the housing market in concise, legible metaphors. These cutaways are brief intrusions, but they feel like the whole point of the film, a means of education in the style of the videos that regularly dot McKay’s Funny or Die website.

The film darts between a few significant characters, all of whom are linked by an anti-social streak of one kind or another that primes them to spend their time lost in numbers. Michael Burry (Christian Bale), a hedge fund manager with Asperger’s, actually reads the dictionary-length paperwork filed for batched loans, discovers the certainty of their default, and invests his company’s money in then-unheard-of default swaps that bet against the housing bonds. Though he stands to make billions if he’s right, Burry seems mostly intrigued to test his hypothesis, albeit with hundreds of millions of investor dollars. Jaded trader Mark Baum (Steve Carell), on the other hand, seeks to profit off the impending doom to teach the system he hates a lesson, while young upstarts Jamie (Finn Whitrock) and Charlie (John Magaro) just want to make a fat wad of cash so they can join the very enterprise they’re betting will self-immolate.

This clash of sensibilities jerks the film around, which only adds to the jittery energy created by the camerawork. Shot in a style akin to one of Armando Iannucci’s satiric mockumentaries, the film replicates the simple aesthetic humor of In the Loop in its fly-on-the-wall observation and use of editing as a means of hammering home the most devastating punchlines or crafting jokes out of cutting away from arguments as they reach fever pitch. This structure reflects, then comically orients, the breakneck speed of Wall Street trading and convoluted legalese used to cover asses, even as it slices through its own Gordian knot with the frequent pauses for lucid explanation. The relentless pace and jumbled imagery carries over to character building, with impressionistic glimpses of memories to give the people context without spending too much time on such things.

At the film’s best, the cast dig their nails deep into the farce of the banks’ unaccountability, finding doomed communities filled with houses sold to anybody who walked in the door by asinine real estate agents and bankers who gladly accept the suspicious amount of money slowly being bet on their failure because they simply cannot turn down cash. Most telling of all is how boring the power players are. The idiots signing poor people onto mortgages left and right blow their commissions on boats and other luxuries, but the elite bankers make money simply to make it. (Compare the buttoned-up soullessness of these brokers and bankers to the coke-fueled bacchanalia of The Wolf of Wall Street, vaguely parodied here with flashbacks to pudgy, middle-aged bankers blowing the profits of their multi-billion-dollar schemes on cheap strip clubs.)

Yet if the film uses its vulgarity and wit to lacerate a political quagmire and to implicate every facet of a tangled system of private greed and federal ignorance, it fails to turn its sights back onto its characters. These are not crusaders: they are hypocrites who see the coming apocalypse and choose not to warn anyone but to buy up fallout shelters. Occasionally, someone deigns to call one of them out, like a savings-and-loan rep (Melissa Leo) hitting back at assertions of Standard and Poor’s cooking the books for their own profit by pointing out that Baum and his team stand to gain from a collapse, or Brad Pitt’s adviser yelling at Jamie and Charlie for cheerleading the burst of the bubble with some stats about how unemployment literally kills.

But these are isolated moments in a movie that otherwise smirks in the face of oblivion (Ryan Gosling’s smug, conniving banker narrates with slimy pride), at least until its last 20 minutes or so, at which point it lurches into maudlin horror at the pervasive impact of the 2008 crash. Ideally, this downturn should mimic the late stages of something like In the Loop, where the relentless comedy parts to remind audiences of the real-world nightmare toward which the story had been hurtling all along. But the conflagration is undercut by a baffling decision to encase everything in a weak Socratic irony that asks broadly obvious, rhetorical questions about the consequences of the collapse. Surely bankers were jailed and the big institutions regulated, characters ask not to each other but out into the frame, and into the audience.

Yet we’re not even a decade removed from the event, and everyone knows that nothing changed, which gives the finale a vaguely condescending tone, as if it did not trust us to remember. Walking right out of The Big Short, its great cast and occasionally powerful reminder of the absurdity and agony of living through an economic implosion, is a galvanizing experience. The farther one gets away from it, however, the harder it becomes to figure out who this movie wants to address, and why it thinks we’re all too dumb to remember outrages that are still sending ripples through political factions in this country.