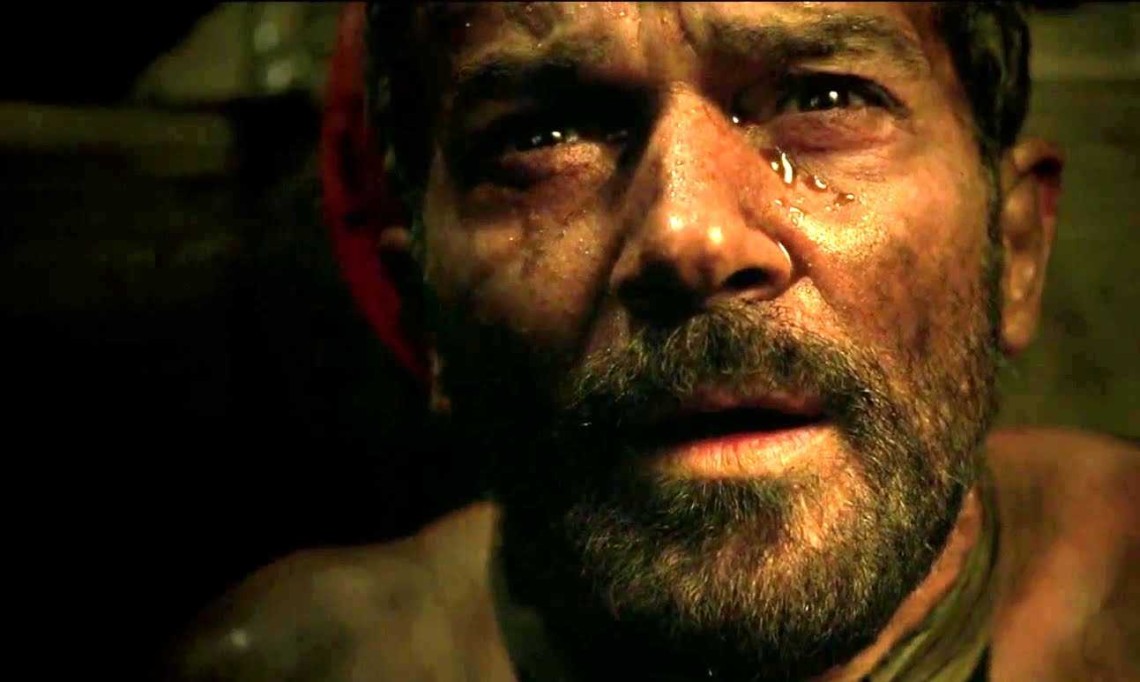 “The 33” Fails At Being Authentic

Patricia Riggen’s The 33 ends appropriately with a seaside reunion between its cast’s real-life counterparts: The cadre of Chilean miners who lived buried beneath a mountain for 69 days in the 2010 Copiapó mining calamity. One by one, Riggen introduces her audience to these men in a beautifully lit scene that pays homage to the strength of their spiritual bond. It’s a lovely, moving sequence that, by the quiet strength of its emotionalism, manages to underscore the film’s fakeness. The 33 is too wrapped up in its theatricality to maintain a sense of authenticity.

A brief history lesson, if you’re not up and up on the incident Riggen has reenacted in her film: In 2010, the San José copper-gold mine, located in Chile’s Atacama Desert, experienced a big damn cave-in that trapped 33 truly unfortunate workers toiling within its cavernous gut for roughly two months. Riggen, through her lens, captures both the hardships placed upon the miners as they try to cope in their new environs, contending with mental and physical strain along the way, and the anxieties felt by their relatives, stuck on the surface with no way of getting in touch with them. We feel, at times, that the miners’ families—their brothers, parents, children, wives, mistresses—are in some ways worse off than the miners themselves. At least the 33 know where they are and where they stand.

Not knowing, though—that’s just plain terrifying. Riggen appears to care deeply about The 33’s existential crises; you get the impression that she set out to tell an intimate, personal story rather than a broad, paint-by-numbers Hollywood bio flick. She’s more interested in the men and women she’s making a movie about than hitting manufactured melodramatic high notes. All the same, The 33 remains mostly sanitized and without bite. When the film invests itself in exploring the mental states of its characters and confronting their trauma, it’s passionate, if straightforward, “true-story” filmmaking. There’s a sequence where the miners, short on optimism as they scrape the bottom of their ration supplies, have a joint hallucination of sorts where their meager meal becomes a grand feast; their spouses and mothers appear from the shadows, arms laden with platters of their favorite foods. For a brief time, their grotto sanctuary lights up with joy. Then the moment passes and depressive reality sinks in.

The 33 works best as an examination of how the miners deal with, and are affected by, their circumstances, which isn’t necessarily to say the film works well. The men, led primarily by the gregarious Mario Sepúlveda (Antonio Banderas) and the more hangdog Luis Urzúa (Lou Diamond Phillips), fracture, fray, and threaten to unravel at every turn. We can hardly blame them for their fragility, though we barely get to know them as individuals, which makes empathizing with their plight difficult at best. Even Mario, the character Riggen puts most of her focus on, feels like a cipher. If you know the guy at all, it’s probably through news clippings about his overnight celebrity. “Super Mario,” people called him. Banderas is the right man for the job, but the writing lets him down.

An underdog subplot of one scrappy government official (Rodrigo Santoro, playing Minister of Minery Laurence Golborne) doing his darnedest to save the day makes The 33 even less successful. A more daring picture would remain set within the bowels of the earth rather than cut back and forth between the underground and topside. In an odd way, watching Santoro struggle against governmental bureaucracy and corporate apathy diminishes the effect of tenser sequences where the miners battle for food, for hope, and for their sanity. The 33 isn’t the first rescue mission film to anchor itself in the perspectives of both the rescuers and rescuees alike (think Apollo 13), but as mining contractors show up at San José in force, so too do the hokey clichés. Turns out that to solve a mining problem, you just have to think like a miner. Who knew?

Gabriel Byrne, playing the operation’s chief engineer, drops that nugget of wisdom in the film’s third act, and the actor’s Irishness sticks out like a sore thumb. There are, in fact, sore thumbs all over The 33’s cast—not just with Byrne but Juliette Binoche, who plays the older sister of one rough-around-the-edges miner, and Bob Gunton, who is inexplicably the Chilean president Sebastián Piñera. (In fairness to the film’s casting director, about half of Chile’s population is ethnically European, and Binoche, being Binoche, ably passes the identity test, but c’mon: You can do better than Bob Gunton for Prez.) The whitewashing is the least of The 33’s problems, but it does have the side effect of highlighting its swath of disingenuous narrative elements and studio-gloss phoniness.