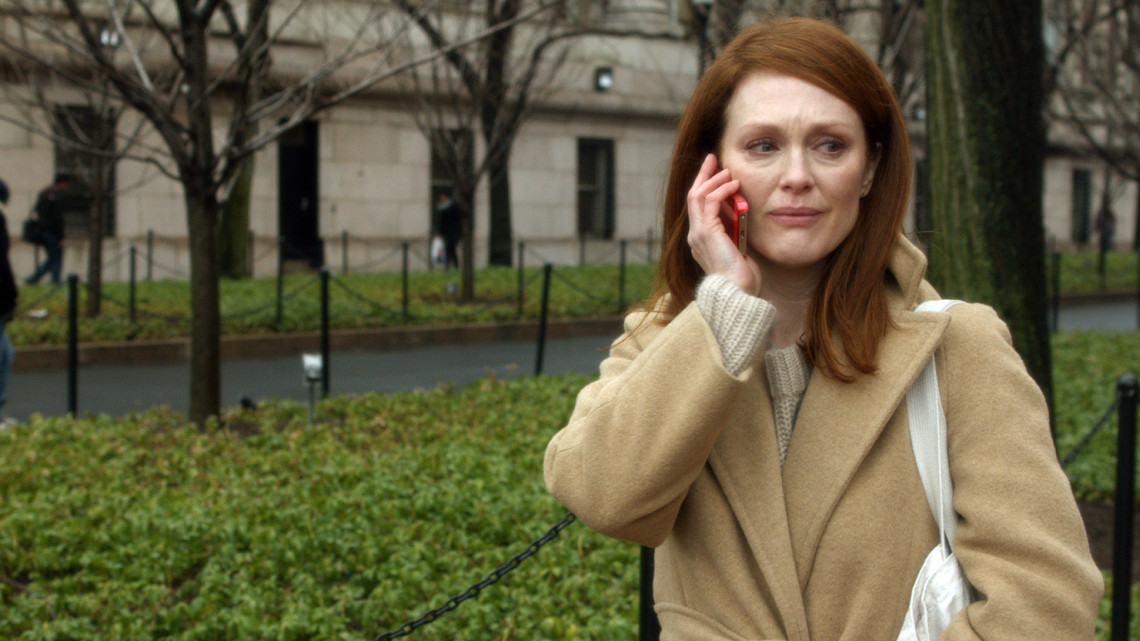 I’ve been hearing for a while now that it’s Julianne Moore’s year. If you ask me, every year should be Julianne Moore’s year, but nevertheless, this is the conventional wisdom being passed around by those who make their living spending an unseemly amount of time tracking the Academy Awards as if it were some sort of horse race that actually matters.

Best that I can tell, 2014 was considered an unusually weak year in the Best Actress field, even by Hollywood’s horrid standards of roles for women. I didn’t think it was weak at all, but I suppose if we must restrict our choices to American films deemed by industry insiders as Oscar Contenders that were also released by distributors that can afford to mount multi-million dollar awards campaigns, then yes, it probably was. (Don’t get me started.)

So, much like a few years ago when Jeff Bridges received his lifetime achievement, gold-watch Oscar for a mediocre picture nobody saw, Julianne Moore has become the presumptive front-runner for a middling movie that hasn’t even come out yet. She’s overdue. Everybody loves her. It’s time.

It also helps that Still Alice is the kind of movie that wins Academy Awards. It’s tasteful to a fault, exploring a terrifying subject with the utmost decorum. You feel bad when it’s over, but not too bad. Adapted from Lisa Genova’s novel by the married writing-directing team of Richard Glatzer and Wash Westmoreland, the film stars Moore as Alice Howland, a super-cerebral linguistics professor at Columbia University, stricken with early onset Alzheimer’s.

There’s no way for a movie about Alzheimer’s disease to not be inherently horrifying. A shitty part of life is that we all eventually learn to accept that our bodies will someday betray us, but the mind is a totally different matter. Losing physical ability is sadly inevitable; losing comprehension is the stuff of nightmares.  Moore, a brilliant actress, does an expectedly outstanding job conveying Alice’s slow drift away from the world. Confusion gives way to helplessness, and then terrible fear.

If only the movie deserved Moore’s precision work, and if only there were more to this character than the cheap irony of a language professor losing her words. Still Alice is set in the plush, weirdly stilted upper Manhattan that I only thought existed whenever Woody Allen used to try and make a tragedy about WASPs. Everything is so genteel and cushioned, exemplified by Alec Baldwin’s uncharacteristically terrible turn as her research scientist husband, coiffed in a $500 haircut inexplicable for a lab rat while over-enunciating some seriously awkward dialogue.

It all feels so timid and Hallmark-ish, particularly when stacked against previous, gut-wrenching Alzheimer’s dramas like Iris and Away From Her, films that rooted around in the husband’s POV with a conflicted, messy anxiety Still Alice keeps carefully at bay. This is a movie of pristine surfaces, and an over-determined camera strategy that has the other performers receding out of focus as Moore’s facilities narrow.

The one rogue element here is Kristen Stewart’s outstanding performance as Moore’s black-sheep daughter, who earned her mother’s ire while struggling to get started as an actress in the downtown theatre scene. The rest of Still Alice‘s supporting cast (including a wretched Kate Bosworth) is fussy and self-conscious, Stewart simply is. There’s such a rawness to her talent, so we all really need to get over the easy Twilight jokes and embrace her sullen unpredictability and lanky moments of unexpected grace. She’s the real deal.

Glatzer and Westmoreland certainly know what they’ve got here. In lieu of an ending of their own, they just have Stewart read aloud from Tony Kushner’s Angels in America. She sells the shit out of an emotional crescendo that someone else wrote about a totally different frightening disease, so even the climax is borrowed and once-removed.

I don’t care whose year it is, these two actresses deserved better.