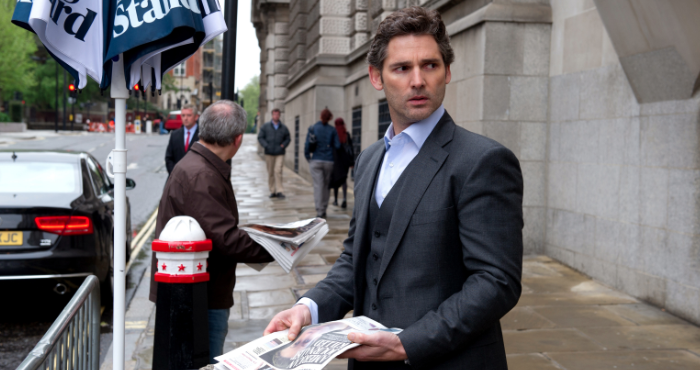 In the harrowing opening sequence of Closed Circuit, we witness a bustling market in downtown London through the lens of one of the city’s hundreds of thousands of surveillance cameras. The screen splits, and we now see twice as much of the market. The number of angles doubles, then quadruples. We hear snippets of conversations, make out distinct individuals going about their day, and get small portraits of private lives.

As the length of this sequence extends, the sense of dread heightens; the more cameras provide us with additional information, the less detail we actually absorb. Once a seemingly-innocuous truck backs into a space it shouldn’t, we fear the worst, yet before our eyes have a chance to focus in on what’s unfolding, a large explosion goes off, ending 120 innocent lives, including those upon whom we voyeuristically spied. Director John Crowley gives us the point-of-view of those behind the surveillance cameras, able to view the sordid details of our private lives, yet unable to effectively stop our lives from being taken.

With the attorney general (Jim Broadbent, always a welcome sight) vowing for legal transparency in the pending trial, Martin Rose (Eric Bana) finds himself suddenly needing to take over for the previous defense barrister, lost tragically in a suicide. However, the delicate nature of this case in regards to national security requires both a defense barrister to defend the accused in an open trial, and a “special advisor” to convince the judge to de-classify top secret evidence.

Inconveniently for Martin, the latter happens to be Claudia Simmons-Howe (Rebecca Hall, also always a welcome sight), with whom he was embroiled in an affair that eventually cost him his marriage. When Claudia is intimidated by an MI-5 agent (Riz Ahmed) and Martin is told by a New York Times reporter (Julia Stiles) that the previous barrister didn’t kill himself, it seems there may be just cause for outright paranoia.

Any genre fan would take that synopsis and start to immediately put the puzzle pieces together, yet Knight’s script avoids some of the more obvious cliches. Sure, there’s some clunky exposition, but the relationships between the characters add some welcome wrinkles to expectations. Jim Broadbent’s attorney general seems an easy candidate for the Shocking Twist Villain, yet his relationship with Martin is complex from the jump. He reveals himself early on to know more than meets the eye, relishing being the chessmaster to Martin’s noble pawn, yet he remains genuinely concerned for Martin’s well-being.

Martin and Claudia also avoid the needlessly tired love story: their past is messy, their present is treacherous, and their future seems to indicate no change. They are concerned for one another in the same way one should be concerned for an ex-lover, allowing for compassion without passion. “You are undoubtedly the worst thing that has ever happened to me,” Claudia tells Martin at one point, yet without the histrionics or tears; it’s delivered wistfully, with earnest nostalgia. The matter-of-fact nature of their complications makes them one of the more pleasurable screen couples of the summer.

Make no mistake, Closed Circuit is far from a groundbreaking genre entry. It boasts no marquee performances or riveting action sequences, and provides no memorable lines or showdowns. However, Crowley and screenwriter Steven Knight deliver conspiracy genre thrills with stylistic attention paid to our ultra-timely mistrust of government surveillance. Everyone in the cast does admirable work, but the real star of the film is the camera, forever peering at the actors from across streets, around corners, behind windows, and through gates.

Nearly every set is packed with tall glass windows, and almost every scene contains a myriad of extras, all of whom look suspiciously innocuous. Every cause for suspicion and every potential source of danger is magnified, so that despite the somewhat by-the-numbers nature of the plot, a thick tension prevails. Surveillance isn’t helping the surveilled; it’s helping the surveillants imprison someone underneath a series of camera lenses and phone taps. Their secrets remain hidden, the circuit of knowledge closed behind doors and cameras. Closed Circuit wrings some thrills from the scary possibilities of what lies within that loop; it’s nothing new yet succeeds in feeling relevant.