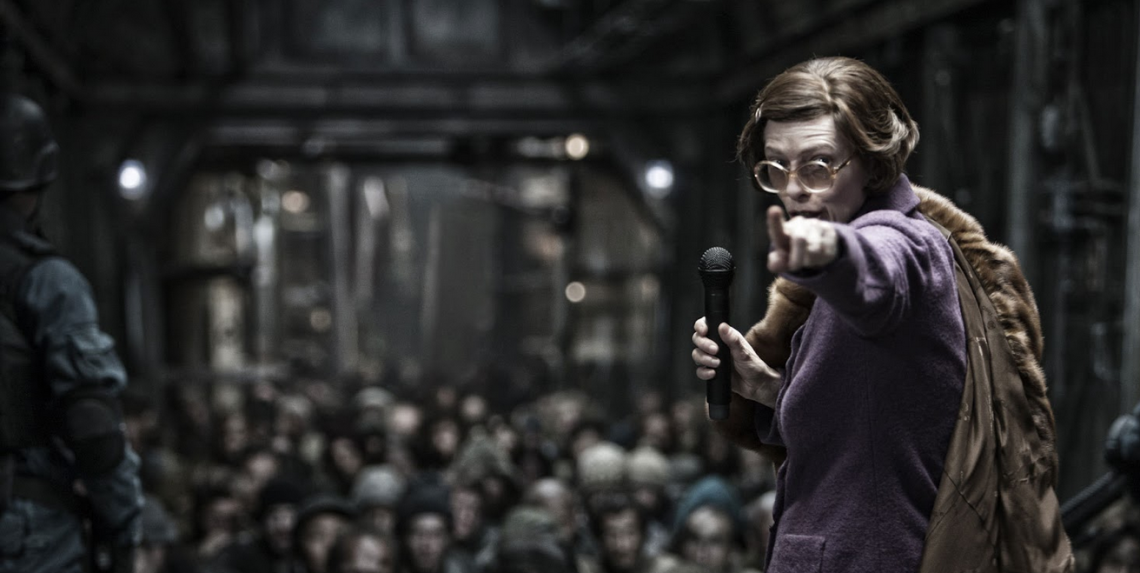 “Snowpiercer” And the Eclectic Whiteness of the Eco-pocalyspse

Note. This review is based on the version screened during the 2014 Berlinale Film Festival.

Joon-ho Bong’s The Host was delightfully eclectic, allowing gore and camp to swiftly mingle within a more traditional horror narrative frame. The Korean director’s latest cinematic attempt is not as modest and independent, taking on a more serious mask. Dressed to impress, Snowpiercer has a significantly bigger budget and a star-studded cast – plus an impressive selection of ideas. Bong tackles the subject of eco-pocalypse, something that contemporary culture’s been drawing from for a while, and adds a socially involved note by introducing thoughts on class inequality and exploitation deriving from uneven distribution of power.

The future is white, and in minus. Desperate attempts to lower the world’s temperature, heightened to cuckoo levels by ignorance-fueled global warming, have turned equally inconsiderate: shooting a toxic-chemical-filled container into outer space actually deep-froze the Earth after exploding, instead of cooling it down. Now the humanless and still icy whiteness is regularly traversed by Snowpiercer, a futuristic train traveling through special inter-continental tracks surrounding the whole globe, one lap a year. Passengers of this safe shelter-y coffin are one weird bunch of misfits, evenly distributed along the train’s separate compartments, segregated according to their importance, value, and wealth. Needless to say, such segregation, imposing the idea of uber-mensch into effect, rings several uncomfortable bells, unfortunately not only of past, but also present injustices.

Snowpiercer’s tail is home to the poorest, dirtiest, and of degrading health, fed with black moldy scraps and continuously exploited by the privileged front. The organization and distribution of power here is reminiscent of a militarized concentration camp, the psychological situation somehow nearing Stockholm syndrome, where the captives are taught to accept the oppression and fear freedom, because, supposedly, it can kill them (the temperatures outside the train are said to be lethal). Tired of the seemingly endless ordeal, the rebels, played by Chris Evans, Jamie Bell, and John Hurt, are scheming to overtake the Eternal Engine, guarded by the Master and Commander of the whole enterprise, Wilford (Ed Harris), a figure embodying features of a Godly figure combined with Big Brother’s omnipotence and investigative abilities. Wilford’s status is contradictory, as he’s at the same time the guardian of the last stronghold of humanity and president of the most cruel embodiment of tyranny at the same time. Before the rebels take the steering over, they need to fight and trick their way to the train’s nose, where each of the compartments reveals itself as a separate, fully functional micro-universe. Their guardian, mysterious key-holder, is Namgoong Minsu (Kang-ho Song) accompanied by silent Yona (Ah-sung Ko), who seems to be harboring some terrible secret.

Snowpiercer is an American production executed in a Czech Barrandov studio, based on a French graphic novel (Le Transperceneige), helmed by a South-Korean director, and with an international cast. Yet despite its superficially eclectic nature, it delivers a surprisingly consistent and complete vision. A more inquisitive viewer will, however, notice certain compromises and discrepancies like fight scenes that have been weirdly toned down to meet the appropriate rating, while graphic language remains. These attempts to Americanize Joon-ho Bong’s first English-language directorial attempt cause slight disorientation at times, but overall doesn’t affect his astounding ability to seamlessly and coherently piece together classic sci-fi, socially oriented drama, and dark humor.

What also remains is an appreciation of elaborate, thoughtful art direction – the film’s clean and not overcrowded with scenographic hints. The overbearing whiteness of the outside allows us to appreciate the watchmaker’s precision of the intricate construction of the train’s “gut.” Snowpiercer has organic, powerful rhythm and memorable, juicy supporting characters. Tilda Swinton once again hides underneath thick layers of uglifying makeup and crazy teeth, infusing the story with much-needed element of grotesquerie. This eccentric journey has everything more ambitious entertainment seekers crave – there’s mystery, substance, catchy dialogues, vision, and yet again from Joon-ho Bong, a delightful, no-holds-barred game that reaches way beyond the Snowpiercer’s strategically laid tracks.