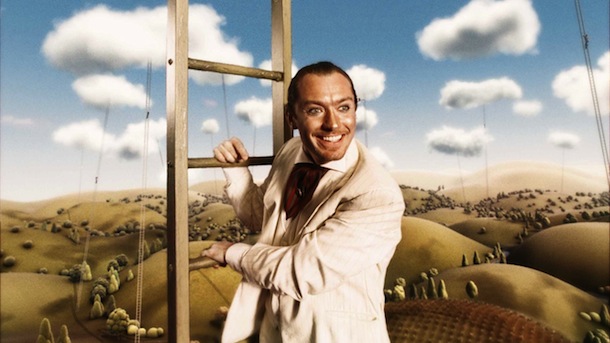 It wouldn’t be a Terry Gilliam film if something didn’t go catastrophically wrong, but 2009’s The Imaginarium of Doctor Parnassus stands out even among the tales of mercenary studio involvement, production setbacks, even outright canceled projects for the more intimate tragedy of Heath Ledger’s untimely death during production. However hard Gilliam took the news, a faint “Of course” must have filtered through his head at some point as he found himself, once again, scrambling to fix some disaster.

Even with the considerable setback, however, The Imaginarium of Doctor Parnassus not only emerges one of Gilliam’s better films, but a surprisingly touching send-off to the dearly departed actor that enlists the aid of his peers to both fill in for him and pay their respects. Ledger’s face shifts into Jude Law’s, or Johnny Depp’s, or Colin Farrell’s when he disappears into the film’s dream world, a practical necessity but one that also reflects how even the beautiful sometimes want to be someone else (or how others can idealize those who already seem to otherworldly).

Ledger’s character, Tony, comes into the rest of the plot by chance, when he is discovered hanging off a bridge by the roving caravan of the good Doctor Parnassus (Christopher Plummer), a man who claims to be thousands of years old and puts on a dilapidated sideshow act in, literally, the theatre of his mind. Attentive audiences are spare, and Parnassus himself is distracted by vague concerns about his almost-16-year-old daughter (Lily Cole) and a disruptive fellow who may or may not be Satan (Tom Waits, who steals the show as a devil who loves playing games with people more than actually winning them).

Admittedly, Doctor Parnassus is overstuffed, with Faustian bargains, teenage angst, criminal intrigue, possibly offensive treatment of little people and more. Nevertheless, its dense-yet-airy machinations fade away when the film disappears into Parnassus’ headspace, opening up a realm of treacly CGI that, like the rush to manage Ledger’s death, makes the most of production circumstances. Sure, the glossy, shiny objects and (MS) painterly backdrops stick out like a sore thumb in the same year Avatar came out, but the animation has more soul than the increasingly photo-realistic (and thus increasingly uncanny) CG that dots other films. Gilliam’s own background as an animator, not of fluid movement but the harsh scraps and collisions of his cut-up surrealism, finally gets its proper digital-age update, his candy-coated realms both sensuous and deliberately artificial.

Gilliam heightens that distancing artifice with by subversively casting his CG setpieces as the product of too little imagination, not a fount of the stuff. What gets illuminated in the fantasies of those who enter the imaginarium is invariably consumerist and greedy, whether it be posh ladies entering lands filled with giant shoes or the literalized vision of Tony as a social climber. There is even an amusingly dark joke wherein some mobsters who slip into the act are lured by an image of police officers tempting these crooks to the side of good with the promise of legally sanctioned beatings and oppression. If Parnassus does not equal the heights of films like Brazil and The Adventures of Baron Munchausen, it nevertheless shows a great director starting to find his feet again, as well as a dynamic demonstration of making lemonade from lemons.