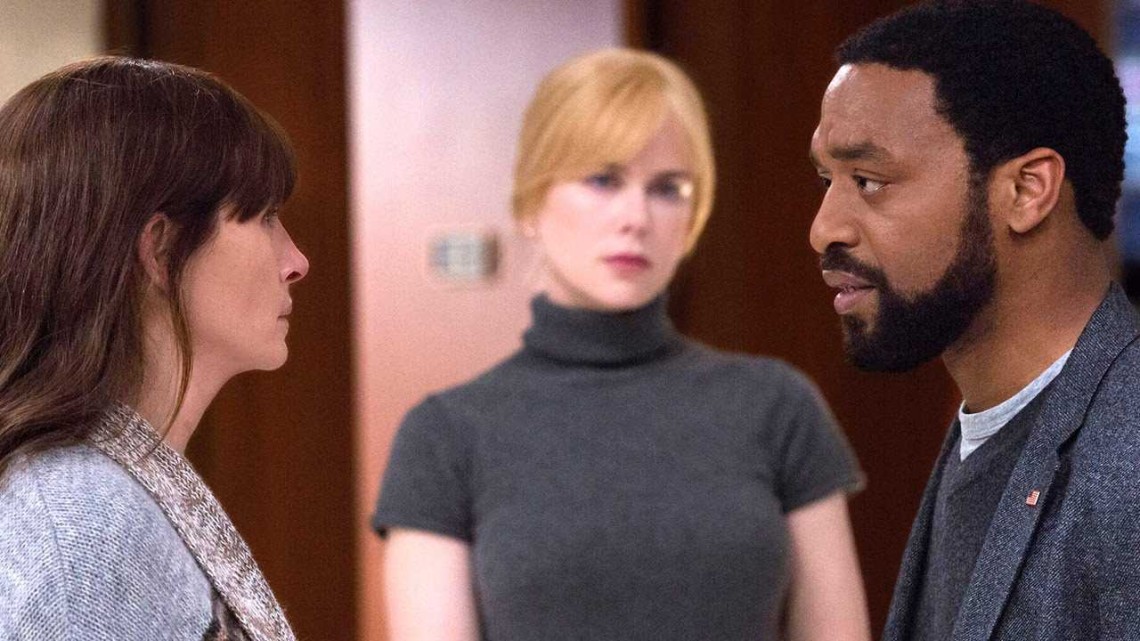 The “Secret In Their Eyes” Is That This Movie Is Ludicrous

Secret In Their Eyes is an American remake of the Oscar-winning Argentinian thriller The Secret in Their Eyes. Writer-director Billy Ray’s version drops the word “the” from its title but retains much of its predecessor’s plot. The film’s politics also get an American upgrade; Argentina’s Dirty War has been replaced with post-9/11 terrorism fears in Los Angeles. While exploring the film’s central murder mystery, Ray bats his characters back and forth between present and past, yet most of the actors play their roles as if no time has passed whatsoever. One could argue that this is the point, but intentional or not, it provides little tension or interest.

The plot is one of those twisty mysteries that usually play better on the Lifetime Network or as an old ABC Movie of the Week. Ray (Chiwetel Ejiofor) is a former FBI agent who has spent the last 13 years searching for the suspect who brutally raped and murdered the daughter of his partner, Jess (Julia Roberts). Ray has also spent those years openly carried a torch for his boss, Claire (Nicole Kidman). Neither has yielded any positive results until the day Ray discovers that his suspect has spent the last 13 years behind bars and is being released. Ray visits Claire (now the district attorney) to tell her the good news, which he also shares with Jess. After years of false alarms regarding her daughter’s case, Jess remains skeptical and wants no part of this new investigation. But Ray is obsessed with clearing his conscience for indirectly putting the victim in danger, so Jess and Claire acquiesce.

The back-and-forth time frame is meant to be clever and seamless, but it’s actually quite annoying. It serves no purpose, because never once did I believe that the passage of time affected the characters. Anguish of this sort matures and becomes a deep-rooted mark on one’s psyche after 13 years, but there is nothing to psychologically mark that these characters have been suffering. The performances are so similar in both time frames that I had to rely on Ejiofor’s subtle salt-and-pepper hair coloring to determine where I was in the story. The entire movie could have taken place in the same year, but of course, that would ruin the dopey plot twists it has in store for us.

With the new post-9/11 terror threat plotline, the plot surprises imported from the original cease to make any sense. The suspect in question is so important to Ray’s mosque surveillance case that his boss (a slimy Alfred Molina) is willing to break all manner of laws to keep the suspect safe. Yet the suspect mysteriously disappears a week later and nobody cares besides Ray? I know that in mysteries like this, some suspension of disbelief is required, but that’s usually earned by good performances or brisk pacing, neither of which Secret in Their Eyes has to offer.

There are gifted actors in this movie, actors who can superbly channel emotions both subtle and grandiose. Yet the lead performances are all terrible. (Dean Norris, in a supporting role, is quite good, however.) Ejiofor, an actor who emotionally destroyed me with one glance in 12 Years a Slave, can’t find footing in either of Ray’s obsessions. He has no chemistry with Kidman, despite the fact that the cinematographer lights her beauty to the point of angelic parody. Their scenes of longing are awkward for the wrong reasons; this middle-aged man seems terrified of her, like a high school student fearing seduction by his teacher. He also underplays the numerous shocks Secret In Their Eyes throws at him, leading to a final scene that is as unsatisfying as it is ludicrous.

Despite being a powerful district attorney, Kidman’s Claire is reduced to the role of “Foxy Lady Lawyer.” Her big interrogation scene, where she uses her beauty to coerce a dick-revealing confession from her suspect, belongs in a Paul Verhoeven movie. Since the love story between her and Ray is devoid of passion and completely unrequited, she has little to do plot-wise or performance-wise. A scene where her husband practically gives Ray permission to run off with her made me feel embarrassed for the actress.

As seen in the somewhat misleading commercials, Julia Roberts has the biggest, juiciest role to play. She’s the catalyst for the past and present plotlines, and her situation allows her to go big and to speechify. She’s effective in the big scene where her daughter’s body is found, but when placed with either Kidman or Ejiofor, she looks through both of them as if they weren’t there. Plus, her raggedy appearance screams out the equation “Beautiful Actress + Ugly Makeup Job = OSCAR!” Her look and demeanor doesn’t change, either—she’s as beat down pre-murder as she is 13 years later, a point Ray mentions in an incredibly cruel line of dialogue. Jess and Ray get the film’s final scenes, and had there been any acknowledgement of presence between either actor before this point, the ending may have been a bit easier to swallow.

I wasn’t a fan of the original film, but at least it made some semblance of sense and was decently acted. Neither of those fates befall Secret in Their Eyes.