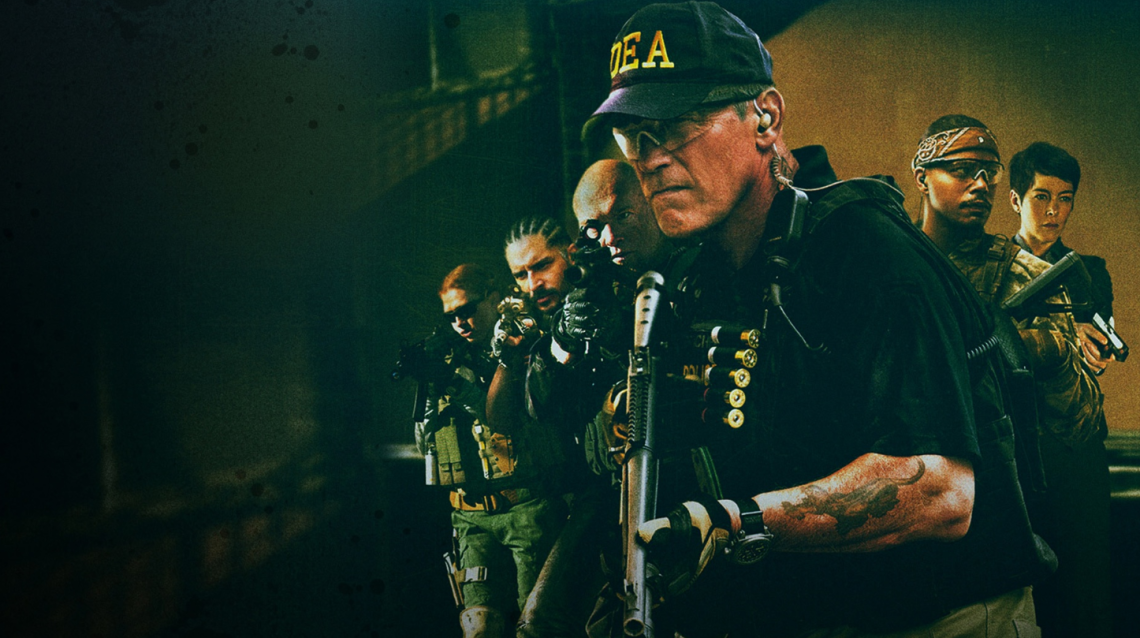 “Sabotage”: A Promising Return to Form For Arnold Schwarzenegger

Sabotage begins with low-fi footage of a woman in close-up being tortured as she wails for help that will never come, and it never gets any more pleasant from there. Following in the wake of End of Watch, the film only deepens co-writer/director David Ayer’s commitment to increasingly gruesome mangling of law enforcement tropes. But Ayer’s last movie established the quotidian routines of cops to make its final-act shootout (the expected result of most cop action movies) all the more shocking and repellent, while Sabotage wastes no time sinking into a mire of blood and backstabbing. Its crooked DEA agents lay waste to cartel soldiers and, after they skim a few million from a money stash that subsequently go missing, find themselves hunted by unknown assailants who could be any number of vengeful drug organizations, or maybe even someone among their ranks.

Law movies regularly play out by focusing on the dogged local enforcer who must at some point unwillingly cede authority, however brief, to some cocky, ludicrously overqualified federal official or team. The principal characters of Sabotage are that federal force regularly ignoring the feeble protests of local jurisdictions, yet in shifting focus onto them, the film does not paint them as heroes. If anything, the extended look at these decorated agents, who walk in slow, deliberate gaits to give their reputation an adequate head start to precede them wherever they go, only makes them harder to tolerate.

Years of undercover work infiltrating cartels have left Lizzy (Mireille Enos) strung out on all the drugs she had to consume to keep suspicions at bay, leaving her erratic and uninhibited, which in turn makes squad mate and husband “Monster” (Sam Worthington) alternately boastful and resentful of being made a cuckold in the line of duty. The rest of the team (Terrence Howard, Joe Manganiello, Josh Holloway, Max Martini) act as a bunch of children high on their own sense of immortality. Their volatile natures are compounded by the lingering heat they received internally over the missing money from their bust, the agents simultaneously bonded and rent apart by interrogation and suspension. By the time leader John “Breacher” Wharton (Arnold Schwarzenegger) gets everyone cleared and returns to them, he arrives as a prodigal father, loved by his children but also resented by them for his involuntary abandonment.

And this isn’t even getting into the film’s myriad twists and turns, many of which, frankly, come off as transparent red herrings that distract from the more rewarding time spent watching the agents growing more and more paranoid as comrades are not simply killed but turned into quivering masses of flesh. But that narrative structure, at once overcomplicated and streamlined through sheer force of forward momentum, matches with its aesthetic construction. The opening bust is filmed in tightly composed, rapid-fire shots that nonetheless give a solid sense of space as the squad moves through the safehouse. The speed of the editing, with each shot lasting about as long as it takes as one of the agents lining up a shot of their own, speaks to the team’s professionalism, but like the compound sequence of Zero Dark Thirty, the thrill of seeing a scene unfold as fast and well-honed as the operation it documents is complicated, then undone by seeing the net effect of this carnage.

Elsewhere, that same rhythm keeps the tension up during moments of downtime, no longer matching the oiled human machine of death but their splintering loyalties and fears, and the sense among the ever-dwindling group of specialists that they may finally be facing something they cannot stop. Generally speaking, the average shot length of this film may be longer than that of End of Watch, but that film had a lugubriousness coded into its perfunctory patrolling that Sabotage trims away with shots that last long enough to study a situation or the aftermath of one without dawdling on its pulped corpses and blood-stained walls. (And it must be noted that, as CG blood has become de rigeur to reduce resetting for takes, Sabotage not only sticks to squibs but loads them with as much fake blood as they can hold.) 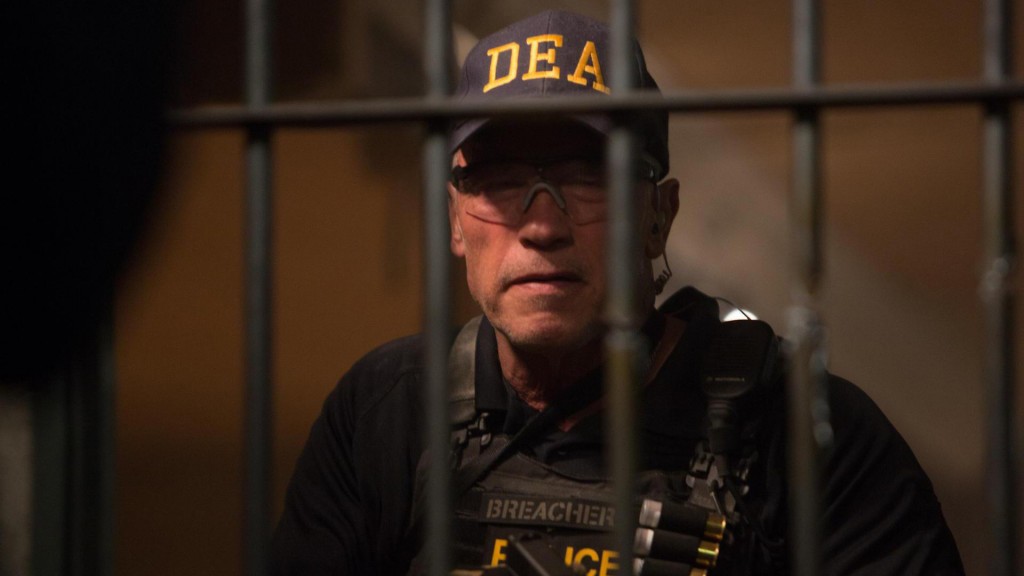 If Ayer’s recent films put their emphasis on deliriously assembled carnage like this, they also offer unexpectedly thorough acting showcases for central roles. Olivia Williams shows up as homicide investigator Caroline Brentwood who, in any other film, would be the lead in the aforementioned struggle between righteous, local law enforcement and arrogant, dirty feds. Admittedly, she leans on a Jaw-gia accent more heavily than any of the actual Atlanta police officers who fill space in the background of precinct shots; at one point, she playfully teases co-worker Jackson (Harold Perrineau) of “makin’ cow eyes” at someone when the only time she likely encounters cows is driving down a state road from her metro ranch to get to I-75.

But Williams has always had an intense strength of will in her, with a jaw that, when clenched, could bore through stone, and over-the-shoulder shots of Breacher “looming” over Caroline honestly portray just how close Williams is to Schwarzenegger’s height instead of making the man seem gargantuanly taller, slightly mitigating his otherwise intimidating presence. Enos is also a standout: she plays Lizzy’s “just one of the guys” raunchiness with such gusto that one can easily miss the subtle cues she drops about her true feelings concerning what an undercover agent of her gender has to face.

But this is, of course, a Schwarzenegger vehicle, and more than that, it is the first film of the star’s comeback to feel as if it truly qualifies as such. Recently, Schwarzenegger appears on The Tonight Show in a skit spouting off his classic one-liners. As with all of Jimmy Fallon’s celebrity goofs, it comes ready made for viral sharing, yet in execution the skit seemed redundant when placed against the greatest-hits reels that are his appearances in the Expendables movies, or even the more appropriately postmodern The Last Stand. Sabotage showcases Arnold in a way no film has since True Lies.

When he stepped out of acting to govern, Schwarzenegger walked away when he was reaching an age that could open up more multifaceted, human roles, and close-ups of his face here, lined with a dusting of white stubble and slackened by loosened skin hanging off of a still-fit frame, communicate not only physical but emotional weariness. That somber, angry edge powers a role that lets the actor dig into his darker side: his interactions with Williams bring out a capacity for psychological warfare not seen since Pumping Iron caught it in scenes of him masterfully messing with his competitors’ heads.

Sabotage ultimately reinforces Schwarzenegger’s iconic image, especially in a coda that looks upon the actor with such unreserved awe it nearly plays like one of Danny’s Jack Slater daydreams deleted from the final cut of Last Action Hero. To get to that point, however, the film acknowledges the bruising and natural fading that starlight has taken, trading the continual recapitulation of Arnold’s brand in other movies with the opening of new possibilities as he settles back into Hollywood. People have been signing lucrative paychecks over to Schwarzenegger to say “I’ll be back” for years. With Sabotage, he’s finally returned.

One thought on ““Sabotage”: A Promising Return to Form For Arnold Schwarzenegger”