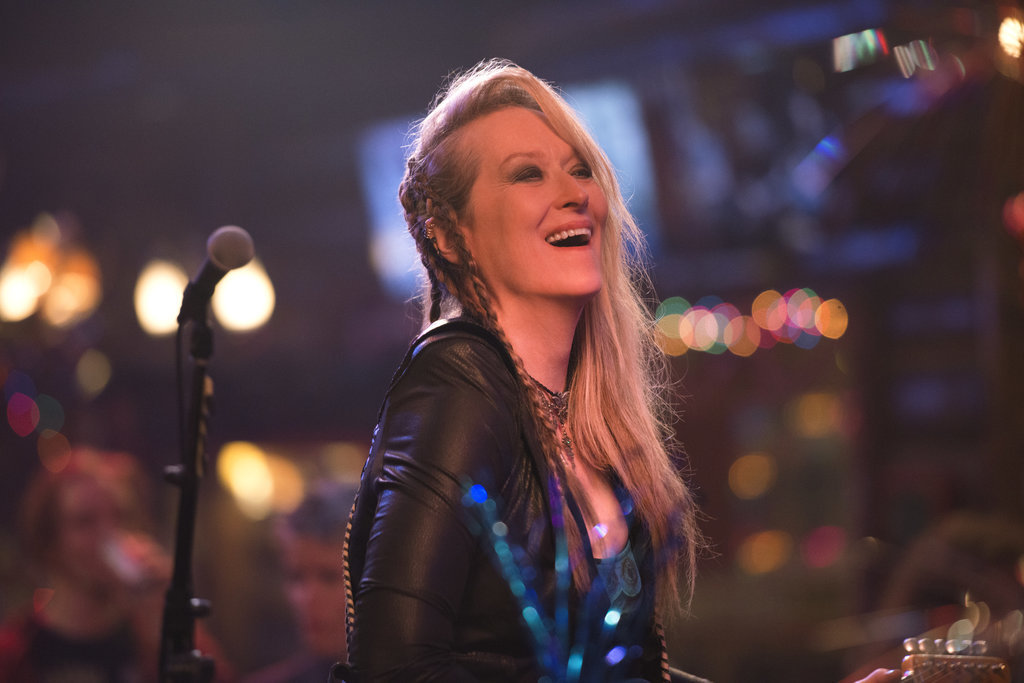 “Ricki and the Flash” Is Recognizable, But Charming

In some ways, we’ve seen Ricki and the Flash before. With its focus on a broken family and a lengthy final sequence set at a wedding, Jonathan Demme’s latest picture sounds a lot like his 2008 feature Rachel Getting Married. Yet, by virtue of the heartfelt strength of Demme’s humanist vision, the déjà vu his new film often evokes isn’t as much of a drawback as it could have been.

Not that Ricki and the Flash is a full-on carbon copy of that earlier film. This time, Demme is working from a screenplay by Diablo Cody, and those who still remember (fondly or otherwise) the mix of comedy and drama she managed in her Oscar-winning debut script Juno will have an idea how this one plays compared to the more serious bent of Jenny Lumet’s screenplay for Rachel Getting Married. (Thankfully, over the years, Cody seems to have learned how to dial down her precious side; in Ricki and the Flash, even her snarkiest lines generally serve the characterizations rather than calling undue attention to their own supposed cleverness.) And the titular Ricki, aka Linda Brummel (Meryl Streep)—an aging rock musician who left her family long ago to pursue dreams of stardom that never quite panned out—has a different set of neuroses from the younger and more anguished Kym in Rachel Getting Married. Still, even some of the director’s grace notes feel like rehashes of the earlier film: the two wives who are African-American (Anna Deavere Smith in Rachel, Audra McDonald here), for instance; and the casting of former rock stars and musicians in supporting roles. At times, it feels as if Demme is trying to post signs evoking the multicultural and multigenerational vision of the earlier film within a context that doesn’t entirely support it (Cody’s strain of anti-establishment snark in Ricki and the Flash is pretty foreign to the tone established in Rachel Getting Married).

And yet… Has there been a more heartening environment to bask in than the cinema of Jonathan Demme? A world in which individuals are seen with the most welcoming yet clear-eyed of gazes, their flaws recognized but accepted without judgment? A world in which music has the power to unite, to express emotions in lieu of words, to simply express the joy of performance? This has been Demme’s worldview ever since the empathetic screwball stylings of his 1977 comedy Handle With Care, all the way through Melvin and Howard’s warm-hearted historical speculation, Stop Making Sense’s musical utopia, and Something Wild’s road-movie exploration of forbidden desires. After a decade and a half or so dabbling in more commercial fare (The Silence of the Lambs, Philadelphia, his 2004 Manchurian Candidate remake) and grandly ambitious but commercially unsuccessful passion projects (Beloved), Demme has taken to a kind of clearing of the decks with Rachel Getting Married and now Ricki and the Flash, and the results show a refreshed commitment to his humanism.

If Ricki and the Flash adds anything new to Demme’s auteurist perspective, it lies in an increased awareness of the inevitable pain that comes with aging. This awareness is evident perhaps most of all in Meryl Streep’s tricky central performance. At first, one might find her overly mannered in her lightly wacked-out line deliveries and swooping gait—a classic case of this ever-fascinating actress allowing technique to overwhelm pure instinct. Gradually, though, one realizes that, to some extent, Ricki is putting on something of a front for the rest of her former family: trying to play the rebellious rock star that she never quite became. As she begins to reconnect with her family—especially with daughter Julie (Mamie Gummer), whose current post-breakup rough patch helps bring Ricki back into her life—the character’s mask gradually drifts away, and Streep allows moments of poignant authenticity to peak through: in an anguished phone call to current boyfriend/fellow guitarist Greg (Rick Springfield), in a private crying jag after an annihilating argument with Maureen, in a meltdown during a live performance in which Ricki exposes her regret and self-loathing to the public.

But then—during a performance of “Drift Away” that Ricki and the Flash perform at their usual Tarzana, Calif., bar—comes a moment that, even more than the film’s concluding wedding sequence, crystallizes the emotional generosity of Demme’s vision. What begins as just another cover performance of the type that Ricki and her band has become all too used to in the past few years suddenly—as a result of a selfless act of charity on Greg’s part that he reveals to Ricki only by implication—suddenly becomes both an expression of love through music-making and renewal of an artist’s creative juices, with Ricki finding new meaning in the lyrics of a song she has long known. Even if Ricki never fulfilled her dream of rock stardom, Demme seems to suggest, such long-term disappointments surely shouldn’t detract from the momentary pleasures of remaining alive to rock on in the first place. Ricki and the Flash may not be among Jonathan Demme’s greatest films, but may he continue to rock on in his own way for as long as he wishes.