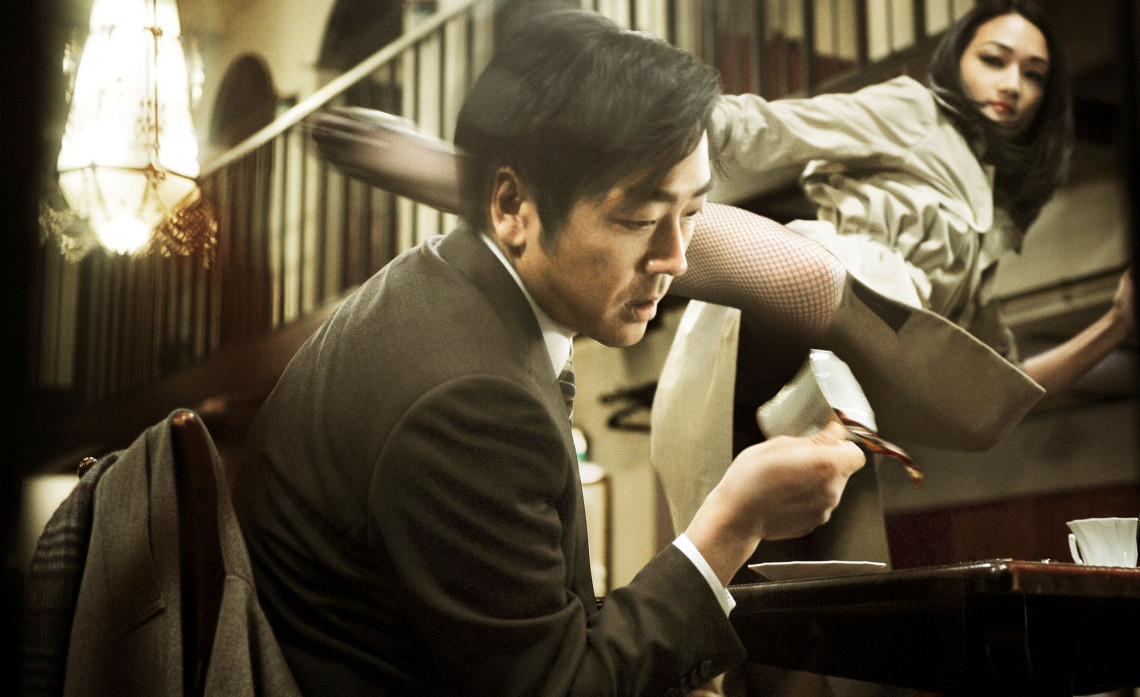 In R100, Takafumi Katayama (Nao Ōmori), a workaholic father burdened by loneliness over his wife’s catatonic state, decides to sign up for a one-year contract with a gentleman’s bondage club. Membership comes with a few decidedly inconvenient stipulations; most notably, he must live all 365 days in constant anxiety over where, and when, he might be ambushed—in his home, at his job, on the street, at a restaurant—by the beautiful dominatrices the club employs, each of whom possesses a talent for humiliation and debasement. What follows is a marathon of awkward sexscapades and unconventional personal liberation.

Director/co-writer Hitoshi Matsumoto is perhaps best known for directing 2007’s Big Man Japan, a farcical take on ultra-kaiju fare like Ultraman. In that film, Matsumoto interrogated the tropes and structure of its genre through sharp satire and unimpeded collateral damage. In R100, he sets his sights on a post-Fukushima Japan, weaving a complex metaphor of human alienation in the terrible aftermath of that 2011 disaster. Urban paranoia hangs over every scene, and looming fear of nuclear catastrophe lurks around every corner.

But Matsumoto uses national atmosphere as window dressing; R100 is primarily a parade of kink, topped off with explicit allegory for pushing subversive art past prudes. Matsumoto occasionally inserts himself into the story, staging a dialogue between squeamish censors and the nervous assistants to an ancient, bearded Matsumoto surrogate. The results are more salient than they have any right being; the censorship metaphor may be unnecessary, if only because there’s no reason for the balls-to-the-wall film to make such a goddamn scene of itself. But needed or not, it’s a blip on R100’s warped radar. Matsumoto wades in the deepest waters of weirdness, reveling in every second of abuse Takafumi endures from one scene to the next—a whipping here, a harmless dunking there, and a salvo of saliva everywhere. How enthusiastically viewers take to these hilariously deranged sexual escalations depends on their tolerance for unbound carnality.

R100 doesn’t have very many contemporary precedents; it relates to reality as loosely as any Takashi Miike joint, yet Matsumoto doesn’t aim for grotesque violence as much as surrealism. The film begins as Takafumi takes a boot heel to the face before being kicked down a flight of stairs by the first of his leather-bound mistresses; his eyes go black as pitch while ripple waves of euphoria pulse around his face. It’s the release he’s been looking for since his spouse fell into a coma. Being a single dad can be tough in a cold and unforgiving world, and if Katayama needs to let his freak flag fly to find a little respite from the difficulties of daily life, more power to him. Sexual positivity is R100’s most essential theme but, frankly, the movie is such a deliriously wacky sensory experiment that musing over metaphor misses the point. Matsumoto’s film has to be experienced to be fully understood.

If, of course, it can be understood. R100’s title is the best example of Matsumoto’s cheekiness; it’s a play on Eirin, Japan’s movie rating regulator, which taken literally restricts ticket sales to consumers a hundred years old and over. More importantly, we’re told that only consumers a hundred years in age can comprehend the film, though in a moment of self-parody, no explanation as to why is given. (Tune back into Movie Mezzanine in 2085 when we revisit R100 from centenarian perspectives.) But audiences just need to be partially in touch with their inner deviant to make odds or ends of Matsumoto’s ideas about the cathartic value of human sexuality. A healthy appreciation for twisted humor doesn’t hurt, either.