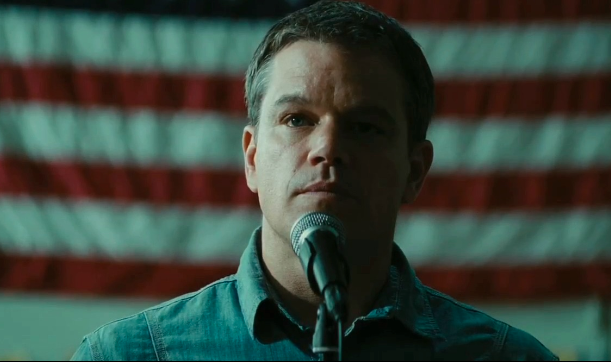 It would be unfair to Milk to say that Gus Van Sant returns to its realm of soft-peddled liberal pablum with Promised Land. Much as the director’s biopic of Harvey Milk seemed tailor-made for the socially liberal, artistically conservative mindset of the Academy, its moral outrage was not blunted by Hollywood’s typical method of framing prejudice as a relic of an ignorant past instead of an enduring aspect of an ignorant present. (See: nearly any studio picture dealing with race made in the last two decades.) When Van Sant and writer Dustin lance Black arrived at Dan White’s infamous “Twinkie Defense,” a palpable disgust for him and those who continue to speak homophobic speech and practice homophobic violence rippled through the celluloid.

Promised Land has no such moment of unbridled passion. It hits its beats with the unrelenting tedium of someone who simply will not let you leave until you take a flier. Dustin Lance Black saw Dan White in everyone who ever took issue with his sexuality, but Matt Damon and John Krasinski (working from a story by, heaven help us, Dave Eggers) see people who would surely think as they do if only they were just a bit more educated. That line of thinking, and all its attendant condescension, seeps into Van Sant’s film like fracking chemicals into the water supply.

The problems manifest early, as Steve Butler (Damon) and Sue Thomason (Frances McDormand), representatives for a natural gas company, arrive in their newest small-town target, tasked with convincing everyone in town to sell their land for a fast buck to open up billions of dollars worth of gas. Steve and Sue immediately set to trading their business formal clothes for flannel and boots and Sue gets the rattiest, emphatically American truck she can find for their rental. But when Sue walks up to the counter of the general store, their cynical ploy falters in the face of the shopkeep (Titus Welliver), who speaks to Sue as if he were the film’s writer, breaking down her carefully composed behavior with homespun wisdom and analysis.

The rest of the film follows from this moment, in which townspeople are as podunk or shrewd as the script requires them to be. They can be so stupid that Steve could probably get them to sign over their land for a buffalo nickel and a can of Spam, only to turn around and use Google to investigate the side effects of fracking, as well as pending legal cases facing Steve and Sue’s company. Most of the town’s resistance is focused into Hal Holbrook, who works double-time as the town’s hidden genius and its moral center. His speeches are every bit as artificial and scripted as Damon’s misguided, exploitative pitches for “helping” people by drilling their land, but they are presented as if Lincoln’s lost addresses, rousing moments of truth to power. In reality, he sounds more like the old German man propped up against Loki in The Avengers, an embarrassing add-on inserted only as an insulting sop to the audience.

Then again, it is hardly surprising that the dialogue uses such moralizing shorthand when the narrative arc and mise-en-scène follow suit. Weak juxtapositions routinely pit quaint, rustic life with the soulless corporate plod of Steve and Sue’s existences. Case in point: the endless shots of parents in town spending quality time with loving children, while Sue has to have spatially and emotionally distant conversations with her son by phone or Skype. A muted color palette hammers home the dreary desperation of rust-belt America, and Van Sant can never go too long without some pillow shots of dilapidation. The facelessness of the gas company is emphasized in its name, Global Crosspower Solutions (which reminded me of Globo-Chem, a much better name for a multinational gas company but one, sadly, already claimed as the satirical stand-in for corporate power in the HBO series Mr. Show).

The film briefly picks up, however, when Steve’s struggling sales pitch is further set back by the introduction of an environmentalist named Dustin (Krasinski). Where Holbrook’s character is portrayed as unassailably good, Dustin becomes more of a foil for Steve, using the same irritating, manipulative tricks that Steve does. Both try to hook kids so their parents will be friendlier to their messages, and they appear to be genuinely driven by concerns for their own devastated hometowns—Steve’s from the closing of a Caterpillar plant, Dustin’s from fracking—even as they use their backstories as a means of establishing false camaraderie of a community wary of them. Sue constantly reminds Steve that what they do is just a job, and getting to see Dustin employ the same methods, adopt the same nonthreatening but pushy behavior, even chase the same woman (an inexcusably wasted Rosemarie DeWitt), shows the truth in her words. For a brief, shining stretch of time, the film threatens to become more than a smug liberal tract.

And then comes a twist reveal about Dustin’s true nature that recasts the character not as a Bizarro-Steve but as Steve’s logical endpoint if he stays on his current path. It invalidates every intriguing, remotely complex idea for the sake of simplifying polemic. Blurred lines of morality are re-painted and illuminated with reflectors, all to set up one of the most embarrassing, self-defeating green diatribes since Steven Seagal went after Big Oil in On Deadly Ground. If Milk managed to rise above its predictable, award-friendly formula with its viscerally anguished ending, Promised Land hitches a ride on one of its fracking drills to sink miles lower.