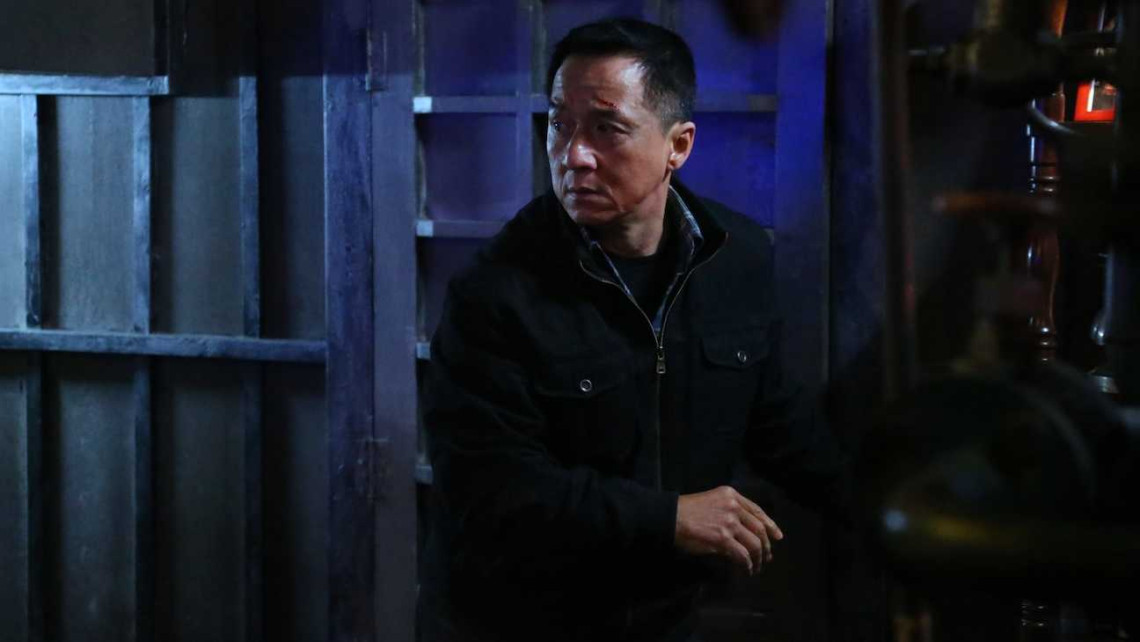 Those expecting Jackie Chan to be a virtuoso of swinging limbs should be warned that Ding Sheng’s new film Police Story: Lockdown isn’t like other martial arts pictures that made Chan a household name. He’s over 60 now, and the high-flying acrobatics that have worn his body down over the decades can’t be expected anymore. To compensate for the transition, Chan is shifting away from his more animated, charismatic self, and taking on a stoic persona for his turn in this film. (Full disclosure: Lockdown‘s relation to Chan’s other Police Story films is in name only.)

Captain Zhong Wen (Jackie Chan) is your typical police officer, completely obsessed with his work and totally ignorant of what goes on with his wife and children at home. Zhong’s commitment to his work drove away his family, but a forthcoming wedding sets the table for a reunion with his daughter, Miaomiao (Jing Tian). This is their first meeting since Miaomiao walked out on her father and the situation already looks dire. Donned in goth makeup and with a sleazy boyfriend in-tow, Miaomiao is clearly aiming to displease her father and Zhong is more than ready to launch into a lecture, but the family drama will have to wait, because Miaomiao’s fiancé has plans of his own. Club owner Wu Jiang (Liu Ye) is already proving to be a nightmare to his potential father-in-law in the short time they’ve met. Unbeknownst to Zhong, Wu has set up a hostage situation that will occupy Zhong for the foreseeable future. No one gets in, no one gets out.

By this point, viewers can already see the similarities to the seminal cop film Die Hard, and the comparisons aren’t flattering. One of the reasons Die Hard has maintained its status as a classic for years is Bruce Willis’ everyman appeal as John McClane. That level of charisma is something Chan has brought to his other pictures, but in forcing him to abandon his biggest strength, the minds behind Lockdown have only done themselves a disservice. Without Chan’s animated personality to distract from questionable storytelling decisions, the rest of the film suffers. Lockdown tries very hard to be a serious film, but when you dabble in the action genre, occasionally you have to feature an action scene. Most Hong Kong pictures are good for three or four jaw-dropping combat sequences, yet Zhong spends almost of his time trapped in the club chatting with Wu. Chan does get to shake off the rust for a bruising battle against Wu’s bodyguard, though even that is focused on bone-crunching injuries instead of awe. The majesty of old Chan martial arts matches just isn’t there.

All of that could be forgiven if so many other elements of the movie weren’t botched. Any tension that could be derived from a hostage negotiation is squandered by constant callbacks to an event involving both Zhong’s wife and Wu’s sister. This is a wasted investment of time because Ding Sheng waits too long to pull the trigger on Wu’s backstory. Any insight into Wu could have made him a more interesting villain, but instead audiences are left with gimmicks and snarling. Confoundingly, Miaomiao, the only reason why Zhong is at the club at all, gets no closure in her dramatic arc. As soon as danger arises, she reverts to being an obedient child and any legitimate understanding that may have come between father and daughter is sacrificed for simplistic moralism. That moment could have revealed a different facet of Jackie Chan, but it was swept under the rug for more stone faced hero cliches.

Police Story: Lockdown was supposed to be a star vehicle, but a vehicle that doesn’t let its star shine is of no use to anyone.