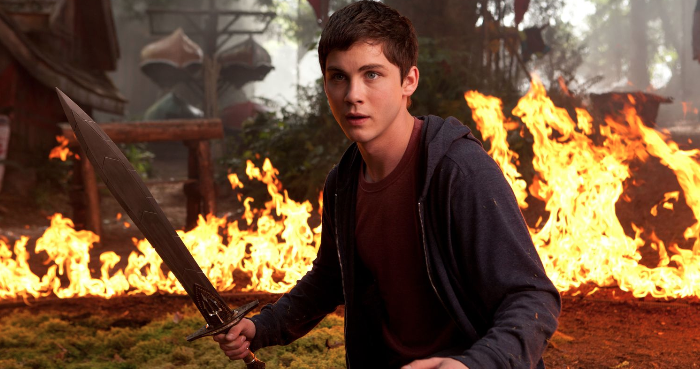 Film adaptations of young adult novels seem like easy targets for critical beatdowns. They’re simplistic, littered with rote characters, broad strokes mythology, an all-encompassing lack of surprise, and an overly-serious tone. Percy Jackson: Sea of Monsters certainly checks off the first three on the list, so its potential impact doesn’t have the highest of ceilings. However, unlike other cinematic YA fare, it thankfully never gets bogged down with taking itself seriously, which elevates it above the rest.

It airily pushes its plot quickly forward, never masking the elements it heavily borrows from other superior books/films, and doles out one-liners that tiptoe around irreverence. Logan Lerman and the rest are undeniably bland, yet they’re sweet, genuine, and funny enough that I can’t imagine hating them. If critics are bullies for young adult movies, Percy Jackson: Sea of Monsters is the potential victim charmingly asking, “Hey, you wouldn’t hit a guy with glasses, would ya?”

Percy Jackson: Sea of Monsters starts off with the lengthy flashback (accompanied by narration!) of Talia, a daughter of Zeus. Half-blood — children of the gods — find refuge and training at a special camp, appropriately called Camp Half-Blood. Plenty of creatures want half-bloods to die, so Talia sacrifices herself when her group of fellow half-blood children are attacked by a cyclops. Zeus is moved by his daughter’s gesture, so he turns her into a magical tree, which forms a barrier around Camp Half-Blood that will only permit half-bloods to pass through.

Flash forward to present day: the malevolent Luke (Jake Abel) has poisoned the Talia Tree, allowing a giant bull to break through and cause chaos. The only way to cure the Talia Tree is to retrieve the Golden Fleece, which resides in the Sea of Monsters, guarded by Polyphemus, another cyclops. Camp Half-Blood sends their champion, Clarisse (Leven Rambin), to retrieve the Fleece… but we know that Percy (Logan Lerman), Annabeth (Alexandra Daddario), and their satyr buddy Grover (Brandon T. Jackson) will find their way into this adventure as well. Luke is also after the Golden Fleece, as he needs it to free Cronos, the Titan destroyer of worlds, in order to make his father, Hermes (Nathan Fillion) pay.

You may find yourself with a multitude of questions. If there was no barrier, how was Camp Half-Blood an even remotely safe refuge? Why wouldn’t Zeus have created a barrier in the first place around this camp? Why does a magical barrier require a tree made of half-blood remains to exist? If the tree could be poisoned, why had no one else tried this in the decade or so that passes? Why is Luke’s solution to his daddy issues to destroy the world — doesn’t he know that Cronos eats his relatives, of which Luke would be included? Or does he know this, as it seems no one really knows anything about any mythology at all, except for Annabeth, the Hermione of the series? Why is it called the Sea of Monsters when there’s only one actual monster in it?

Pay these questions no mind: the movie certainly doesn’t, and frankly, it’s better for it. Every explanation is usually followed by some smartass quip, as if the movie is saying, “We know this is thin, and we don’t care.” I didn’t care much either. I was frankly surprised by how many quips I found funny; here’s a film that casts Nathan Fillion and allows him to make a joke about the early demise of the Joss Whedon TV show Firefly.

The first Percy Jackson film didn’t have this level of irreverence, nor did it have such a buckshot approach to amusement. Plenty of jokes thud, but I vastly prefer this tone to the forced “darkness” of the Twilights, Hunger Games, Beautiful Creatures, and the upcoming Mortal Instruments. When Luke unveils the box containing Cronos to our heroes, he laments how difficult it was to obtain. “I had to crawl through the depths of Tartarus itself… and Cleveland,” he deadpans with flawless timing.

There’s the usual basic character arcs at play: Percy is afraid he won’t live up to his potential, Annabeth is prejudiced against a half-cyclops named Tyson (Douglas Smith), and Clarisse is an insufferable ass (you may recognize Ms. Rambin from The Hunger Games, in which she also played an insufferable ass). Thus, you know Percy will succeed, Annabeth will befriend Tyson, and Clarisse will reluctantly play nice.

Everything is color-by-numbers, all themes kid-tested and mother-approved. The action is mostly bloodless, the visuals are cheap but not uncreative (the visual of Cronos is surprisingly neat), and the cameos by hambone actors are effectively hamboney; Stanley Tucci and Nathan Fillion are always welcome ridiculous scene-stealers. There’s also a Raiders of the Lost Ark homage so blatant that I thought I’d slipped into a parody film of some sort. It’s a welcome moment: a nod of nostalgia in a film that seems like a throwback itself, with its evident effects work, an abundance of one-liners, and a stark commitment to earnest good-natured fun.

Percy Jackson: Sea of Monsters doesn’t present a world with depth or originality… but as far as cinematic adaptations of young adult novels go, it thankfully strikes the right tone. No need to strike this bespectacled goofball.