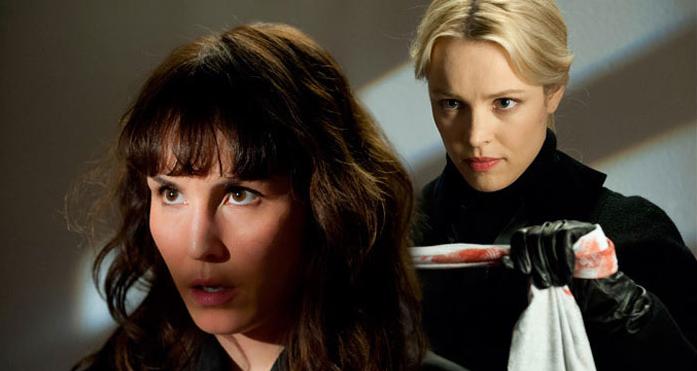 ‘Passion’ Is Silly, Lurid, Not Particularly Good But Very Entertaining

There’s a point a little more than halfway through Brian De Palma’s new film, Passion, where you either have accept where the film is taking you, or walk out. Operating under a screwy, pulpy, no-screenwriting-student-would-dare kind of logic, complete with lesbian mind games and multiple honest-to-god “it was all a dream” plot twists, the film goes from genuinely suspenseful one minute to utterly ludicrous the next – and always with a earnestness that makes it that much more difficult to grasp. One thing’s for certain though: the movie is never dull. And while it’d be generous to call Passion a return to form for De Palma, at least it’s a return to fun.

A remake of Alain Corneau’s Crime d’amour, the film takes place in the Berlin offices of an international ad agency. Ruthless executive Christine (Rachel McAdams) begins a twisted game of sexually charged cat-and-mouse with her colleague Isabelle (Noomi Rapace) in an attempt to slow the latter’s rise up the corporate totem pole while surging ahead herself. Problem is, the seemingly passive Isabelle has a breaking point, and soon bitchiness and backstabbing start to turn bloody.

Frequently, De Palma riffs on the artifice of the highflying ad world – characters lie through their teeth and flirt to get ahead, their expensive clothes and luxuriously furnished apartments doing nothing to hide the dirtiness of the game that they’re engaged in. There’s a decidedly stilted quality to both McAdams and Rapace’s line delivery, particularly in the  early sections of the film. Whether you choose to read it as further commentary on their characters’ shallow natures or just sub-par acting is ultimately up to you.

It’s just at the point that the movie threatens to go from amusingly wooden to just plain flat that De Palma flicks the switch. A sudden pill-binge by one of the characters seems to send the entire film into a drug-induced stupor, and the previously unremarkable mise en scene suddenly spins out into strange angles and long, ominous shadows. As blood begins to flow, reality and nightmares bleed together, merging in a strange, campy netherworld where the rules of competent traditional storytelling no longer seem to apply.

That’s not to say the film is hard to follow, exactly, but rather that the plot is secondary to the delightfully strange and impeccably soapy vibes; the marriage of camp and cheap Euro-eroticism masquerading as serious art.