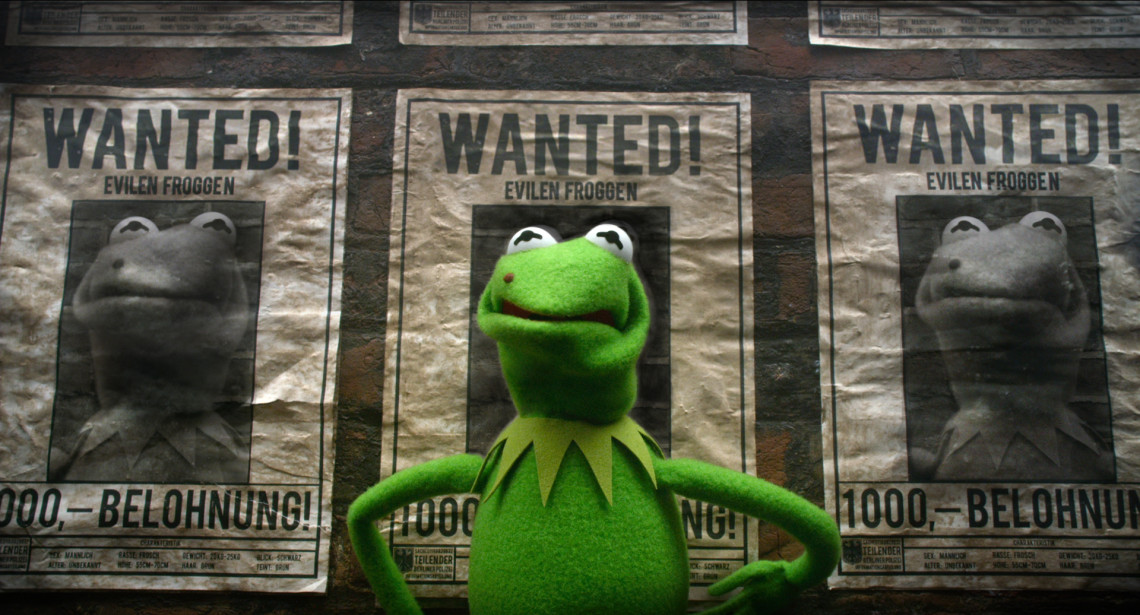 “Muppets Most Wanted”: The Kid-Friendly Version of “Face/Off”

Like The Great Muppet Caper, the follow-up to The Muppet Movie, Muppets Most Wanted  concerns itself with the theft of British jewels. Unlike Caper, Muppets Most Wanted is a lot of fun and a very good movie. It’s a loopy tribute to the anarchy of its titular characters that ends with an appreciation of the one character who’s always trying to maintain order. Though Kermit and company sing the critic-ready line that “a sequel’s never quite as good,” I must respectfully disagree. This may be the Muppets’ best onscreen appearance since Kermit strummed his banjo back in 1979.

Doppelgangers are back in style at the multiplex. While Jake Gyllenhaal and Jesse Eisenberg tackle their twins of terror in Enemy and The Double, Kermit the Frog has a more family-friendly run-in with his evil lookalike. Constantine the Frog bears an uncanny resemblance to the future Mr. Piggy; his slight visual differences are easily hidden and even more easily overlooked. Granted, he sounds like Yakov Smirnoff trying to do a Kermit impression, but nobody seems to notice that; not even Miss Piggy. Thankfully, Muppets Most Wanted sidesteps any icky Face/Off-style carnal possibilities.

For all his evil tendencies, Constantine is actually more romantic than Kermit. More on that later, as it figures in the best scene in Muppets Most Wanted. In the meantime, the Muppets tell us that Disney has thrown this movie together “while they wait for Tom Hanks to do Toy Story 4.” This is followed by a daring prison break by Constantine, who partakes in the most physical action of any Muppet since Yoda went CGI.

Seeking something important to do in this sequel, the Muppets meet with Dominic Badguy (“it’s pronounced Bad-JEE,” says the man who plays him, Ricky Gervais), who convinces them to do a world tour of The Muppet Show. Unbeknownst to our heroes, Dominic is in cahoots with the most dangerous, larcenous frog in the world. Their plan is to pass Constantine off as Kermit, then book the Muppet Show into venues close to the locations Constantine plans to rob. The Muppets will take the fall for the crimes.

While the robberies are complicated, turning Kermit into Constantine is not. In fact, it only takes about 2 seconds. Constantine sticks a fake mole on Kermit, then covers his own mole with makeup. Faster than you can say “involuntary Syndey Carton,” Kermit is whisked off to Siberian gulag while Constantine replaces him on tour.

Tina Fey plays Nadya, Kermit’s Russian jailer. Her accent is as fake as Kermit’s mole but 50 times as charming. Nadya oversees a motley crew of guest stars serving as prisoners, most of whose identities I wouldn’t dream of spoiling. Nadya uses doo-wop and Phil Spector girl group vocals to welcome Kermit to her humble hellhole, while Kermit responds by stating he is not Constantine. As Kermit awaits rescue, he stages famous Broadway musicals featuring the prisoners.

Back at Muppet Labs, nobody but Animal seems to notice that “Kermit” is allowing them to do anything they want. (“BAD FROG!” says Animal before attempting to eat Constantine.) “Kermit” even sides with Badguy, with whom the real Kermit had an antagonistic relationship. It raises nary a red flag until it’s almost too late.

Everyone’s too busy basking in their newfound freedom to pay attention. Gonzo stages an indoor running of the bulls with a famous Mexican star. Dr. Teeth’s set lasts longer than the entire Woodstock concert. Miss Piggy’s singing goes Celine Dion-style bombastic. None of these things would have gotten past the real Kermit. Despite the show being out of control (or more out of control than usual), it receives rave reviews at every venue it plays. 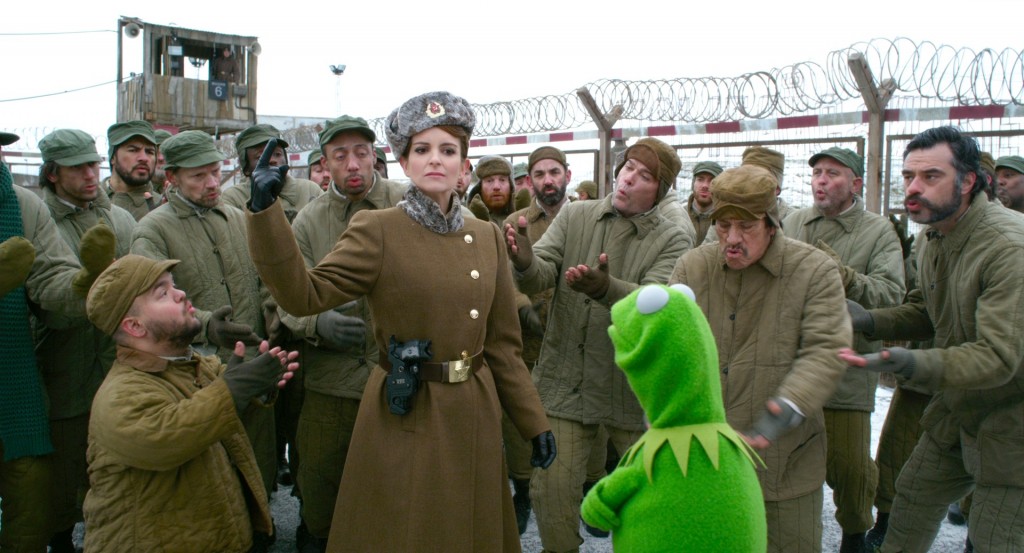 Constantine’s robberies attract the attention of both Interpol and the CIA. The former is represented by French-accented human Inspector Jean Pierre Napoleon (Ty Burrell); the latter by Muppet Sam the Eagle. Sam refers to the Muppets by his usual name for them. “Those freaks the Muppets are behind these robberies!” he tells Napoleon. Napoleon, however, thinks it’s The Lemur, a character who, to our surprise, turns out not to be a Muppet. With these two law enforcers, Muppets Most Wanted pokes gentle yet pointed fun at American exceptionalism and European snobbery.

When Fozzie Bear finally realizes something is rotten in Denmark (or England, actually), he recruits  Walter, the Muppet introduced in 2011’s reboot, and Animal to help him find the real Kermit. Mucho mayhem ensues. As one would expect, the day is saved, the crimes are solved and the movie ends with a joke and a song.

Speaking of songs, Oscar winner Bret McKenzie returns to the series to pen a series of excellent songs in a variety of genres. Fey and Gervais prove surprisingly adept, and the Muppet performers bring their usual brilliance. McKenzie’s most amusing contribution also gives Muppets Most Wanted its best scene: to keep up his ruse, Constantine has to soothe Miss Piggy’s wounded romantic ego. He does so with a throwback to the romantic disco/R&B songs of the 70’s. Paying homage to the soft focus of both The Story of O and Lucille Ball’s version of Mame, Constantine literally puts Vaseline on the camera as he sings.

Director James Bobin and his cowriter, Nicholas Stoller also return to the series and, true to sequel form, create a bigger, louder and more ridiculous movie. There are weddings, prison breaks, fights in crammed places like helicopters, more stars than there are in the Heavens and riffs on everything from Ingmar Bergman to overpriced Las Vegas shows. The filmmakers are gloriously self-aware, but still manage to provide some emotional heft to the proceedings.

Kermit is genuinely hurt when his friends don’t notice he’s gone missing, and even more hurt when he finds out why. Muppets Most Wanted pauses for these moments, and the ones that rectify them. It reminds us that what makes these characters great is the notion that underneath their non-human appearances lay very real human emotions. I hadn’t truly felt that since Jim Henson first put his characters on the screen in The Muppet Movie.

Despite the somewhat valid criticism that there’s a little less Kermit than Muppet fans desire, I enjoyed Muppets Most Wanted immensely. I expect that the third film in this series will send the Muppets back to take Manhattan. I’ll be waiting for them on the corner of 42nd and 8th.

One thought on ““Muppets Most Wanted”: The Kid-Friendly Version of “Face/Off””