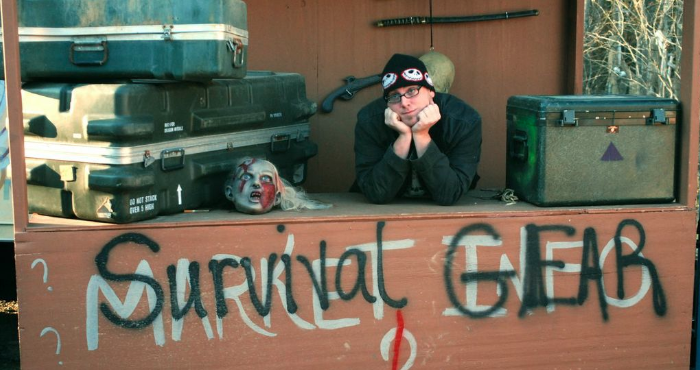 ‘Monsters Wanted’ is Too Dull of a Ride

Haunted houses have always fascinated me and I adored visiting them as a kid: there was something great about the mere idea of a ride that literally took you to a different world. I can still remember the first haunted house built in an amusement park near my hometown circa 1990. Communism had just fallen and my native Poland was eager to catch up with the West, even if we lacked the means and know-how to do so.

The ride I took (in what is still called the”Merry Little Town” in Chorzów) was a rickety, raggedy affair. It took about a minute or less, the monster puppets looked like someone had just scared them to death and the fake cobwebs reeked of rubber so badly you felt like freeing the foam tarantulas that inhabited them. It was then and there that the 8-year-old me understood the meaning of “production values” – by means of their utter absence.

Rich Teachout, the main character in a new documentary film by Brian Cunningham and Joe Laughrey, has never built a shabby haunted house in his life. He is a perfectionist with a movie director-like sensibility, treating his rides like full-blown productions and making them as spectacular and scary as possible. He quit his lucrative day job in pursuit of a dream (or was it a nightmare?) of establishing the Asylum Haunted Scream Park in Louisville, KY – and he pulled it off. Monsters Wanted documents his dogged effort to build what he calls Zombie City: the ultimate terrifying ride. His project requires complicated feats of engineering, carpentry, logistics and casting – it’s conceived as an interactive immersion in gory make-believe. Herschell Gordon Lewis meets Walt Disney.

I found Monsters Wanted well-made, but only moderately informative – and mostly lacking in spirit. For a movie that focuses on a bunch of nerds who genuinely love what they do (as well as risk their financial security in order to continue doing it), the film feels much too uninterested in exploring what makes them all tick. We learn that Rich and his business (as well as life-) partner Janel have put all their life savings into the creation of their new ride and we get to witness their growing exhaustion as well as unshakable commitment – but we never get to know them as people.

Their histories and backgrounds are all but absent; they aren’t even allowed to talk at length about what is it exactly that draws them to gore and horror so much. The film merely touches upon those issues while the viewer is left hanging, with a dozen questions on her or his mind that never get posed. Janel, who is rarely seen without her Tim Burtonesque hand puppet, admits to having seen Poltergeist at three and “pawing at the TV” in hope to share the faith of the little girl in the movie. That’s the single most heartfelt and funny confession in the movie — and it comes even before the opening credits roll.

Further source of disappointment is the scarcity of detail we learn about the ride itself. What exactly is Zombie City…? How is it conceived in terms of suspense, geography and narrative progression? We get bits and pieces, the best of which is the appearance of Pete, the burly actor playing a blood-covered chainsaw-happy sicko, but we never acquire the sense of Zombie City as an integral vision (which it no doubt it is in real life).

Contrary to some truly successful movies focused on the creative process – like D.A. Pennebaker’s Company: Original Cast Album – Monsters Wanted is obsessive about the toil itself (the amount of coffee being drunk, the weariness of faces), but offers next to no insight into the work being created. There’s also a feeling that the filmmakers are pumping up the drama and making a big deal of every bit of conflict they can find (however hard they try, though, a foul-mouthed electrician playing hooky from work is not exactly a villain worth a lengthy and supposedly gritty” passage in their film).

Overall, this is a ride recommended for viewers interested in haunted houses as business ventures: it does offer insights about the logistics and promotion of such venues. That little kid in search of thrills that I always carry within me was deeply disappointed, but the grown-up me had quite a bit of respect for how persistent Teachout and Nash are in pursuing their goal and literally going for broke in order to make it happen. Still, I’d rather choke up the money and go visit their joint in Louisville than watch this rather lukewarm account of how the most ambitious part of Asylum Haunted Scream Park was brought into being.