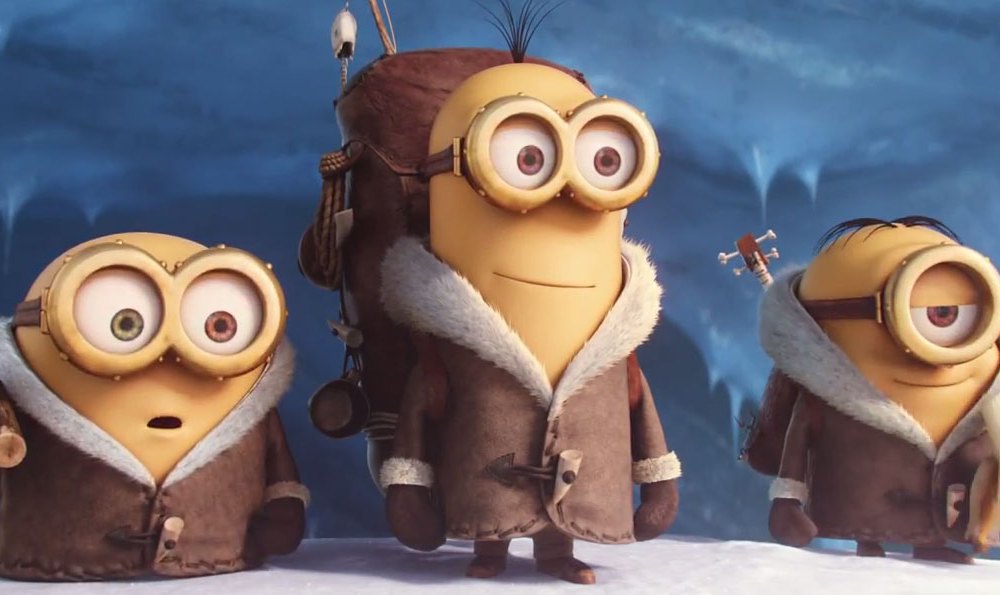 Children, those little clay-lumps upon whom pop culture can imprint with unmatched ease, probably shouldn’t be allowed around Minions. The little yellow pill-shaped hellions that star in this spin-off of upstart animation studio Illumination’s runaway success Despicable Me promote all of the most irritating impulses in youngsters. The nattering, runty henchpeople have no off switch, exuding manic energy with every hyperactive bounce. They’re on a perpetual sugar rush, easily distracted and highly enamored of mischief. Put simply, they’re bad examples. Unless parents are prepared to deal with a nonsense-spewing, inexhaustible rapscallion for the hours following the film, it may be wiser to get in line for Inside Out.

Even though its protagonists appear to be demons sent from the deepest reaches of Hades to annoy moviegoers into a premature grave, Minions is not an entirely evil film. Co-directors Pierre Coffin (who also contributes the vocal work for the minions themselves) and Kyle Balda demonstrate a surprising aptitude for silent comedy, approximating Charlie Chaplin’s misadventures on a week-long Pixy Stix bender. A misshapen, haphazard plot and one terribly miscalculated casting decision can turn the latter half of this svelte picture into an interminable drag, but even then, audiences can expect to scrounge up a few laughs. The grating ubiquity of the aggressive branding and advertising campaign behind Minions heralded an apocalyptic new low in children’s programming, with the little guys’ word-salad language as the final nail in the coffin of meaning and sense. The reality of the situation isn’t nearly as dramatic; susceptible to many follies typical of children’s programming but reliable for a few chuckles, Minions is simply a marginally acceptable way to kill 90 minutes.

The film leads off with its most inspired sequence, as the minions interpose themselves through various iconic periods of history in search of a master possessing suitable nefariousness. As The Turtles warble their classic “Happy Together” (one in a plentiful bounty of soundtrack selections pandering directly to trapped parents), the pint-size freaks ally themselves with the likes of a dictatorial pharaoh, Dracula, and Napoleon Bonaparte. A very specific sort of viewer might wonder where the scenes showing the critters teaming up with Hitler and Osama Bin Laden have gone, seeing as Geoffrey Rush’s narration states that the minions’ raison d’etre is to serve the baddest of the bad. That sort of viewer has wandered into the wrong auditorium.

The film gets down to business just in time for the swinging Sixties. Three emissaries — Kevin, Stuart, and Bob, who appears to be an infant, prompting pressing questions about the exclusively male-presenting minions’ reproductive capabilities — depart from their clan’s arctic headquarters to find a worthy villain. After a brief sojourn in Greenwich Village during its Warholian heyday and a side-trip with a family of bank robbers (as the matriarch, Allison Janney is perfectly cast), their search brings them to a villain convention in Orlando. It’s there that they glom onto villainatrix Scarlet Overkill, and the film collides into one of its most major shortcomings. As Scarlet, Sandra Bullock feels colossally out of place in the figuratively and literally animated world of Minions. There’s nothing lively or cartoonish in her voice, and she’s unable to keep pace with the exaggerated character design. The glaring incongruity leaves the potentially worthwhile Scarlet mangled, her lackadaisical vocals distractingly out of sync with the film’s unmedicated ebullience.

She and her husband Herb (Jon Hamm, pulling his weight) covet the Queen of England’s crown, and sends her lackeys to retrieve it. They kind of do, then don’t, then become the new regents of England, then don’t, then do, and none of it really amounts to much of anything. Minions takes place in an arbitrary series of circumstances, their only unifying rationale providing Stuart, Bob, and Kevin with opportunities to wreak piercingly high-pitched havoc. The film ekes a bit of humor out of the gibberish that the minions speak, some unholy bastardization of Italian, Spanish, French, and Hebrew. To comical effect, the minions sometimes speak in words that adults know and children don’t. (A minion cries “Mazel tov!” in one scene; cue knowing laughter from parents.) That’s a fine example of a subtle, out-of-the-way appeasement to adults in the audience. Conversely, impromptu Minionese renditions of “Make ‘Em Laugh”, the title number from Hair, and the Monkees’ theme song are rather poor examples. What the musical interludes’ inclusion accomplishes is not completely clear; they’re not particularly humorous, or clever, or entertaining. They happen, and then end, and then there is less of the film left.