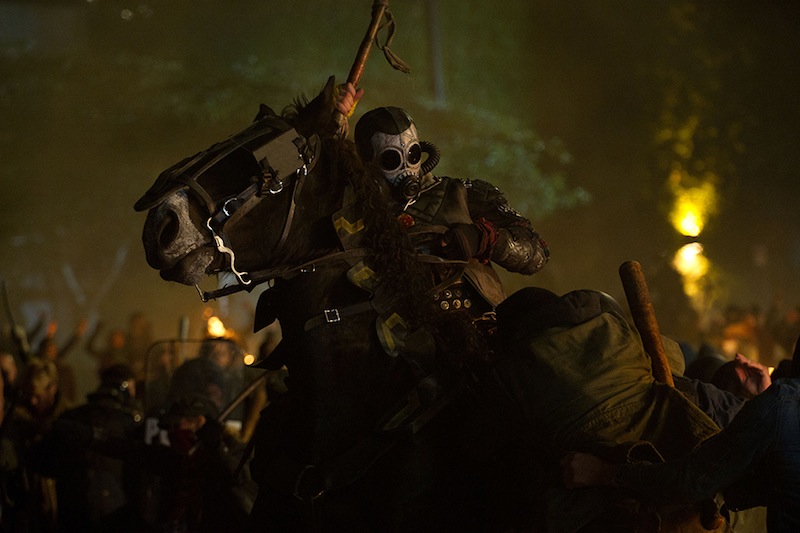 A Concert Film Defines a Band in ‘Metallica: Through the Never’

The framing device employed throughout Metallica: Through the Never may seem strange, but it elicits a key component of the band’s music. As Dane DeHaan’s roadie, decked out as Little Red Riding Hoodie, ventures out into Alberta streets rent in destruction by an Occupy-like uprising, the film swiftly and emphatically foregrounds the political content of Metallica’s early lyrics. Those songs fill much of the film’s chosen setlist, from the self-explanatory “…And Justice for All” to the capital-punishment-themed “Ride the Lightning.” Metallica may have subsequently turned more inward, but the lasting bite of their Reagan-era material slyly casts a band infamous for suing its young fans as still relevant to their own social beliefs.

Speaking of Reagan, the cataclysmic window dressing Nimród Antal places both around the stage and on it casts Through the Never as a kind of companion piece to Prince’s Sign ‘O’ the Times film, a concert with an equally thin yet impressionistically felt framing device that set its music against a gaudy spectacle of late capitalism. Prince’s film, with its recreated Hell’s Kitchen alley and sex shops provided a blissed-out social context for him to dance upon, twirling in front of light banks and smoke as if backlit by the bomb. Where Prince grooved, Metallica slam, using their own set-up of a digitally animated stage and colossal props to tap into more aggressive, forthright demonstrations against that angst.

And it soon becomes clear that this band of middle-aged, post-sober rockers can still rage with the best of them. James Hetfield, coated in Christian and straight edge tattoos that mark his survival, still barks out vocals while his guitar snakes thick riffs through Kirk Hammett’s melodic, high-register lines. Robert Trujillo stalks around like a jungle cat, pulling his hamstrings so taut he could play his basslines off of them. And Lars Ulrich, rooted in the center of the stage, occasionally flexes by jumping around his drum set to bang on cymbals and snares.

To watch them lock step into an eight minute song, five of which consist of delicately threaded but pounding solos held together by a hook of a groove, is to see why they tore a hole in a stale genre all those years ago, and why they remain the only act who can get away with a shot like this. Despite their status as metal’s biggest sellout, they will age better than Slayer, Megadeth or Anthrax, the respectively self-serious, fussily technical and clownish peers to whom they are most frequently compared.

Antal’s film cares less for the irreproducible experience of witnessing a Metallica concert than the manner in which they produce a sound that can set a sold-out arena moshing. (The only nod to the crowd can be found in the concise but precise summary offered by the fact that when Metallica plays their lighter song, the audience still breaks out actual lighters.) Befitting a film that nods to working-class protest, Through the Never calls attention to the sheer daunting task of putting on a Metallica show, with shots of colossal lighting setups whirring into place and of a road crew in hard hats frantically assembling a giant statue of Lady Justice that is constructed just in time for it to be blown apart.

To see roadies bustling (and, occasionally, catching fire) only enhances the Spinal Tap vibe of some of the production’s exaggerations. As the image bounces along from the band’s knotty interplay back out to the stage show, the DeHaan material and back again, one starts to get a full portrait, technical and experiential, of how Metallica operates. Small wonder, then, that the political nature of the narrative fades at its explosive climax sands away all the excess to communicate something far simpler: when Metallica comes to town, they level the place.