In “Lucy,” Scarlett Johansson Accesses 100% Of Her Awesomeness

And now for something completely different: Luc Besson presents Cosmos. Wet blankets across the Internet will invariably find a reason to fault Lucy, Besson’s latest, for leaning on urban legends and pseudo-science as the make-up of its basic conceit. If Neil DeGrasse Tyson found fault in Gravity‘s verisimilitude, then Lucy is liable to give him a fatal aneurysm; the film goes all in on the misconception that humans can only make use of 10% of  their brains’ full neural capacity, supposing that a person (the titular Lucy) with access to ever-increasing percentages of their brain power might become a superhero, or a god, or, at the very least, Sheldon Cooper.

What Lucy patently does not do is attempt to pass itself off as smart. In point of fact, it’s willfully stupid, ratcheting up its levels of ridiculousness with an anarchic mixture of defiance and glee; it’s easy to imagine Besson, who dropped out of school to pursue a career in filmmaking, cackling on the other side of the camera at the rampant parade of idiocy he marshals in scene after scene. Rather than bring Lucy down, though, the intentionally dopey bent invigorates it. The smarter Lucy becomes, the dumber the film becomes, and the dumber the film becomes, the more entrancing it is.

Besson kicks things off in Taipei after opening on a scene of primitive man drinking water out of a lake. (Images like this crop up constantly throughout Lucy‘s slim running time; it’s Besson playing the imp, cheekily foisting nature documentary fare on his audience.) We’re introduced to our wide-eyed heroine (rising science-fiction icon Scarlett Johansson, avian, cold, and wonderful) as she’s coerced, by her boyfriend, into a drug deal that goes about as wrong as any big screen drug deal possibly can, leaving her at the mercy of mob honcho Mr. Jang (Oldboy‘s Choi Min-sik) with a bag of Breaking Bad blue powder narcotics sewn into her stomach.

Ever wondered what Maria Full of Grace would have been like with Luc Besson at the helm? Wonder no longer. Before long, the packet of dope splits open, pouring straight into Lucy’s bloodstream and turning her into an asskicking machine-cum-bioorganic supercomputer; she makes it her business to ruin Jang, and also figure out what to do with her burgeoning ultra-intelligence by contacting Morgan Freeman’s befuddled neurological professor. From there, Besson globe trots, taking us to Berlin, Rome, and Paris, where we’re treated to the ultimate symbol of the director’s disdain for higher education by blasting the Sorbonne to smithereens. 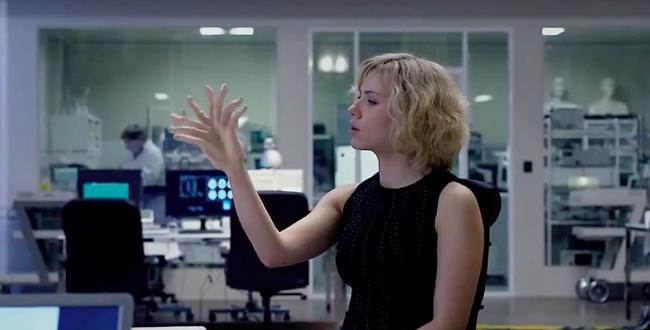 Lucy may be the ultimate Besson film; it collects all of his proclivities for mayhem and chaos in a tight, 80-minute package, winds it together with his trademark black humor, and even goes so far as to reference some of his greatest hits. (There’s a modified take on one of The Fifth Element‘s best one-liners tucked in here.) Concurrently, it’s also the ultimate “turn your brain off” movie in the sense that it’s not interested in logic and rationality as much as it’s interested in getting Johansson to a point where she can effortlessly control space and time. Does the film’s flimsy grasp on how technology functions matter in a movie where the once and future Black Widow out-Neos Neo, blithely tossing aside bad guys like bangs as she deciphers telecommunication signals streaming through the air like so many strands of programming code?

That, by the way, doesn’t scratch the surface on how far over the top Besson takes things in his climax, which takes the film into serious 2001: A Space Odyssey/Robert A. Heinlein/Terrence Malick territory. It’s nuttier in practice than can possibly be articulated through writing, delightfully weird with a sense of purpose and top-notch craft. Johansson, meanwhile, feels so at ease working within the parameters of science fiction that it’s hard to imagine why it’s taken her so long to adopt the genre as a regular backdrop. (Most likely because of The Island.) She’s making it a habit; Lucy marks the third sci-fi film Johansson has involved herself with in the last eight months (including December’s Her and April’s Under the Skin). Both of those films are Lucy‘s superiors, but Besson mines so much entertainment value out of his absurd, unrelenting foolishness as to feel manically inspired in its own way.