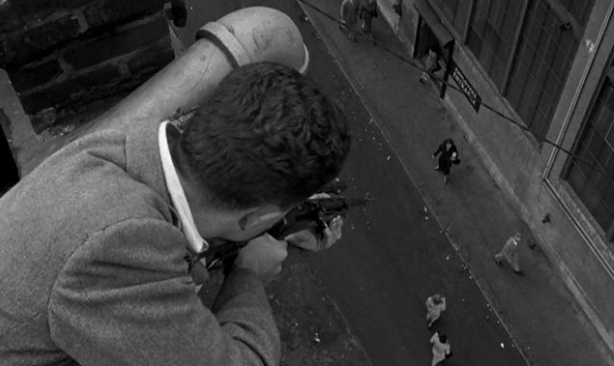 Looking Back: ‘The Sniper’

“TO THE POLICE—STOP ME—FIND ME AND STOP ME—I’M GOING TO DO IT AGAIN.”

You can almost feel the desperation bleeding out of those words, scrawled in charcoal by Eddie Miller. They stink of sweat and self-loathing. Eddie’s the title sociopath of Edward Dmytryk’s The Sniper (1952), a film that curls up inside his sick head. This is some searing psychological noir, a Notes from Underground for the 1950s, invested with social conscience by producer Stanley Kramer. Alternating between police procedural and proto-Henry “portrait of a serial killer,” The Sniper is cracked down the center just like its antihero’s psyche.

That procedural half is easily the weaker of the two. Dominated by the lectures of a police psychiatrist, it grows increasingly didactic in its discussion of mental illness and crime. It’s choked with dialogue, whereas the rest of the film is devoted to pure pictorial storytelling. Arthur Franz gives a quiet performance as Eddie, restricting himself mostly to these expressive grimaces and half-smiles. He simmers, always on the verge of boiling over with frothing psychotic rage. Like his descendant Travis Bickle, Eddie’s a human cesspool with all of his era’s worst impulses bottled up inside him. Misogynistic impulses, ones he tries to resist but can only shake off with a cathartic squeeze of his rifle’s trigger.

Forgoing voiceover, Dmytryk exploits the Kuleshov effect to convey back story. Early in the film, Eddie goes for a walk and cringes at all the happy couples, seethes as two women talk romance, and registers pain on his own face as a mother slaps her son. Childhood trauma, oedipal frustration, a vicious Madonna-whore complex: it’s all right there in Franz’s furrowed brow. Dmytryk favors bisected compositions, so numerous shots juxtapose Eddie’s provocation and reaction on either end of the frame. It’s the very same style Dmytryk used to render urban spaces as nightmares in noirs like Murder, My Sweet and Crossfire, but here applied to one man’s bloody war with both himself and the rest of the world.

On occasion, Eddie experiments with normative masculinity. He delivers a dress to a client, then has a beer in her kitchen; later, he chats up a woman in a bar, describing himself as a successful engineer. But his resentment interferes both times, swelling into homicidal fantasy and then full-blown murder. More typical of his dysfunctional sexuality is a roof-set interlude where he waits for a victim, biding time by masturbating his rifle. What The Sniper’s taciturn screenplay can only hint at via subtext, Dmytryk’s camera and Franz’s face spell out: that despite its squeaky-clean self-image, postwar America is still festering with disease. That for all its nuclear families and hard-working policemen, this country is still a breeding ground for sexualized violence.