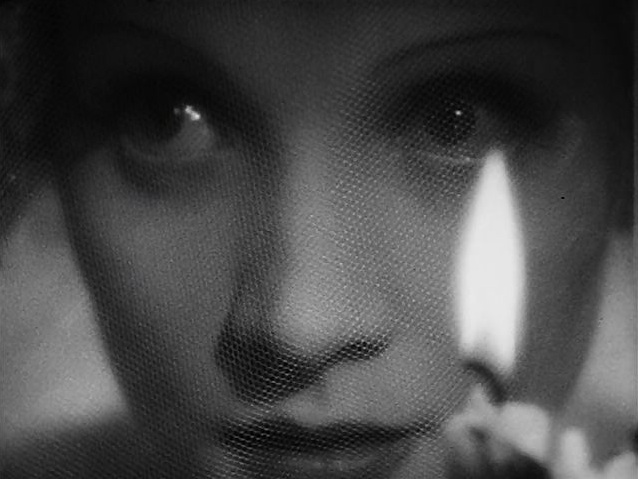 Looking Back: ‘The Scarlet Empress’

The first thing I notice about The Scarlet Empress (1934) is Marlene Dietrich’s cheekbones. They’re essential to the film, as essential as its chiaroscuro lighting or the very existence of Russia. Another woman could have played Catherine the Great here, I suppose, but it would’ve been a thoroughly different movie without Dietrich’s one-in-a-million physiognomy—those prominent cheekbones and those gleaming, ample eyes. Hers is almost less a face than an objet d’art, photographed in a thousand subtly different ways by Josef von Sternberg and yielding a different shade of pleasure each time. He strains it through gossamer, douses it in shadow, holds it in the tightest of close-ups. This movie isn’t composed of shots, but of Marlene Dietrich’s face in its many iterations, that most basic building block of hysterical melodrama.

So much for the conventions of Hollywood historiography. So much for trifles like visual and moral clarity. In The Scarlet Empress, von Sternberg renders national myth as tabloid headline and fractured fairy tale. Destiny thrusts naïve young Catherine into a sunless palace rife with sexual and political paranoia, a royal court with period costumes and production design lush beyond the dreams of excess. There, her uterus is obsessed over by a queen bitch mother-in-law; her dreams crushed by a babbling husband (“I hate my wife,” he hisses behind a huge grin); and her desires aroused by a debauched count. Hemmed in by both royal etiquette and von Sternberg’s baroque compositions, she has no choice but to learn the ins and outs of power firsthand.

This transition from innocence to experience is the meat of the film, and it’s intoxicating in its cynicism. Early on, for example, Catherine has a boudoir tête-à-tête with her husband’s mistress, during which she asks in the coyest of voices, “Lover? And what may a lover be?” Not long thereafter, she becomes the lonely vertex of a romantic triangle with her mother-in-law and beloved count. Soon she’s hooking up with (and pregnant by) a random soldier; playing blind man’s bluff as the empress dies; and initiating elaborate revenge against the men who’ve betrayed her. It’s a gratifying role reversal, executed with Pre-Code amorality and unflinching technical bravura. In fact, between its expository title cards and von Sternberg’s knack for wordless montage, The Scarlet Empress often recalls the visual fluidity of the late silent era.

Unsurprising, then, that like many great silents it has not the slightest interest in subtlety. It’s lurid, garish, kinky. Sometimes von Sternberg even trespasses into the avant-garde, throwing shadows that abstract his actors’ bodies into blobs of light and space. Sometimes he squeezes their heads toward the bottom of the frame, so it looks as if the palace’s towering gargoyles might yet devour the screen. And, of course, he’s always discovering new angles at which to frame and light Marlene Dietrich, who spends each scene clad in a different variety of ruffled imperial drag. She’s the rotating ballerina in this sumptuous music box of a film, one whose tune is by turns shrill and sensual. It’s never tender, but then—fond as I am of tenderness—who ever said onscreen cruelty can’t be just as fulfilling?