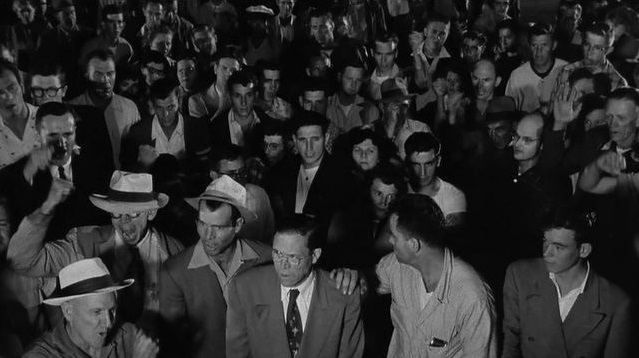 Looking Back: ‘The Phenix City Story’

I don’t usually think of myself as an angry person. When life is unfair, my reaction tends to be one of anxiety, or maybe sadness. Rarely do I lash out. But watching Phil Karlson’s The Phenix City Story (1955) just pisses me off. It makes my blood boil. This movie’s depiction of violence and municipal corruption in the Deep South evoke a rage that surprises me with its intensity. The filmmaking here is lean, impassioned, as seamy as that of any cheap noir but with a knife edge of documentary realism.

Indeed, The Phenix City Story is as “ripped from the headlines” as you can get—the real-life saga it dramatizes having unfolded in eastern Alabama only a year before the film’s release—and the film emphasizes this by opening with a 13-minute newsreel prologue. Several Phenix City residents share their own accounts, and though they may be stiff or inflected by the thickest of southern accents, these eyewitness testimonies grant the film some credibility, as well as a sense of immediacy. Pulpy as the film’s action may sometimes seem, the prologue preemptively reassures us that all of this really happened to real people, and not too long ago. Which makes what follows that much more rage-inducing.

This is a David and Goliath narrative, pitting a handful of lawyers and civic leaders against a political machine led by racketeering thugs. It’s not unlike, say, Mr. Smith Goes to Washington, except that Karlson shifts the story’s focus from the resilience of the human spirit to the cost of reform—the sheer quantity of blood and sweat that must be shed in order to change anything. The film measures its heroes’ progress in terms of onscreen violence: that which is meted out, endured, dismissed by the police, and met with more violence. This is a brutal movie, the kind where you feel the meat being pounded by each punch, the crunch of fist against face and skull against pavement. Where blood drizzles down sweaty, wounded faces, looking even more gruesome in black and white.

Unusually for a movie of its era, The Phenix City Story even broaches issues of racialized violence when a little black girl is murdered offscreen and her body thrown onto a white family’s lawn. On one hand, this incident follows a trope that should be familiar to latter-day viewers, where black bodies are abused in order to prick white consciences. (“This will happen to your kids too,” reads a note attached to her body.) But surprisingly, the film actually acknowledges why the villains targeted this particular girl—in the police dispatcher’s blasé manner (“G’over an’ have a look…”) as he reports the crime, for example, or the police force’s lack of interest in following up on it.

Through her death, the real world of lynchings and Jim Crow intrudes (albeit indirectly) into white filmmaking, and that intrusion’s indicative of what Karlson’s blunt, no-bullshit style achieves: nothing less than, to cite Jonathan Rosenbaum’s seminal essay on the film, “the apotheosis of southern sleaze.” The Phenix City Story is reportage, a loose recreation of actual events, but it also encapsulates a whole rotten way of life. And perhaps Karlson’s greatest asset in that department is character actor John Larch, who plays a good ol’ boy named Clem Wilson.

Larch was tall, athletic, with a potato nose and a hell of a sneer, all of which he employs to enraging effect here. As Clem, he’s the epitome of white-trash sociopathy, lacking much in the way of smarts or talent but with a real knack for hurting people. The worst part is you can’t really hurt someone like Clem in return, because Larch makes him so obviously devoid of an inner life. He can’t feel guilt or frustration, because he’s nothing more than a hateful body and self-satisfied grin. He’s a tool of Phenix City’s political machine, which makes his every crime that much more galling.

It’s the Clem Wilsons who keep evil in a position of authority. They’re the ones who have to be matched, blow for blow, in order to effect any change; they make the fight for justice a slow, gory, exhausting one. They lurk in the stark shadows and smoky back rooms of Phenix City, though they’re comfortable out in the daylight, too. What have they to fear? They’re the men who prop up rule by brute force, and the town’s crusaders can only oppose them if they’re willing to die for it. That’s the truth, communicated with scalding directness by this outrageous film noir.