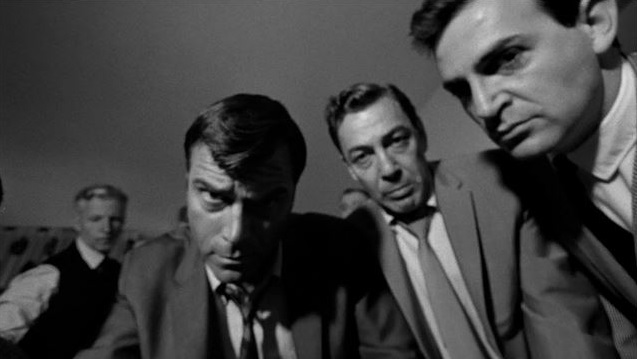 What if you could go to sleep tonight and wake up tomorrow morning with a new life and the face of Rock Hudson? That’s the tantalizing hypothetical question posed by John Frankenheimer’s sci-fi thriller Seconds (1966). The man forced to answer it is Arthur Hamilton, a nervous New York bank executive nosediving into middle age, languishing in a loveless marriage, willing to give anything for a fresh start. He’s contacted by a mysterious corporation and—$30,000, extensive plastic surgery, and one faked death later—they give him a new lease on life at an oceanfront community in southern California. Ah, but of course this wish fulfillment fantasy has a sinister twist to it. They always do.

Yes, though it may briefly indulge in a red herring love story, Seconds is some unusually bleak science fiction, cold and cerebral. Between its morality tale structure and the social commentary that barbs its horrors, it’s not unlike an especially creepy episode of  The Twilight Zone. And with its philosophical emphasis on identity and free will, it bears a strong kinship with the work of Philip K. Dick. This is a tale of interchangeable men in gray flannel suits played by character actors with sweaty, worn-out faces. The sick joke being that even after Arthur Hamilton becomes “Tony Wilson,” with Hudson’s matinee idol good looks, he’s as sweaty and worn-out as ever. Just a little younger.

Poor sucker merely swaps one nightmare for another. The film’s shooting style certainly doesn’t change after Arthur’s transformation, either; its visual textures are as thick with anxiety as ever. Thanks to superstar cinematographer James Wong Howe, every single shot in Seconds is a microcosm of paranoid modernity. Working in high-contrast black and white, Howe deploys every last camera trick: low angles, canted angles, fisheye lenses, grotesque close-ups, anything to render familiar locations like offices and suburban houses utterly alien. The film’s dialogue may occasionally press its points a little too hard, but that camera compensates with ceaseless invention.

This abrasive visual schema guarantees that long before the film’s sci-fi conceit is explained, viewers are already knee-deep in a mid-’60s America where “hope” is a foreign concept. Where disappointment is the only emotion Arthur can muster up for his past life before he sloughs it off like a snake’s skin. Where his supposed widow will later say of him, “We lived our lives in a polite, celibate truce.” This distorted vision of middle-class existence is more than a little heartbreaking, as is the fact that his final realizations all come too late. But even in Seconds, there really are no second chances.