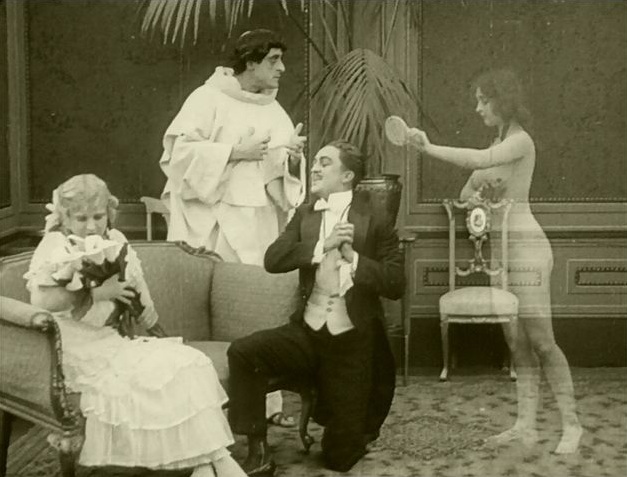 If you’ve seen any movies by D.W. Griffith or Edwin S. Porter, you’ll know roughly what to expect from Lois Weber’s Hypocrites (1915). It’s shot with a mostly static camera, its action is framed by an invisible proscenium arch, there’s a paucity of close-ups, and the performances are near-devoid of nuance; all pretty typical for early silent filmmaking. What really fascinates me about this movie, then, lies not so much in Weber’s technical acumen as in her chosen mode of storytelling: religious allegory. She eschews conventions of plot or character, creating instead a 50-minute tract built from blunt symbolism. Hypocrites is a silent PSA against hypocrisy.

No aspirations to psychological realism here. No traditional narrative structure, either. The film is loosely bifurcated between the present, where a preacher lectures his unreceptive flock, and the past, where that same preacher imagines himself as Gabriel the Ascetic, a noble monk laboring over a nude statue he calls “Truth.” When the statue is unveiled, however, onlookers are scandalized and immediately rally to execute him. Back in the present, Gabriel and the Naked Truth (now embodied as a live, translucent woman) flitter from one setting to another, exposing modern hypocrisies. Then, several of these vignettes later, the film ends on a twist: the preacher has died while dreaming.

Almost a century later, it’s hard to suss out what exactly Weber is saying beyond the obvious—i.e., that people sometimes go against the values they claim to hold, then lash out against those who indict them. Moralizing tends to stale quickly, and when watched from this end of film history, Hypocrites seems like an especially aggressive persecution fantasy. Weber’s moral high ground is so well-maintained that it’s even literalized onscreen when Gabriel leads a few willing parishioners up a steep (symbolic) hill. But for all their self-righteousness, images like this are still the film’s major latter-day draw.

Thanks to the film’s allegory and Weber’s consequent disinterest in realism, much of the imagery in Hypocrites feels unhinged from the physical world. That ethereal nude, for example, criss-crosses space and time, and she’s unmatched in her graceful transgression by the whole rest of silent cinema. Or the way Weber’s camera indulges in a couple of tracking shots in order to map out hypocritical communities, both past and present. The lessons this movie was made to disseminate have since been rendered incomprehensible by sweeping cultural change. But still, it’s intriguing to watch a foundational filmmaker like Lois Weber try to communicate abstraction in visual terms.