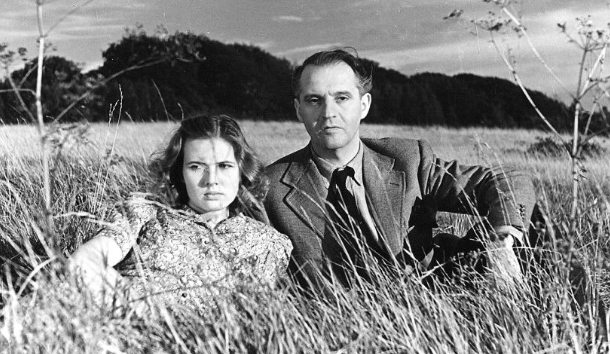 Looking Back: ‘A Canterbury Tale’

Welcome to the first edition of Looking Back, where each week writer Andreas Stoehr will highlight movies from the underexplored grottos of film history. We hope you enjoy!

Throughout the 1940s, Michael Powell and Emeric Pressburger collaborated (as “The Archers”) on a handful of the greatest, most British films ever made. Films like The Life and Death of Colonel Blimp, so raucous in its epic sweep through history, or The Red Shoes with its Technicolor ballet—these enormous, impassioned films that have emblazoned themselves on my memory. A Canterbury Tale (1944) is narrower in scope and looser in structure than those two; tucked away among such giants, it’s easy to miss. But, as I was reminded while watching it this past New Year’s Day, Powell and Pressburger are always ready with surprises. This is a hell of a movie, bucolic and beautiful, as well as a key text when it comes to understanding their filmography.

The plot here is that of a wartime whodunit: while passing through the village of Chillingbourne, a young woman has glue dumped in her hair—one in a series of local glue attacks—so she teams up with two soldiers, an American and a Brit, to track down this “glue man.” But that trifling mystery is mere window dressing. Instead of milking it for suspense, Powell and Pressburger meander across the countryside. They dwell on relationships, dialogue, and light fish-out-of-water comedy, using the film’s lengthy run time to evoke a very specific cultural and historical atmosphere. The filmmakers are invested less in story for its own sake and more in the county of Kent, where Chaucer and all the subsequent centuries have mingled with the loam. It’s by virtue of walking on this hallowed land that each character is unknowingly transformed into a latter-day Canterbury pilgrim.

Some mild romance arises between the soldiers and the girl, but Powell and Pressburger are much too savvy to let it descend into a conventional love triangle. Instead, they develop a trilateral friendship much like those in Colonel Blimp or the duo’s postwar fantasy A Matter of Life and Death, functioning both as a geopolitical microcosm and as a true-to-life representation of strangers caught in one another’s orbits. They crack jokes, hack away at the mystery, share stories of those they’ve lost in the war… and as they wend their collective way toward Canterbury, intimacy blooms between the three of them. (What better way to become tight-knit friends than by collaborating on some amateur detective work?)

On the surface, A Canterbury Tale is a film about British heritage, about the traditions and beauty then threatened by war. This is evident enough from its abundance of location footage, showcasing the rolling hills of rural Kent and the architecture of Canterbury. (The film’s further realist bona fides include the use of extras gathered from nearby communities and the casting of real-life American sergeant John Sweet in a starring role.) But beneath those more ephemeral issues of British self-preservation, shrouded in Romantic visual poetry, lies a bigger truth: each one of us is sculpted by huge, impersonal forces. Each of us is swept up in the tide of history. The best we can hope for is some solidarity, some laughter, and perhaps a blessing once we get to Canterbury.