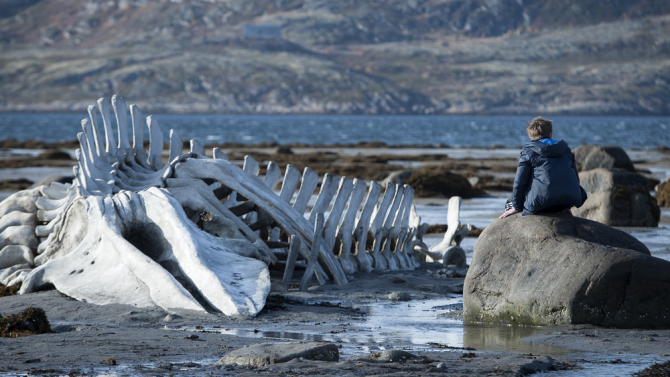 Leviathan, the pitch-black new film from Elena director Andrey Zvyagintsev, is bookended by montages of startling, almost cosmically withering imagery. Chilled to prehistoric temperature in the blues and grays of Mikhail Krichman’s photography, it opens wide in a God’s-eye view of a distant coastline, before peeling back layers of landscape until they take on a recognizably human dimension—not unlike a series of colossal Russian dolls unnesting to reveal a decaying center, with its evidence of life and industry blotting the terrain. It’s the Malickian equivalent of Will Smith wisecracking “Welcome to Earth,” and the next two hours are the accompanying punch in the face—in glorious, acerbic slow motion.

Though whale skeletons make thematic cameos, it’s nature itself—both environmental and man’s own—that serves as the eponymous beast threatening to engulf the doomed lives at stake here. Leviathan isn’t, of course, the only recent film of that name to explore the majestic indifference of nature, but while Zvyagintsev’s film is certainly conventional next to that of Sensory Ethnography Lab’s, it’s no less powerful. Part of the grip the movie asserts springs from the simplicity of the premise, a classic man-versus-system duel that, though entrenched in a rich sociopolitical dimension, easily translates to a universal anxiety.

At the centre of the storm is Kolya, fiercely inhabited by Aleksey Serebryakov, whose seaside home–perched on the coast of the Barents Sea in Northern Russia–will soon become a civic and moral battleground. Kolya’s real estate is prized by the local mayor (Roman Madianov), a Bürgermeister-via-Russian mobster willing to cheerfully frame and swindle Kolya out of his property. Things are complicated by a Moscow lawyer (Vladimir Vdovichenkov) and his relationship with Kolya’s wife (Elena Liadova), and a petulant teenage son (Sergey Pokhodaev) who resents his step mom with terrifying vigilance.

That events unravel is no surprise, though the drama’s downward trajectory into the existential abyss is tempered by Zvyagintsev’s taste for gallows humor—fueled, in no small part, by what must be some kind of record for on-screen vodka consumption. Seriously, a shot-for-shot drinking game would leave most viewers dead before the end credits. In one of the film’s comic set pieces, a family picnic becomes a stage for blunt political guffaws, as the drunken men fire weapons at portraits of bygone Soviet leaders before collapsing into an emasculated vodka morass. As Kolya’s legal predicament intensifies, Zvyagintsev lands some biting jabs at the ineffectiveness of religion—the void that filled the void left by the state—as it fails to console a man railroaded into a desperate situation. It’s hardly the stuff of spit takes, but it’ll warm the cockles of a black heart. (Know your Book of Job for extra inside giggles.)

Abetted by one of Philip Glass’s more pensive scores, Zvyagintsev orchestrates some stunning sequences in Leviathan’s beautifully grim final stretch, like a shot from inside Kolya’s house as the wrecking claw of a construction crane crashes in like a Toho monster, or the echoed images of church ceilings that resonate with vicious irony. And always, there’s the grand specter of nature, reminding the characters just how little their squabbles matter. Each is drawn, as through some primal magnet, to the coastline, apparently the only constant here to level the petty bickering. The movie’s final montage is a masterly mirror of the first, as though the otherworldly spectator, done with humanity, had casually flipped the zoom-out switch and lifted off back into the atmosphere.