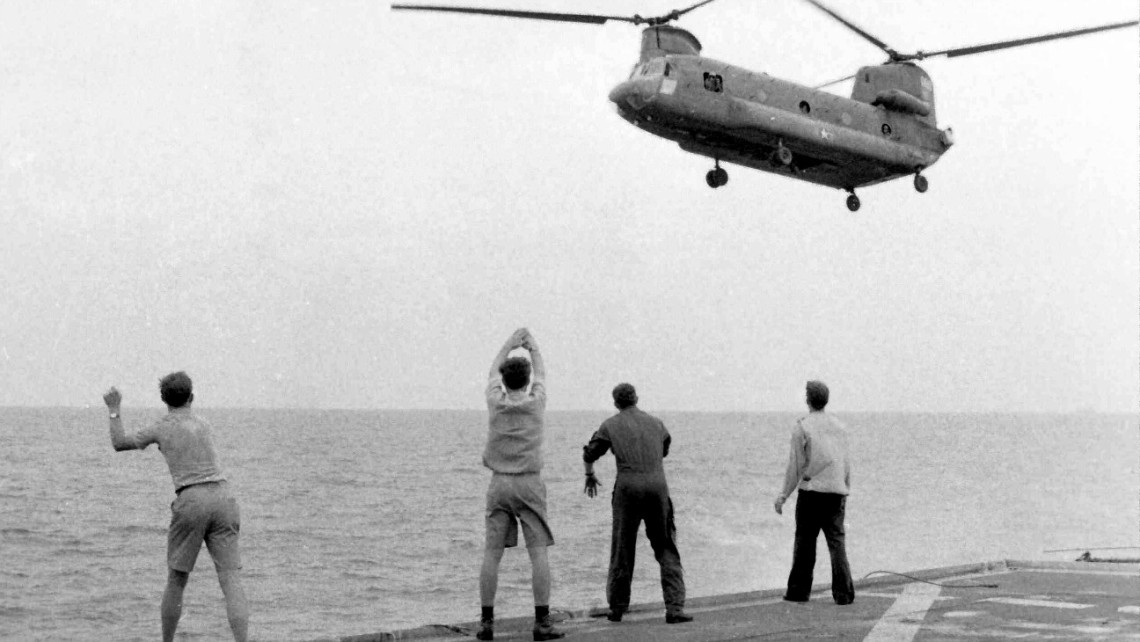 A riveting tale told in the most pedestrian and unimaginative fashion possible, director Rory Kennedy’s Last Days in Vietnam squanders some stunning archival footage and a few heartbreaking interviews, flattening the Fall of Saigon into an oatmeal-bland apologia. Absent any outrage or blame, this documentary regards the spectacular incompetence that led to an extremely shameful public act of abandonment in April of 1975 with a shrug, adopting the tone of featured shitbag Henry Kissinger, who all but comes out and says: “Welp, folks, at least we tried our best?”

This is a story that should make any American citizen’s blood boil, and Kennedy (along with writers Mark Bailey and Keven McAlester) trot out a surfeit of jaw-dropping anecdotes, breathtaking in their sheer bureaucratic ineptitude. But the film is set to a mild simmer. Commissioned by PBS’s “American Experience” series, Last Days in Vietnam exemplifies the best and worst of the MOR televisual history-lesson format.

The storytelling is clear and concise, perfectly accessible and presumably quite valuable to viewers with little or no knowledge of the subject. (There are even 3D maps!) At the same time, the filmmaking is flat and entirely devoid of interest. Muted contemporary musings cut in and out of artlessly edited old footage while generically mournful music tells us when we should feel sad about what we’re seeing. It’s like the movie was designed for high school kids to snooze through during history class.

Emboldened by the resignation of Richard Nixon, who they considered a mad bomber and a psychotic (hardly inaccurate assessments), the North Vietnamese Army said to hell with the Paris Peace Accords and began bulldozing their way south, seeking to conquer the whole damn country before Ho Chi Minh’s upcoming birthday. The Ford administration was left powerless by a hostile Congress, a President who really didn’t seem to want to be there that day, and an American populace who had already had quite enough of war in the former French Indochina, thank you very much. But as the tanks rolled downhill with hundreds of Americans and hundreds of thousands of our South Vietnamese allies directly in the path of destruction, Nero fiddled.

Well, not exactly Nero. Graham Martin, the U.S. Ambassador to South Vietnam, spent months cheerfully ignoring all evidence of the inevitable and kept whistling a happy tune even after Da Nang fell. Rogue CIA agents were secretly smuggling their South Vietnamese friends and families out of the country while the Ambassador refused to even approve an evacuation strategy for Saigon. The surreal, eleventh-hour catastro-fuck that followed makes up the back half of Last Days in Vietnam.

No matter how mediocre Kennedy’s filmmaking, it’s hard not to get swept up in some of these stories — in the haunted reminiscences of some damn good men who bent the rules as far as they could to save as many people as possible. (“I figured it would be easier to beg forgiveness later than ask permission now,” explains Special Forces Advisor Richard Armitage, who covertly conspired with the South Vietnamese Navy to smuggle out some 30,000 refugees.) It’s also just as hard not to cringe at stuff like Marine Guards being tasked with burning a million dollars in cash at the U.S. Embassy payroll office because nobody in charge could figure out how to get the money out of there.

That’s a ready-made giant, honking metaphor that Kennedy doesn’t have any interest in touching. Nor does she seem to have much interest in the South Vietnamese people, period. (With the exception of a couple of token lip-service talking-heads, the “American Experience” imprimatur should be taken literally here.) The fact that those left behind were either executed or sentenced to re-education camps gets glossed over during the closing credits, in favor of one more shout-out to our brave boys who made the best out of a sorry situation. (Y’know, the one we bungled?)

Like far too many contemporary war films, Last Days in Vietnam would rather we celebrate individual acts of valor than question the larger, rotten context that made them regrettably necessary.