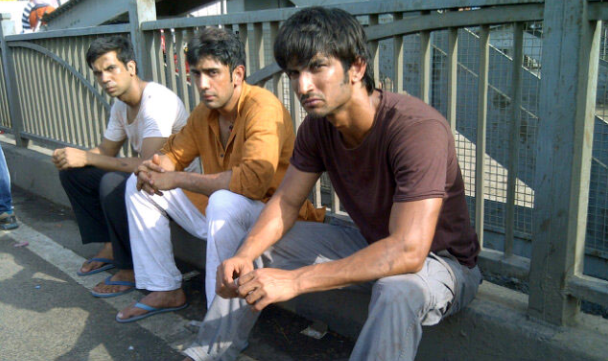 Director Abhishek Kapoor’s third feature, Kai Po Che!, tells the story—mostly in flashback—of three friends in the Indian city of Ahmedabad who, at the beginning of an economic boom in the early 2000s, set out to open a sports academy. The cricket-mad Ishaan (Sushant Singh Rajput), practical-minded schoolteacher Govind (Raj Kumar Yadav), and passive politician’s nephew Omi (Amit Sadh) find their friendship tested by a variety of factors beyond their control, from politics, to romance, to natural disasters. It’s quite the story, and while not the most adventurous piece of cinema on record, it’s extraordinarily well-acted and has moments of great emotional power.

Based on the best-selling novel The 3 Mistakes of My Life by Chetan Bhagat, Kai Po Che!‘s greatest strength is in the depth of its character relationships. Kapoor sacrifices narrative momentum to savor the connections between people, and while this leads to the occasional slow patch in the film it also lends even more richness to the moments of action and drama that do occur. Additionally, the alternating tempo and tone makes events like a catastrophic earthquake, or the escalation of a conflict at once political and religious, even more shocking.

What Kapoor is able to accomplish tonally is aided in large part by a truly wonderful cast. The standout is Sushant Singh Rajput as Ishaan; the role is the movie’s flashiest and is given the most attention, but Rajput inhabits the passionate former local cricket star with verve. A great deal of his story deals with his relationship with a young cricket prodigy, whom he nurtures and develops a particular bond with. A great deal of the movie as a whole hinges on this relationship, which is in turns compelling, frustrating, and touching, Kai Po Che! in miniature. The characters of Govind and Omi are a bit thinner, but Yadav and Sadh (respectively) play them with great skill. The friend cohort as a whole is as strong as any one is likely to encounter in film: the purpose of the leisurely build in Kai Po Che! only really becomes apparent in the second half, when suddenly the events of the film are all the more emotionally powerful for the meticulous construction of the protagonists as fully realized human beings.

This, more than anything else, is something rare and notable in Kai Po Che!. The restriction of telling a complete story in two hours often leads to either character moments being elided or a need to streamline a narrative down to its bare bones. But what Kapoor and his protagonists (among whom is the key supporting role of Ishaan’s sister Vidya, played charmingly by Amrita Puri) present is as strong a sense of shared history between audience and story as the characters share with each other, and a depth that feels more akin to the rhythms of life than it does with customary cinematic artifice. That this takes place in a film whose most prominent subplot is the manifestly artificial “unheralded sports genius triumphs over adversity” story formula is truly remarkable.

The main debit in Kai Po Che! is in those occasional lapses into soapy familiarity. The main villain of the piece, Omi’s gangsterish politician uncle, is a bit of a cartoon character, seemingly bad because someone has to be. And there’s a bit of business toward the end where—as foreshadowed in the Chekhovian tradition as it may have been—someone is suddenly running around with a gun in a fashion that again, seems less organically motivated than it is simply that this is the point in the movie where someone is running around with a gun. To be clear, these are not major issues. Neither entirely disrupts the film. They more exist in sharp contrast with the human, organic things the film does right.

Kai Po Che! falls a narrow degree short of greatness. Kapoor’s visual sense is occasionally a bit flat, if consistently competent, and, as above, some of the melodrama is a little awkward. But these problems are outweighed by the immense force of the performances. Kai Po Che! is a fine example of that elusive and sought-after entity, the crowd-pleaser. It becomes that thing not by the kind of cynical manipulations one normally associates with the pejorative sense of the term, but by being sincere, pure of heart, and frankly emotional. Abhishek Kapoor and his actors have done a fine job in Kai Po Che!, a film for fans of all stripes.