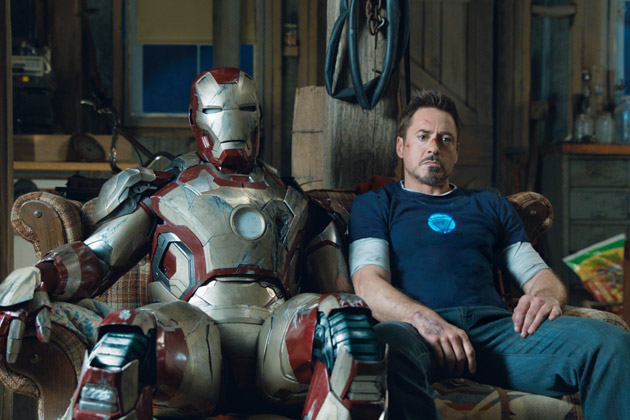 Narcissism, Combat, and a Man in a Can in Iron Man 3

There’s a scene early on in Iron Man 3 where Tony Stark is having a casual lunch with long-time buddy James Rhodes, aka the “Iron Patriot,” about a terrorist that has been launching attacks on US properties and soil. Tony is prodding Rhodes for information, as he wants to help. Rhodes is cagey, not just because it’s classified homeland security information, but because it’s, as he puts it, “not superhero stuff”. Tony later suffers an anxiety attack when a child fan asks him about the events of The Avengers. He’s feeling exposed and vulnerable in this new world of gods and monsters, and he doesn’t know how to cope. He has no super-powers, no physical prowess, just his intellect and machines. He is, as he puts it, just a man in a can. It’s no wonder he would want to take on terrorists, something he knows and understands. It’s this recurring idea that pervades throughout the film, and it gives us a sense of a truly vulnerable hero.

That sense of direction and focus is what gives Iron Man 3 an edge in the Marvel movie pantheon. Whereas the first Iron Man film benefitted from a sense of wiggle room and improvisation, giving it a breezy yet character-driven tone, the second entry was rushed into production without a script or a clear sense of what it was going to be. As a result, it ended up an unwieldy and aimless mess that contributed nothing to the progression of the characters or the mythology.

With The Avengers and Iron Man 3, Marvel is headed in the right direction, hiring filmmakers who are writers first and foremost to helm their own visions of this grand universe. That’s exactly what Shane Black does here, and while it likely won’t sit well with a lot of comic book purists, the film is a satisfying and wholly engaging character arc that follows a massive crossover event perfectly.

Black, known for writing 80’s and 90’s action films such as Lethal Weapon, The Last Boy Scout, and his directorial debut, Kiss Kiss, Bang Bang, sacrifices none of his trademark voice here, and all the better for it. It’s impressive that even while working within the Hollywood blockbuster system, he made a film wholly his own, down to the bookend voice-over narration. It only helps that Black and Downey Jr. already have a great rapport from their earlier collaboration, and even after now playing the character a total of five times, goes to show that there’s still new territory to explore.

Even more impressive is that it goes in a direction somewhat against the grain of most superhero sequels. Usually, these films just simply increase the potential physical threat to the hero, in a calculated effort to make the audience worry for their safety. And while the new baddies here are certainly a physical presence and worthy foes, that isn’t Black’s main concern. Stark is suffering from PTSD of sorts, unsure of how to mentally cope with the events of The Avengers, and it makes him feel very, very small and exposed. Gone is the cocky attitude of the Tony Stark who only had to worry about terrorists and corporate betrayals. Sure, he’d have to fight someone in an overpowered suit of armor from time to time, maybe take a little gunfire, but it was nothing his superior intellect and machines couldn’t handle. His confidence of being the biggest gunslinger in town has been completely stripped of him, and it’s eating away at him from the inside.

What we’re left with is a man who needs to get his mojo back so he can get back to saving the world, and the road to get back there pushes him to his limits. On top of all that, the film is just a blast. In typical Shane Black fashion, it continually turns expectations of the story on their head. No matter how much you think the marketing for the film has spoiled, that’s not the film you should expect, and that’s a good thing. Whereas most films dealing with the themes at play here would go for an overly serious tone, Iron Man 3 is genuinely upbeat and just plain fun. There are stakes, but nothing Stark can’t handle. After all, he survived hurling a nuke into an inter-dimensional wormhole, what are a few terrorists compared to that? Likewise, Shane Black’s buddy-cop flick sensibilities are in full effect here, particularly towards the second half. The wisecracking banter throughout lands every time, and pushes the limits of what is and isn’t acceptable to say in a film like this. It’s just damn good dialogue.

It’s not without some wrinkles though. As thematically tight as the film is, the plotting suffers a bit, especially towards the third act. Guy Pearce, Ben Kingsley, and James Badge Dale give terrifically compelling performances as the film’s primary antagonists, but their motivations are never really all that defined. Great acting and defined personalities save them from being throwaways, but by the film’s big finale, I still wasn’t sure exactly what was driving them. Something about controlling the wartime economy, but again, it’s never all that clear. Also, Gwenyth Paltrow has significantly less to do this time around, and Rebecca Hall’s character is complete filler, especially odd considering her role in creating the Extremis virus that is so central to the film. The first scene of the film hints at her being significant, both to the plot and to Tony personally, but three quick scenes later and she’s gone. This is Stark’s show after all, and it must go on.

It’s a technically superb as you’d imagine, with lots of great visual and sonic moments throughout. The suits have never looked better in the series, and the Extremis soldiers are a welcome change from the usual mechanical bad guys of the franchise. Likewise, Tyler Bates’ score is about as epic as possible, and perhaps not getting enough credit here. Like Alan Silvestri’s Captain America score, it creates a memorable, recurring theme for Iron Man, with lots of cool variations throughout. The Marvel Studio films have always caught flak for a lack of iconic music, but there’s great stuff here. If I had to single out one issue with the visceral qualities, it would have to be the odd decision to shoot nearly every action scene at night.

Yes, it helps to highlight the glowing bodies of the Extremis soldiers, but it doesn’t help the look of the armors. As seen in all the trailers, the big finale consists of Tony remotely summoning dozens of suits to his aide, each one with a unique design and specialty. But the scene never gets to really showcase them, because all we can really see are the glow of their eyes and rocket trails. It’s an exciting and fun set piece, but it doesn’t take advantage of real conceptual potential.

Iron Man 3 may not be perfect, but neither is its hero, and in a film as thematically sound and well executed, it’s hard to get hung up on a few problems when it’s this much of a joy to watch. It just goes to show that when Marvel leaves a writer in charge, these movies can be pretty great, and hopefully it’s a trend they continue to embrace.