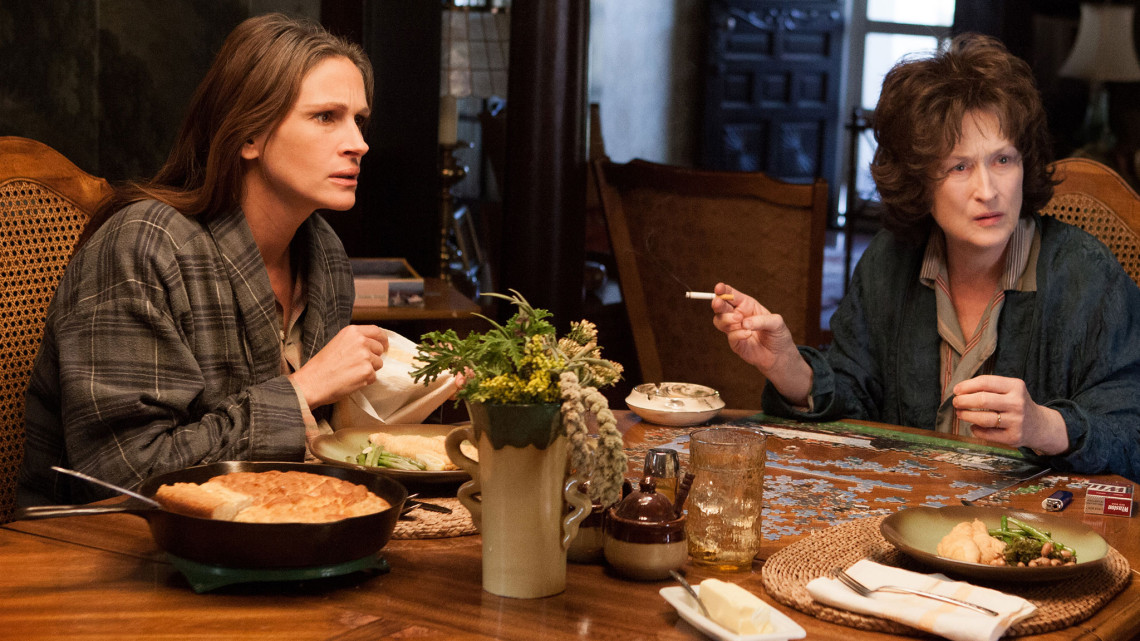 In ‘August: Osage County,’ Disorder Runs In The Family

On the poster for the film adaptation of Tracy Letts’ Pulitzer-winning play August: Osage County, the tagline reads, “Misery loves family.” That’s more honest than the rest of the film’s promotional campaign, in which The Weinstein Company seems determined to disguise it as a feel-good family drama, despite the fact that it’s anything but. Tackling subjects such as alcoholism, drug addiction, suicide, and incest among other taboo subjects, this family reunion from hell is wildly uneven and quite tough to sit through at times. Yet, as someone who is unfamiliar with the original stage production, there’s so much talent on display here that it was hard for me to take my eyes off of the emotionally charged and sometimes wickedly funny domestic disputes that escalate into pure chaos.

Meryl Streep leads the uniformly excellent cast as Violet Weston, a viciously crass old woman who’s dying from mouth cancer and has become addicted to painkillers as a result. Following the disappearance of her caretaking husband, Beverly (Sam Shepherd), Violet’s three daughters return to their childhood home in Osage County, Oklahoma. Barbara (Julia Roberts), the oldest, arrives with her husband Bill (Ewan McGregor) and their angst-ridden teenage daughter Jean (Abigail Breslin), who attempts to conceal from the rest of their family that her parents recently separated after Bill’s affair with a younger woman. The ditzy, hopelessly optimistic Karen (Juliette Lewis) arrives with her sleazy fiancé Steve (Dermont Mulroney), who narcissistically discusses little more than their upcoming wedding in Florida, despite the fact that they are the farthest thing from a match made in heaven. And Ivy (Julianne Nicholson) is secretly in love with her cousin, Little Charles (Benedict Cumberbatch), who is adored by his father Charlie (Chris Cooper) but constantly scorned by his mother Mattie (Margot Martindale).

Due to the multitude of characters, the melodrama is almost non-stop. Several scenes consist of these people bickering, screaming, breaking dishes and emotionally abusing one another with little sense of remorse. This could have been insufferable were it not for Letts’ salacious, exquisitely crafted screenplay that’s sharp enough to draw blood, as well as the electrifying performances from its ensemble cast.

Streep is clearly having a blast playing the despicably vile matriarch of the family. Her scathing delivery of Letts’ dialogue is both uproariously funny and devastatingly cruel, layering her familial scorn with a perfect pinch of dark humor. Even when her performance becomes so over-the-top that it veers into pure camp, she’s a total hoot, and miraculously conveys an empathetic sense of vulnerability beneath her contemptuous shell.

In her juiciest role since Closer, Roberts is equally impressive as Barbara, who like her mother is blinded by rage and self-loathing. Both she and Violet are unable to comprehend how they alienate themselves even further by projecting their inner anguish onto the people they love. These women want nothing more than to blame everyone around them for their pain, because they’re sick to death of hating themselves.

As for the supporting players, Margot Martindale and Chris Cooper steal many of the scenes they’re in, Juliette Lewis shows off some great comedic chops as the dimmest of the three sisters, and Julianne Nicholson is heartbreakingly earnest as the most humane character in the film. Unfortunately, because this film adaptation has condensed the three-hour play down to two, some characters feel underdeveloped. It’s never quite clear what led Ewan McGregor’s Bill to commit adultery, Abigail Breslin feels like a caricature, and Dermont Mulroney is a scumbag with no real depth or redeeming qualities. The performances are all quite strong and the writing is always convincing, but not everyone is as fleshed out as they could be, as if their pivotal scenes from the stage production had been left on the cutting room floor (or removed from the screenplay entirely).

The darker the film gets, the more compelling it becomes, which is too bad, considering that director John Wells isn’t brave enough to go all the way when it comes to exploring these characters’ descents into madness. The past two film adaptations of Letts plays, Bug (2007) and Killer Joe (2012) were directed by William Friedkin, most notoriously known for The Exorcist (1973). Friedkin was not only able to translate these works to the screen with visceral, cinematic grandeur, he was also uncompromising in his depictions of controversial material, mercilessly capturing all of the psychological horror that was necessary to the stories’ characters and themes.

August: Osage County isn’t as extreme as Bug or Killer Joe, but Wells still plays it too safe, as if he’s trying to compose an edgy, radical art-house film that simultaneously won’t scare off mainstream audiences and Academy voters. Much like the picture’s theatrical trailers and television spots, Wells feels the need to provide viewers with a sense of optimism, as if he’s paranoid that they’ll be turned off by the emotional brutality of the source material, making the film a tonally jarring mess.

The movie works best when it sinks its teeth into meaty, pitch-black humor, but it loses its bite when Wells attempts to provide any sort of dramatic poignancy. Shot mostly through medium shots and close-ups, it’s as if he seemed unsure of how to frame the story in any sort of visceral, cinematic style. Even worse is the score, which is shameless in its attempt to manipulate the audience’s emotions, resulting in several scenes feeling contrived. Such a talented cast doesn’t need a schmaltzy piano ballad to help convey emotional impact.

Still, while it’s not the masterpiece it could have been, August: Osage County’s strengths ultimately outweigh its flaws. Even with an infuriatingly tacked-on “happy” ending that heavily differs from the play, Letts’ deliciously dark script and the A-list cast save the film from several lackluster directorial decisions. It may come as a disappointment to those who are familiar with the stage production, but as a newcomer to this story, I found there to be just enough rich, complex material to chew on here.