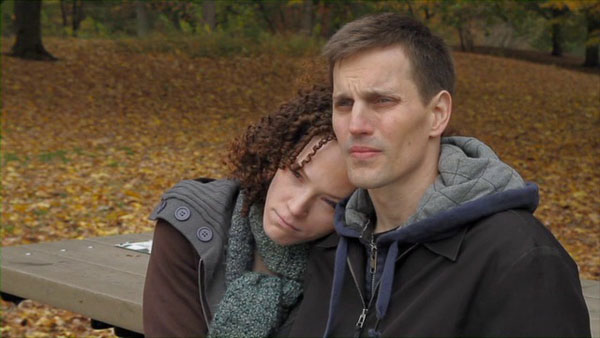 I hate to pick on the little guy. Low budget indies can’t compete with Hollywood for production values and the money that buys big name talent. But when a movie as bad as Gut comes around, I have to through budget out the window. No amount of money could have saved this picture.

Tom (Jason Vail) is a straight-laced family man whose life has come to a stand still. (You can tell he’s in a rut because he’s constantly staring at the ceiling while in bed). Dan (Nicholas Wilder) is his goofy best friend. (You can tell he’s goofy because he wears glasses and loves horror movies). Tom and Dan’s mutual love of horror movies gets them in trouble when Dan begins receiving unmarked DVDs of snuff films. For some unknown reason, these films–of women’s bellies being sliced open and a man’s hand inserted into the wound (really)–help distract Tom from his perfect life with a sexually adventurous wife and angelic young daughter. They even help Dan gather the courage to ask out the cute waitress at their local diner. For a while, everything is going fine for these middle-class, clandestine perverts.

Gradually, however, Tom begins to realize that his attraction to these snuff films is psychotic and is haunted by disturbing visions of his dissected wife. Tom asks Dan to destroy the films, but it’s too late! They’ve already wreaked deadly consequences!  The madman behind the videos has stalked Tom and Dan and begins to dismantle their lives piece by piece.

Originally I thought the long takes in Gut were a directorial decision meant to emphasize the tortured interiority of the lead characters and the meditative, wrenching decisions they must make as they descend further into madness. But then I realized that writer/director Elias (one name, like Cher) just doesn’t know how to cut a movie. Gut could probably have made an interesting thirty-minute short film, but stretched over an interminable run time, the film becomes unbearably slow. 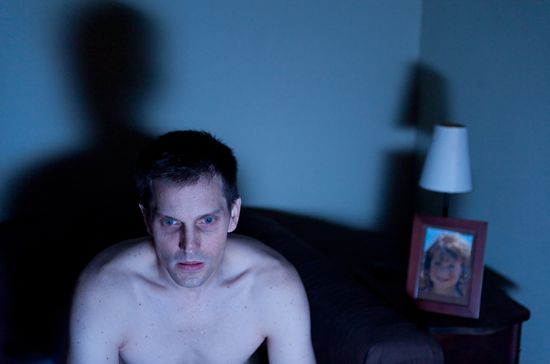 Vail and Wilder do their best with the familiar plotting and cliche dialogue, but Elias seems obsessed with having his characters staring off into space, brooding intently, and sitting in silence. The decisions here are just awful and the whole endeavor comes off as amateurish and silly. Even the scenes of the vivisections themselves aren’t sufficiently compelling or repulsive to provoke the emotions displayed in the film. When a horror movie doesn’t provide any horror, you know you’re in trouble.

Gut ends on an ambiguous note that it doesn’t earn, despite an earnest attempt at cleverness. The talent just simply isn’t there behind the camera. The film does look good however, thanks to some talented cinematography by Trent Ermes. Unfortunately, the beautifully composed frames are tantamount to dead fish. I don’t believe Elias moves the camera even once for the entire film. The entire production is static and immobile, an unbelievably poor choice that makes ninety minutes feel like three hours.

GUT is now available On Demand in the US and Canada.