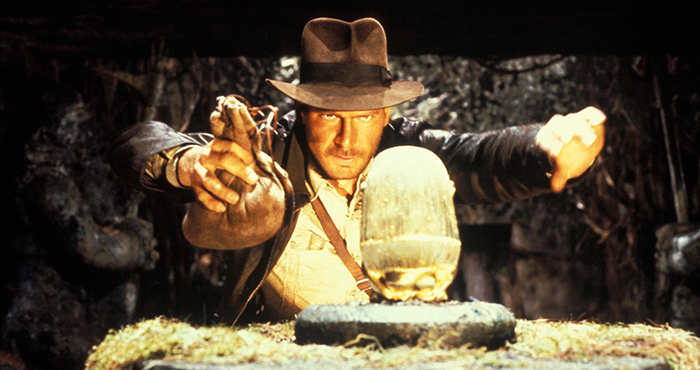 History of Film: Steven Spielberg’s ‘Raiders of the Lost Ark’

“What’s your favorite movie?” tends to be a haphazard, superficial question. We tend to answer superficially in kind: a quick title drop followed by some general qualifications. It’s always felt like a disservice to the objects of our cinematic affections because a favorite movie is a very deep, personal thing.

By that I don’t just mean how we traditionally conceive of a favorite: a simple subjective choice. It seems like cinephiles (myself included) don’t talk about it much, but the reasons we cherish particular movies above others are frequently very personal. It’s not a matter of films simply aligning with our generalized tastes. It’s a matter of them tapping into or reflecting something far more fundamental of ourselves. With time our favorites can embed themselves into the trajectory of our lives; transcend personal preference to become historical artifacts that link our own stories.

I. I loved Raiders of the Lost Ark before I had ever seen it. Because the popularity of Raiders means its images, character, and story always precedes it, the appeal of Indiana Jones had established itself in my consciousness long before my overly protective parents let me watch a movie where angels melt people’s faces off. Finally seeing Indy’s first adventure may have felt like a confirmation of the inevitable, but it was no less a revelation.

II. In a funny way, Raiders of the Lost Ark is the reason I write. In 8th Grade our English teacher made us write a short story. As I proceeded to eagerly rip-off the opening of Raiders – complete with daring archeologists, trap doors, impalements – I discovered the process of writing didn’t feel like homework. Something clicked, excitement spilled out. Which is why, despite being painfully shy, I immediately volunteered to read my story in class. The violence in it wasn’t anywhere near budding-serial-killer levels, but certainly gruesome by 8th Grade standards, which is why there was audible and visible repulsion in the classroom as I read. That sealed it for me. I had created something (well, sort of plagiarized) that had produced reactions, had – through the power of writing – affected people. All these years later, I’m still pursuing that. 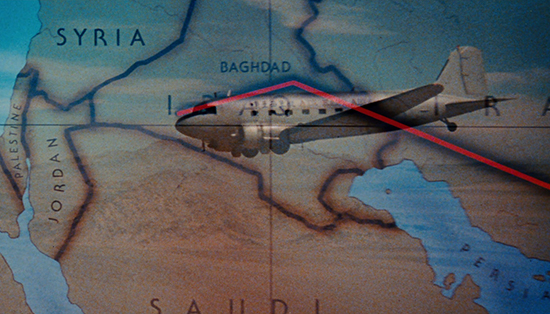 III. If I were to visually represent the first fourteen years of my life, all the moving I did with my family might very well look like an Indiana Jones map with that red line constantly crisscrossing the globe, halting briefly in places before moving onto somewhere else. It was a difficult time for me, and eventually after my third country, fifth home, and sixth school I shut down and gave up on attaching myself to my new environment. It all seemed too hard and pointless. Then I saw Raiders of the Lost Ark. Here was this man whose serial adventures seemed representative of how I felt: perpetually hopping from place to place, thrust into one new challenging situation after another. Except his obstacles were even more insurmountable than mine, and he overcame all of them triumphantly. Here then was a hero I could learn from; a hero I could try to be more like.

IV. I’ve dressed up as Indiana Jones for Halloween three times in the last five years. I like to let people believe it’s because I’m too lazy and cheap to buy new costumes, but it’s really because of how damn good I feel being Indiana Jones just for a little while. I’d be lying if I said I wasn’t wearing the fedora right now for inspiration.

V. The manager who hired me to work for Blockbuster – my first real job – informed me later that the main reason he gave me the gig was because I cited Raiders of the Lost Ark as my favorite movie during my interview.

VI. Once I was dating a girl who had never seen Raiders. Wanting to share something I deeply cared about, I showed it to her. Afterwards, she told me she didn’t like it. Then she dumped me. As one’s prone to do post-dumping and post-a few too many heartbreaks, I started to give up on the idea of ever finding someone after that. It remains a testament to the unshakable adoration I have for Spielberg’s film that it hasn’t been soured by the negative association.

VII. In an inconstant life that’s left me wary of change, Raiders of the Lost Ark – and my affection for it – has remained one of the most constant, unchanging things in it.

VIII. A year and a half after that breakup, I was sitting in a theater watching the movie for the first time on the big screen. I was also seeing it for the first time with the woman I am going to spend the rest of my life with. The occasion was my 30th birthday, and at her suggestion we had travelled all the way from Toronto to Boston to see the 70mm IMAX release of Raiders. As the movie was projected in a way I’d always dreamed of seeing, the overwhelming joy I felt wasn’t just for the film – it was for the realization that I had been wrong to think I’d never find the person sitting next to me. 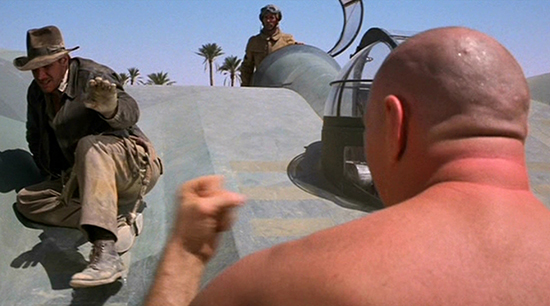 IX. I don’t usually admit this, but I’ve always secretly cherished the false belief that I get a little more out of Raiders of the Lost Ark than most other people. As a fluent German, being able to understand the Nazi henchmen’s inconsequential asides has long made me feel like I’m privy to a part of the movie others can’t as naturally access. It’s not that knowing precisely what the brutish, shirtless airplane pilot is saying to taunt our khaki hero makes me feel like I’ve reached a higher rung of Indiana Jones affection. It’s simply a matter of feeling like something that’s widely loved by many people is, in a very minor way, somehow more uniquely mine.

X. Lastly, I don’t watch Raiders of the Lost Ark the way I watch other movies. I can analyze, dissect and evaluate almost any film with a certain distance to ascertain its strength and weaknesses. I can burrow so deep into films that I find themes and subtexts that only make sense to me. I can’t do any of that with Raiders. I can’t distance myself. Watching it is all drifting away and feeling and experience. I’ve seen it over 50 times, and it’s never buckled beneath the risks of overexposure. It never feels worn, or boring, or any less the film it was to me all those years ago when I first saw it. It is, however, more. It is now a part of memory. It may not be autobiographical, but it’s no less autobiographic to me. Time, inevitably, will make my favorite movie even more so.

5 thoughts on “History of Film: Steven Spielberg’s ‘Raiders of the Lost Ark’”