History of Film: Spike Lee’s ‘Do The Right Thing’ — Dynamite Under Every Seat

Do the Right Thing is currently #5 on my all time best movies list. It was my best film of 1989 as well, earning the top slot after my emotional first viewing of it at Jersey  City’s State Theater. The State is where I was introduced to director Spike Lee’s work. I saw She’s Gotta Have It and School Daze there, and I’d see Mo’ Better Blues, Jungle Fever, Malcolm X and Crooklyn there as well.

At all of these Spike Lee joints, I sat with the same kind of audience. We were a predominantly young, Black crowd, occasionally rowdy and unafraid to talk back to the screen if that were required. This was what I’d been accustomed to since the early 70’s when I started attending the State. Seeing Black faces onscreen seemed to bring out the vocal best and worst in people.

Lee’s films gave the audience much to talk about. The Straight and Nappy number from School Daze stunned the crowd into silence; when it was over, the applause was thunderous and rowdy. The sex scenes in She’s Gotta Have It were met with the same rabid, overrated approval the film itself received from critics. And whenever Denzel or Wesley had a close-up in Mo’ Better Blues, it elicited sighs from the sistahs. Denzel’s Malcolm X speeches got “hallelujahs,” and I wasn’t the only one weeping with pangs of nostalgia at Crooklyn’s recreation of the ghetto street games of my youth.

You can imagine how well Do the Right Thing’s opening credits sequence went over. Everybody in that theater already knew who Rosie Perez was. “It’s that chick from Soul Train,” I heard a voice behind me say. And we also all knew Public Enemy, the rap group that accompanied Ms. Perez as she energetically danced around in boxing gloves and other attire. Spike Lee is one of the few filmmakers who still pays attention to opening credits sequences, using them to set the tone of his films.

Do The Right Thing’s credits sequence promised a funky, colorful,  sexy film with a hip-hop sensibility. It also promised more sobering thought; Fight the Power isn’t the first musical cue played in Do The Right Thing. As the grungy, old Universal logo appears, it’s accompanied by a saxophone solo of “Lift Every Voice and Sing.” This precedes Public Enemy, who break in just as the solo plays the line “let it resound loud as the rolling sea.”

If you’ve seen Do the Right Thing, you know it ends with a murder, a race riot, and two opposing onscreen quotes, one by Martin Luther King, Jr., and one by Malcolm X.  These elements do not come out of nowhere. Lee, his actors and his cinematographer Ernest Dickerson slowly ratchet up the tension as the film progresses. Dickerson in particular is a great co-conspirator; his lensing and colors make the viewer feel as hot as the people onscreen. When the murder and the riot do occur, I was stunned but not surprised. Lee presents it as a horrific event, with Ruby Dee and Ossie Davis bringing the weight of their own civil rights history into the frame by default. The lazy, humorous and casual tone of the earlier scenes is absent here. 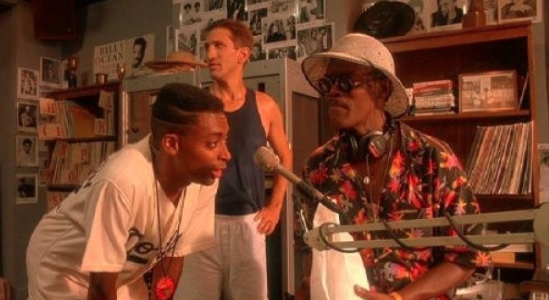 Dissertations have been written about what all this means. You can go read those. What I want to focus on is the initial critical reaction to Do the Right Thing, and how the media still chokes on complicated and/or sympathetic portrayals of minorities. What I have learned from 43 years on this Earth, 40 of which have been spent at the movies, is that minorities cannot be depicted in a complicated fashion onscreen without problems. I can only imagine what fresh Hell would have erupted had Do the Right Thing been released today, with Twitter and Fox News the breeding grounds for the same scared racial hysteria 1989’s critics of Do The Right Thing said Lee was employing. Thankfully, in 1989, we only had TV and the print media for this to play out.

I think the race riot and the order of those quotes is what made many in the White critical media lose their damn minds and break out in rashes of panic. Lee puts King’s quote first, then Malcolm’s. To totally oversimplify, King’s quote is “good cop,” and Malcolm’s quote is “bad cop.” If you knew nothing of the content of the latter’s quote, based on the reviews of people like Jack Kroll, David Denby and Joe Klein, you would have expected it to say:

Instead, this is Malcolm X’s quote:

“I think there are plenty of good people in America, but there are also plenty of bad people in America and the bad ones are the ones who seem to have all the power and be in these positions to block things that you and I need. Because this is the situation, you and I have to preserve the right to do what is necessary to bring an end to that situation, and it doesn’t mean that I advocate violence, but at the same time I am not against using violence in self-defense. I don’t even call it violence when it’s self-defense, I call it intelligence.”

This, along with the destruction of Sal’s Pizzeria, was seen by some reviewers as a blank check for Black audiences to kick some White ass. White audiences who saw Do The Right Thing would get that this isn’t Lee’s message, but those Black viewers are way too simple to process the complexities Lee is invoking. In Newsweek, Kroll had my favorite quote, one that, if Lee were truly the provocateur he’s constantly made out to be, should been have used in big-assed block letters on the poster. “People are going to argue about this film for a long time. That’s fine, as long as things stay on the arguing level. But this movie is dynamite under every seat.”

Dynamite under every seat! Universal’s Sensurround massaged your balls from under the seat. Do The Right Thing‘s Nigrurround, made from explosives instead of speakers, was going to blow them off your body! This is almost as good as “history written with lightning,” the famous response to Birth of a Nation. Birth of a Nation did, according to reports, spike membership in the KKK, which was apparently a good, promotable thing in 1915. After all, that quote reportedly came from the President of the United States. Lightning good, dynamite bad. Don’t tell Jimmie Walker.

Denby also uses the word dynamite in his review: “Lee’s playing with dynamite in an urban playground. The response to this movie could get away from him.” Of the murder that causes the riot, he doesn’t even identify the victim, Radio Raheem, whom he’d earlier called “a fool” and “a bruiser with a woodblock face.” Of the murder, Denby says “when some white policemen arrive and kill a black boy, the crowd, enraged, riots.” This lack of identification removes why the neighborhood would rebel. For better or worse (and I personally found Radio Raheem annoying as hell), Radio Raheem was a fixture in the neighborhood, known and loved by the community. Most importantly, as no critic I cite here points out, Radio Raheem did not deserve to die. Whether it was a radio, or Skittles, or a wallet, these victims did not deserve to die. 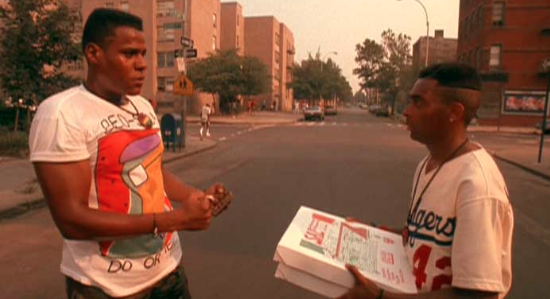 This empathy is completely missing, which is depressing because Denby actually make some interesting, valid points about Do the Right Thing. They’re overshadowed by his tone and word choice. He accuses Lee of crafting the riot as a stand up and cheer moment for Blacks, which is an insult because it means that, indirectly, Blacks are cheering yet another murder of an unarmed Black man. Denby ends:

“If an artist has made his choices and settled on a coherent point of view, he shouldn’t be held responsible, I believe, if parts of his audience misunderstand him. He should be free to be ‘dangerous. But Lee hasn’t worked coherently. The end of this movie a shambles, and if some audiences go wild, he’s partly responsible.”

So, if I go into the ocean and bite some White woman on her ass, should Spielberg be blamed for that because he made Jaws? Please say yes, because I see one hell of a bitten-ass White woman lawsuit coming Stevie’s way.

Neither Kroll nor Denby, both of whom did have some good things to say about Do the Right Thing, could compare to Joe Klein. Under the guise of worrying whether New York mayoral candidate David Dinkins would lose because of Lee, Klein wrote:

“Dinkins will also have to pay the price for Spike Lee’s reckless new movie about a summer race riot in Brooklyn, Do the Right Thing, which opens in June 30 (in not too many theaters near you, one hopes).”

As a Black teenager, I found Klein’s article the most offensive of all, for he made me, a 19-year old college senior, out to be so fucking ignorant that I couldn’t tell the difference between a movie and reality:

“All these subtleties are likely to leave white…audiences debating the meaning of Spike Lee’s message. Black teenagers won’t find it so hard, though…The police are your enemy…White people are your enemy, even if they appear to be sympathetic.” 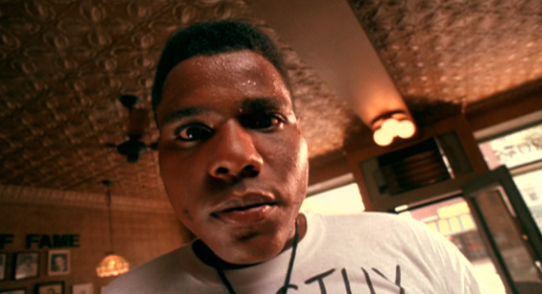 Believe me, the Black folks who think the police are the enemy have a history that existed well before Shelton Lee was swimming in Bill Lee’s nuts. Klein conveniently forgets to mention the reason for the aforementioned potential beliefs: the murder of Radio Raheem. Again, no empathy for the death of an unarmed Black man.

I could have come out here and written a piece about how wonderful Do The Right Thing is, about how it’s the most honest depiction of race relations I’ve ever seen, and how it’s finally gotten its due as a classic. But after reading this review of Fruitvale Station, I was reminded of how not much has changed in terms of some critics relating to characters who are brown. Or gay. Or female. They are all devalued by the mainstream.

Incidentally, my rowdy audience at Do The Right Thing did not cheer the riot, nor did one break out at the end. Like me, they left having seen a reflection of their own lives onscreen. It was a sad, angry and bittersweet reflection, but we were happy to be able to look in the mirror.

And the 1989 movie that should have caused a riot was Driving Miss Daisy, which reminded me and others like me just how Hollywood likes their Negroes. I eagerly await the Driving Miss Daisy piece that quotes me saying this.

3 thoughts on “History of Film: Spike Lee’s ‘Do The Right Thing’ — Dynamite Under Every Seat”