History of Film: “Dr. Strangelove or: How I Learned to Stop Worrying and Love the Bomb”

I’ve always wondered about the scroll of words at the beginning of 1964’s Dr. Strangelove or: How I Learned to Stop Worrying and Love the Bomb. They’re so important they precede the Columbia Pictures lady:

“It is the stated position of the U.S. Air Force that their safeguards would prevent the occurence [sic] of such events as are depicted in this film. Furthermore, it should be noted that none of the characters portrayed in this film are meant to represent any persons, living or dead.”

Did the U.S. military actually force the filmmakers to put that onscreen? If so, it’s not exactly a comforting reassurance to Cold War-era audiences already freaked out by the Bay of Pigs and “Duck and Cover” public service announcements. And does the latter part of the disclaimer extend its representation protections to the Russian and the Nazi characters? And what about that misspelling?

I could look this information up, but honestly, I like to think Stanley Kubrick is putting us on. That scroll fits perfectly with the next set of images we see: Dr. Strangelove presents its opening credits over footage of a B-52 refueling in mid-air. Scored to an airy version of “Try a Little Tenderness,” the blatantly phallic extension of one plane penetrates a hole in the top of another. Now connected, the two entities bob up and down, swaying in a sexual motion. It’s downright pornographic–you can imagine the cast of Disney’s Planes covering the eyes of their kids in horror. It’s also eerily prescient; by the end of Kubrick’s uproarious Cold War masterpiece, the human race is as screwed as those two planes.

Dr. Strangelove originated as a straight drama based on Red Alert, a book by Peter George. Kubrick’s concern about nuclear war led him to read over 50 books on the subject. After several cracks at a serious dramatization, Kubrick wisely decided to go the humorous route. His rationale was that the message would sink in better if presented as black comedy. The real-life notion that world destruction was obtainable by the itchy trigger fingers of two superpowers was itself absurd, and while Kubrick and his co-screenwriters Terry Southern and George stretch the scenario to its full satirical limits, it never once falls outside the terrifying realm of possibility.

Despite all the randy phallic imagery that populates the film, Dr. Strangelove is actually a satire about literal and figurative impotence. The Cold War is depicted as one big dick-measuring contest, and while Russia and the United States are jockeying to see who wields the more powerful pocket rocket, a crazed Brigadier General named Jack D. Ripper sets in motion a plot to start World War III. Ripper’s reason for resorting to Top Secret Plan R is rooted in erectile dysfunction. To prove his manhood, he’ll bypass the President’s nuke launching authority, force his own men to open fire on their fellow military colleagues and drive his British Royal Air Force right-hand man Lionel Mandrake (Peter Sellers) to the brink of sanity. Mandrake teeters on the edge with a hilariously proper British air.

Brig. Gen. Ripper (a superb, drily funny Sterling Hadyn, who came out of retirement for this) issues his orders to his base and his pilots while clenching a huge cigar between his teeth. Kubrick shoots his major close-ups from below, making the cigar an even bigger overcompensation for the loss of the “precious bodily fluids” Ripper noticed were missing “during the act of lovemaking.” Ripper blames “Commies and fluoridation” for his manhood problems, and decides to bomb Russia. He commissions his commanding officer in the sky, Gen. King Kong (Slim Pickens) to lead the bombing and force the hand of the Russian government.

“War is too important to be left to the politicians,” he tells a mortified Mandrake. 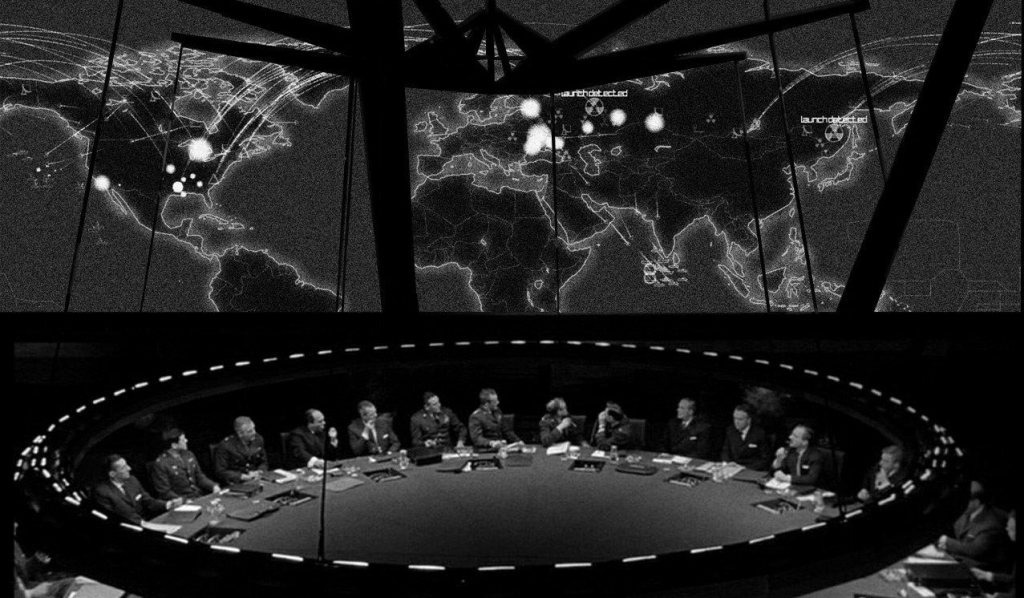 Speaking of the politicians, they’ve all been called to the President’s war room to determine what to do about Plan R. One of Plan R’s provisions allows Ripper to do something only the President should have the ability to do. When President Merkin Muffley (Sellers again) inquires as to how the hell that’s possible, his details man Col. Buck Turgidson (a gloriously over-the-top George C. Scott) explains that “Plan R was approved by the President.” Guess he didn’t read the fine print before signing off.

Plan R is a masterpiece of “we thought of everything” planning. Almost every attempt to thwart it is ultimately futile, and a well-timed blast to one of Ripper’s B-52’s takes care of the one attempt Plan R doesn’t cover. Here is a piece of government planning that actually works, that’s smart enough to resist all methods of repeal, and it winds up the primary cause of the end of the world as we know it.

As if Plan R isn’t enough of a problem, President Muffley also has to deal with the rumored “Doomsday Device” built by the Russians. This world-destroying device was built based on a rumor reported by the blabbermouth New York Times. Muffley hears of the device’s existence from the Russian ambassador Alexi de Sadesky (Peter Bull). When not taking calls from his mistress (Miss Scott, the only woman in the film, played by Sir Carol Reed’s daughter, Tracey) Turgidson wrestles with de Sadesky over concerns that the latter is spying. This leads to President Muffley uttering the funniest line in the history of cinema: “Gentlemen, you can’t fight in here! This is the War Room!”

The War Room, where much of Dr. Strangelove takes place, is a masterpiece of set design by Ken Adam. It has a 35 foot high ceiling, an enormous lighted map of the world and a huge round table covered in the green material one would find on a poker table at the casino. (The black and white cinematography by Gilbert Taylor renders this moot, but no matter.) Adam’s design was convincing enough as a plot device to fool Ronald Reagan, who wanted to see the fictional room once he got elected President. If you look closely, it’s also equipped with the numerous pies that were used in the original ending of Dr. Strangelove.

President Muffley makes several phone calls to the Russian president, whom he refers to as “Dmitriy.” Dmitriy, whom we never hear, is drunk and at some kind of orgy when Muffley calls him, and Sellers’ improvisational genius clearly had an influence on the master of scripted cinematic phone calls, director James L. Brooks. Sellers as Mandrake also gets to make a phone call (to himself as Muffley), and while we don’t hear that conversation, it is preceded by Keenan Wynn’s great cameo as a hardnosed, somewhat idiotic  soldier. Wynn’s refusal to disrespect a piece of product placement may be the most satirical thing in Dr. Strangelove. To Wynn, the Coca-Cola Corporation is more important than stopping a nuclear holocaust.

Dr. Strangelove, the former Nazi engineer who changed his name once he became an American citizen, appears 53 minutes into the movie that bears his name. Forming the triumvirate of Sellers performances, he’s the id to Muffley’s superego and Mandrake’s ego. In describing how to stop worrying and love the bomb, Strangelove brings to the forefront the undercurrent of the film’s macho sexuality, an element that Ripper has too little of, and of which the horny Turgidson has too much. Strangelove’s description of the pure, masculine sexual nirvana that will exist post-nuclear war intrigues the men in the War Room enough that they barely notice Strangelove has a hand that he cannot control. The hand keeps making the Nazi salute, and at one point, attempts to strangle its owner. (Sellers got the black glove he wears on that hand from Kubrick’s private collection, so it’s as if the director is strangling his Oscar-nominated star.)

Even if you haven’t seen Dr. Strangelove, you’re probably familiar with its iconic image of Slim Pickens’ Gen. King Kong yee-hawing as he rides into oblivion on a nuclear missile that says “Hello There” on the back of it. His multi-racial crew (including James Earl Jones in his debut) mans the only plane to succeed in its mission, as if the film were saying that every race had a hand in this. The famous ride of General Kong can only usher in the very dark ending Kubrick used to replace his original idea of a War Room pie fight. In brilliant counterpoint to its mushroom cloud imagery, Dr. Strangelove plays Vera Lynn’s version of “We’ll Meet Again” over the ending. You don’t know whether to laugh or cringe.

Of the many films considered great satire, only Dr. Strangelove holds up as a masterpiece with none of its bite removed. Shampoo is too dated, and the disturbing accuracy of Network renders it a documentary nowadays. But the threat of Earth-altering repercussion from a “Top Secret Plan R” still hangs over us, U.S. Air Force disclaimer be damned. Kubrick’s film remains hilarious, but we laugh as loudly as we do nervously.

One thought on “History of Film: “Dr. Strangelove or: How I Learned to Stop Worrying and Love the Bomb””